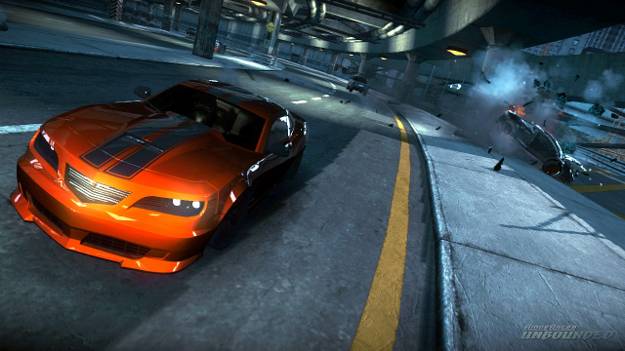 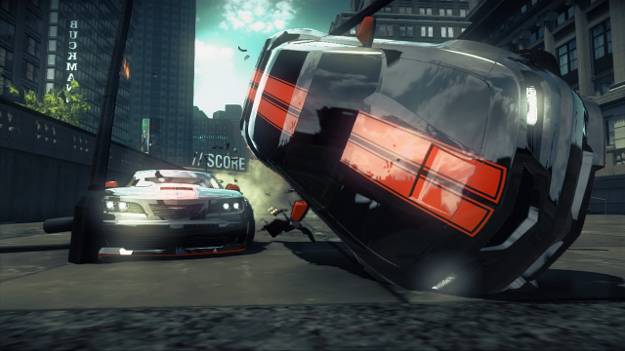 When it comes to video games and racing, there are often two camps a title can fall into. The first is where a game leans more towards a realistic driving simulation, where emphasis is placed on physics and how the car feels and reacts to the track. The other is where a game throws physics out the window, tells Newton and his laws to take a hike and pays no mind to how cars actually drive. When it comes to Ridge Racer Unbounded, it most certainly falls into the latter category.

With that clearly pointed out, you then have an idea of what to expect when it comes to Unbounded. A fast paced title that plays completely like an arcade racer, where your main goal is going fast and destroying your opponents. Fine tuning your angle as you turn around the corner is far from necessary and races are won by slamming down on the throttle and not letting go. 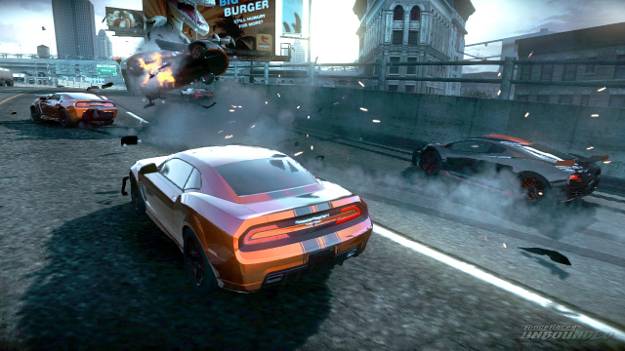 Aside from slamming down the pedal and going as fast as you can, Unbounded has a few other important elements. Your ability to drift will not only aid you in taking corners more efficiently, it also helps you build up your power meter. Also important to building up your power meter is destruction, be it smashing into random pillars or hitting debris around the track. Once you have maxed out this power meter, you are granted a speed boost that takes affect for a short period. With this burst of speed, if an opponent is unfortunate enough to get in your way, you will destroy their vehicle. This is a double edge sword though as if you're in the path of an opponent when they use their power burst, you too will be 'fragged'.

The method by which you acquire juice to power up your abilities also points out how arcade like and far from realism Unbounded is. In other racers, hitting a brick post would likely cause you to wreck, or at least severely damage your car and slow you down. In Unbounded though, you simply drive through solid objects, doing little to anything to slow you down or affect your race. This helps if you're a speed junky and want to drive fast, but if you desire even a remote sense of realism, you will likely be disappointed. With that said the experience of driving in Unbounded is far from bad, in fact, it's enjoyable, but any and all elements of realistic feel seen in games like Forza, Gran Turismo, or even games like Project Gotham Racing are absent.

This comparison to other games also brings up another relevant point about Ridge Racer. Once you load up the game and start playing, you can easily see striking similarities to other games in the genre such as Split/Second, Blur and even the Need for Speed series. Granted it is difficult to innovate within a genre such as racing, but Unbounded fails to innovate in any way or introduce any new elements to the genre. This fact isn't a negative as Unbounded still represents the arcade racing genre well, but it may leave you wishing for something just a bit different than what you've seen before.

As for a story, well, where you'll be going you don't need a story. Ridge Racer Unbounded starts with a premise that somewhat represents a storyline, but after that it kind of disappears. Not to say racing games need a story, but having additional elements to your game, especially if they're done well can help differentiate a title from its competitors and allow it to stand out as more than just another entry into the genre. 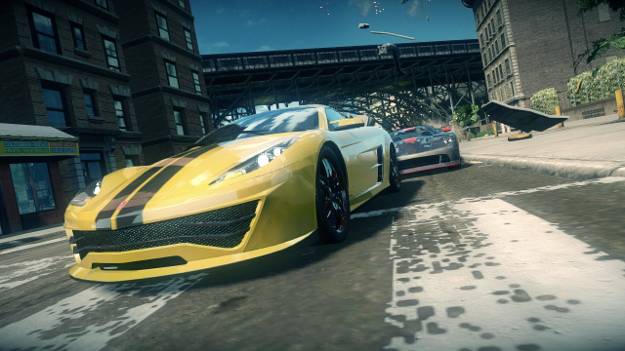 In terms of event types, there are all the usual suspects. Events like time attack, domination, and drift all make their expected appearance and do little to spice up the usual formula of how these race types are done. The exciting part of Unbounded comes in the vehicles you will race and the different locales you get to drive them in. The vehicles you will use all look slick and stylish. Although not cars that exist in the real world, they do resemble high end cars that would likely cost millions. Models look great, have a high level of detail and are definitely a blast to drive. Along with these fancy cars are an assortment of locations to drive around Shatter Bay. These can range from dense city streets as you fly by market stands and store fronts, to the looming shadows of skyscrapers as you battle your opponents for first place. Ridge Racer does a great job of mixing up locations so that you never get to familiar with your settings.

Ridge Racer also has an innovative way of doing multiplayer, which will likely add longevity to the title as well as spur creativity. Along with a track creator that will allow you to create or tweak existing tracks, each user is allowed to create their own uniquely named city. Within these cities users can create tracks and fill it with different event types. This allows for online players to search through different user created maps allowing for limitless permutations and alternations to maps. Of course, if you want to play the official tracks you're able to play within Shatter Bay, the same city the single player component takes place, along with up to 7 other players on either PSN or XBL.

Visually Ridge Racer looks solid, with detailed environments filled with objects and the noise of the roaring engines as you fly down the streets in your high end cars. The environment blurs appropriately when you decide to use your power boost, and the game engine does a good job of giving you a sense of speed. The one knock on the visuals may be the way in which it cinematically handles crashes. If you take out an enemy or are taken out yourself, the camera zooms in and goes into slow motion. This of course can be skipped, but still may distract you from the race at hand. Unbounded also sports a solid list of songs that will put you in the mood to race fast as well realistic sounding vehicles which help immerse you in the moment.

Although the extremely arcade feel may dissuade some racing fans who appreciate a dash of realism in their driving games, Ridge Racer: Unbounded remains an exhilarating experience filled with explosions, over the top drifting and high speed racing. A perfect combination for those of us who want to break speed limits and drive excessively fast without getting a ticket. Ridge Racer may not introduce anything new to the genre, but it's still worthy of your attention if you're a racing fan. A custom track creator promises to keep producing new content far down the road so there's plenty to sink your teeth into with this game. If you are a fan of the racing genre and prefer to live on the arcadey side of the road, Ridge Racer Unbounded is a solid title to add to your collection.