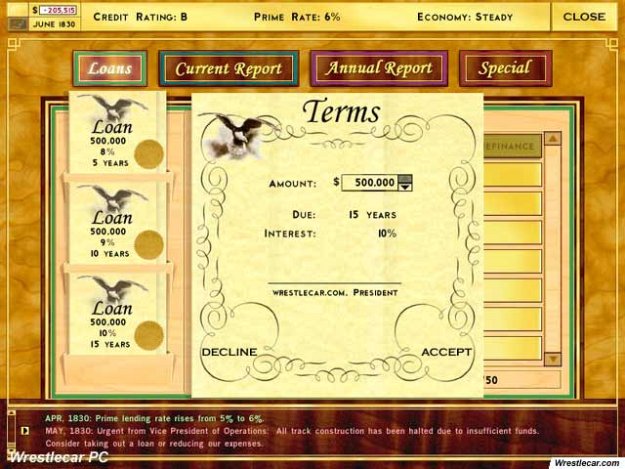 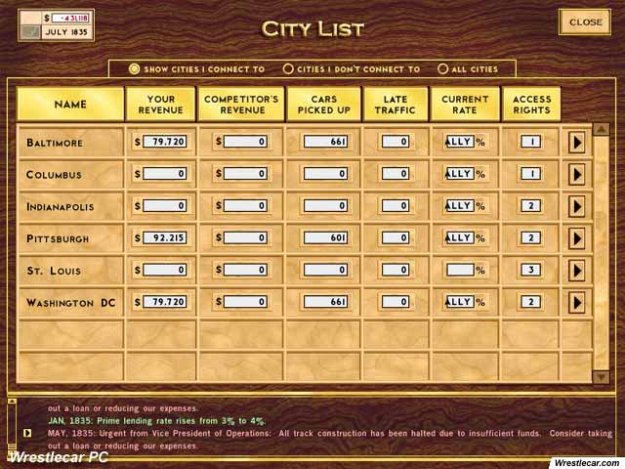 Before I even begin, let me say, if you are looking to engineer a train around a rolling hillside and marvel with all of the detail and realism surrounding you, then read no further as this game is not for you. If you are into developing and managing a complex railroad system, then this game is right on target.

Rails Across America will present several different gameplay options. The first of these will allow a player to start with a preset amount of money and select a hometown. Players will then build a network of railways and attempt to beat the computer opponents in expansion and managing funds, all while keeping your popularity above average. Another option to begin play is through one of the scenarios. Players are given a select timeframe in which to complete certain objectives. In one of the scenarios in the playable we received, fifteen years were given to build a railroad network from Baltimore to the West Coast of North America. Other scenarios that will be shipped with Rails Across America focus around other objectives, some of these including rebuilding rail systems after long and tedious war, or a race to open an area by being the first to build a railway to that location. Rails Across America will feature scenarios beginning from the early 1800's, all the way to the very late 1900's, so there is a lot of selection to choose from. 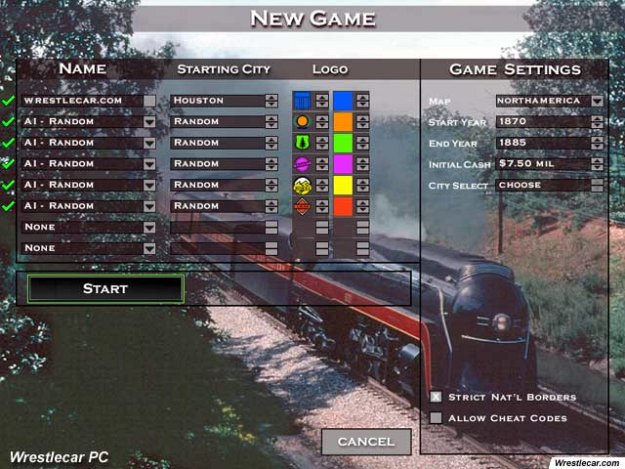 Multiplayer will be included as well, with the GameSpy connection matchmaking software integrated within the game shell. Players will have the option to join an online game and compete against other humans in a war to develop the most advanced and largest overall company.

A full-scale map of North America with all the major cities and many smaller cities is the foundation of the game. Players pick a home city and build railways from city to city. In the playable we recieved, it was only possible to build a railway to a town in which your home city or which your home city is connected to. The size of the city will greatly affect the amount of money and traffic your railway will generate. Higher traffic railways will require duel tracks, with most lines accepting up to four tracks. Other upgrades can be assigned to the tracks, such as railway signals and such. Engines must ben manually assigned to each track, and determining which type of engine is a major challenge. Upgrades will increase the productivity and popularity of the railway.

Running short on cash? Take a loan. Rails Across America is all about money-management. It is expected that players will take a loan upon the start to expand the rail system, but as the game progresses, players must learn to manage funds and only spend when necessary. Building a small railway between two towns can easily cost millions and millions of dollars, and money must be earned the old fashoned way, it doesn't grow on trees. 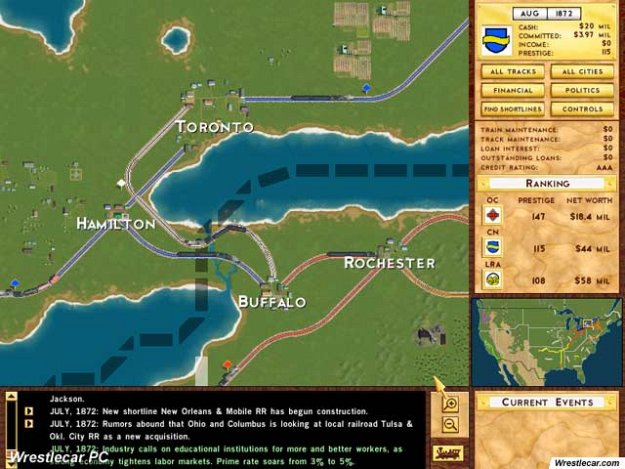 If graphics are what you are looking for, then Rails Across America is not really for you. The graphics in Rails Across America, from what we have seen thus far, are lacking. Trains all look the same, as do tracks. In our version. when an upgrade was applied to a track such as a second railroad, the original track does not physically change at all, but rather stays the same. We are not sure if this will be changed in the final version. Fortunately, for a game of this genre and type, graphics are not all that important.

In the playable we received, game play was rather enjoyable and addicting. Track construction is very easy for younger players, while the strategy and money-management is more suitable for more mature individuals. Assigning trains to tracks can become confusing at times, and making the right selection between the multiple models can be a challenge. One train should be assigned for both freight and passenger transits. Occasionally, cards will appear on the right hand corner of the screen, and I was informed that these were known as "Influence cards." These cards are used to influence your railway, or can be used to influence opposing railways. For example, a "terrorists" card can be used to do damage on an enemies railway system, but if they have influence cards, they can block the action. These cards can also be played on cities, increasing or reducing railway access to the city. These will be more predominantly used in multiplayer gaming.

The interface on Rails Across America is one of the most beautiful I have ever seen. In the background are very rare and excellent photographs of older trains, with the menus clear and concise. The in game menus are just as nice, with easy navigation, even with the massive number of options.