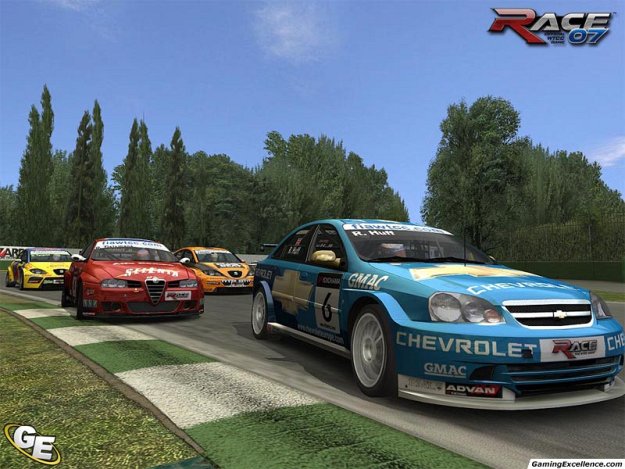 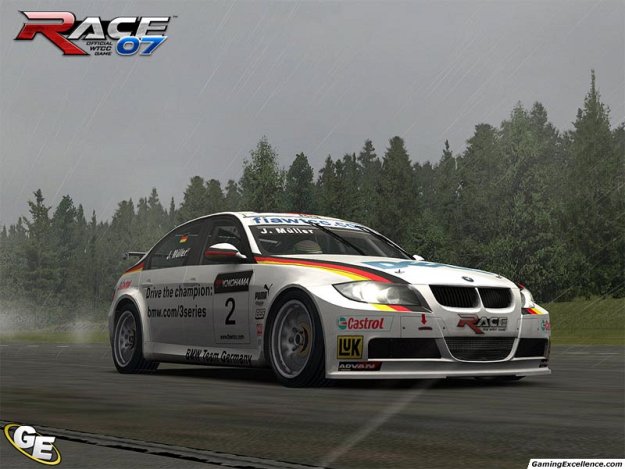 When I received Race 07, I jumped into a race immediately, figuring I'd pick up things as I went along. I mean, heck, I don't remember the last time I had to read an instruction booklet. I'd do fine. And the first race began, and I went zipping past the drivers. "Ha!" I yelled at Persiani; "Too slow!" I cried at Merendino. "Why are you slowing down?" I loudly questioned Mocci. "Oh no!" I cried as I took a third-gear turn in fifth. "Arrrgh!" I hollered as I skidded through the gravel and grass before colliding with a barrier.

So, the brake is a little handy device I decided I should learn to use. An arcade driving game this is not.

Race 07 is a racing game based in the WTCC (World Touring Car Championship). To be short, it is a no-frills racing simulator with a lot of control and tweaking but not a lot of variety. You can race with every type of touring car under the sun (not to mention other classes of cars like open-top Formula 3000 cars that'll have you zipping down the roads). But really, that's all you need in a racing simulation such as this.

And make no mistake, this is definitely a racing simulation, and with that comes one heck of a difficulty. Those who are new to the genre have a lot of practice to do. Myself, I've become a little rusty, leading to the aforementioned scenario. Games like this aren't about going as fast as you can, they're more about taking a strategic approach to each lap, balancing speed with control. So, while you might feel like going as fast as you can down the short straightway, you have to remember to slow down quickly before you hit the hairpin that comes up at the end of it.

The game does provide a wide variety of options to aid you in the game that, while making things easy, will take away from the experience of the hardcore driving aficionados. There're also a number of other options available to you that affect your performance in a race: for example, you can adjust the effect that damage has on your vehicle, and therefore how important safe driving becomes. You can also fine-tune the difficulty of your opponents, a useful ability as the AI has a tendency to be quite good.

The AI in Race 07 creates a much better experience than I've seen in racing games. While at a glance the drivers seem to be simply driving in a single line without any change, any time actually spent in the line will show the dynamic choices of the AI drivers as they weave in between each other, jockey for higher positions, and 'kissing' each other with their cars, sometimes sending them spinning off the road. They drive well, too, so making progress on the car in front of you means concentrating on every turn, lest you lose all your progress and get overtaken.

Most likely, the largest complaint many people will have with this game is the visual engine. The graphics look pretty dated, as this engine has actually been in use for a few years at least. The game isn't hideous by any means, although some of the highest settings will affect gameplay for certain computers (which is odd because the detail just isn't up to snuff). The game just looks bland, for lack of a better word. And if you're going to be staring at the same track for over ten laps, you're going to want it to look a little better than 'below average'. The game just simply fails to reach the same levels of graphical ability as other racing games on the market.

Race 07 certainly does appeal to the enthusiasts of the serious racing genre, but does a lot to make the game playable by those who aren't quite familiar with the proper procedure to take a turn without spinning wildly out of control. There's a palpable feeling of authenticity from the title, something that will definitely appeal to anyone familiar with the world of touring championships. The dated graphics might be a problem for some, but since the graphics aren't really a focus of the series, it's simply not a huge hit against the game. In the end, if you really want to play an authentic racing simulation, with such a scarce selection on the PC nowadays this is likely your best bet.