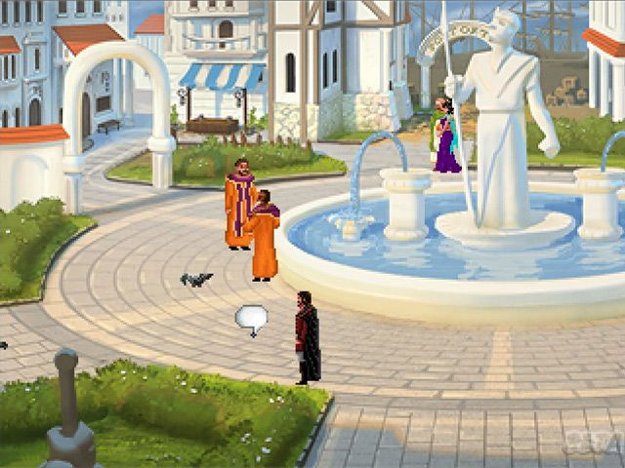 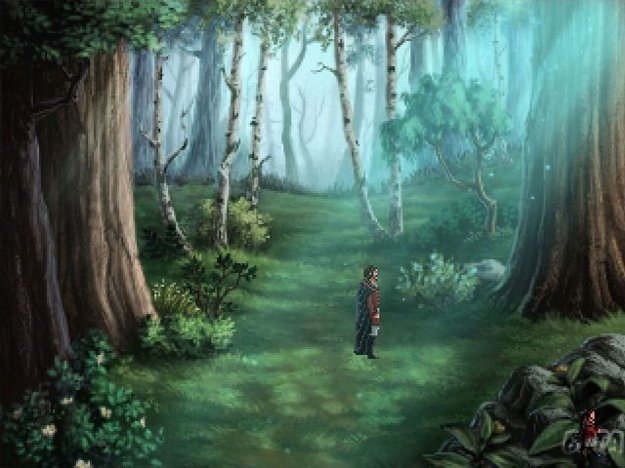 Quest for Infamy is a throwback, callback, hey don'tcha remember when kinda game, that brings back all sorts of ooey gooey feelings of nostalgia for us old timey gamers who remember when games were 2D and overly complex.  It features Roehm, an antihero who literally starts off the game with his pants down around his ankles and who narrowly escapes, only to end up in even more trouble as he gets dragged into an even more dangerous situation. Sadly for him, he wants absolutely nothing to do with any of it. If left to his own devices, he'd continue drinking, having fun and living life to the fullest -- somewhere else entirely and very far away from the bounty now on his head.

From the beginning, I was struck by how beautiful Quest for Infamy looked.  Many of the backgrounds are actually quite lovely for an older styled game and obviously had a lot of attention put into their design. Of course, there are sections where it's nothing but screen after screen of  'yet' another forest. But when you actually pay attention to the detail put into many of the screens, what could have been just a simple forest scene is now a gorgeous landscape or an ethereal getaway.  Not that your character is particularly interested in those sort of hoitey toitey things, but seeing the attention to detail is nice. 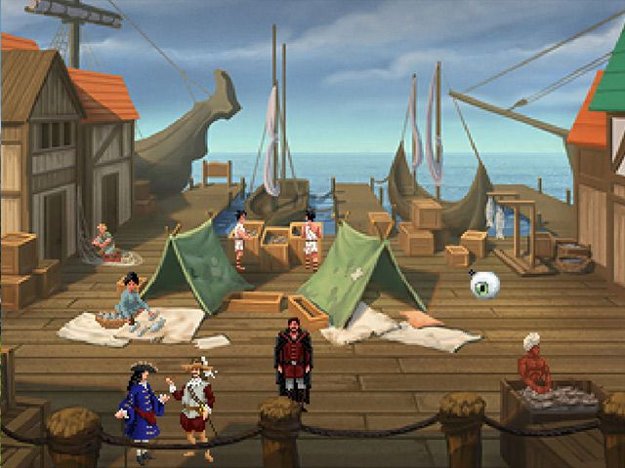 The character models are actually very well done throughout the game as well whenever your character actually starts having a conversation with one of them.  Instead of just talking to a sprite, an actual drawn picture of the person pops up on the screen so you can get a better idea of the person that you're talking to.  Unfortunately, for most of the female characters of the game, that means that you're getting an unnecessary close up of lots and lots of boobs, along with some choice words from our main character.

Now, one of the main selling points of this game is the humor. It wouldn't be half as entertaining or bearable without some of the quips that Roehm spouts over the course of the game.   Listening to him can be quite amusing.  However, a throwback didn't quite need the complete throwback to the old days of half naked women who solely existed to be objects of lust and desire for the main character.  I understand that he's a rogue, a rakehell and that's part of his shtick.  But he can make some of his clever jokes and allusions to wanting to sleep with them, once or twice and then let the joke lie. After that, they're not needed anymore. We don't need to be reminded every time he sees them. And we certainly don't need busty female characters wearing leather straps for shirts in order to get the point across that he's attracted to them. 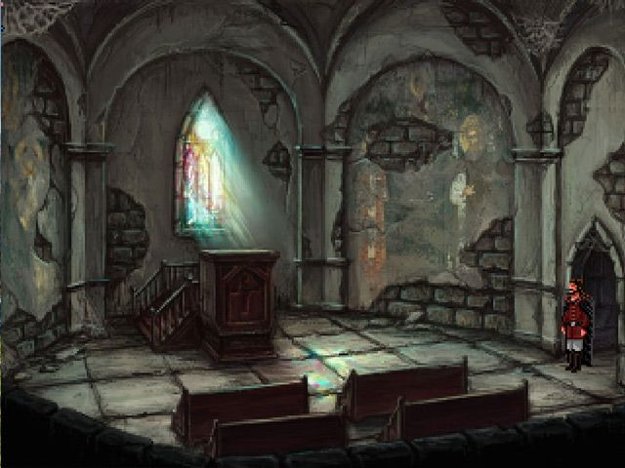 Other than Roehm constantly oogling the lady flesh, his character gets to shine in a fairly interesting plot line. You have to feel bad for the poor guy. He's constantly getting dragged around and forced to help people out in an ever increasingly complicated plot that has nothing to do with him or his lifestyle of choice.  And it was a pretty decent plot line, even though it was hampered a bit by the puzzles that populated it.  Now, I'm from the old days so I'm perfectly familiar with the old style puzzles that just don't make any sense.  But this is a newer day and age and a homage to classic games doesn't necessarily have to copy every teeth grinding aspect of those games.  The puzzles alternated between being very easy or annoyingly difficult.  They either involved me finding a solution that was practically right in front of my face or me trolling the entire game world until I came across one item, person, conversation or place on a random screen that made it possible for me to complete what I needed to with very little clue or hint as to what to do. Yay for nostalgia?

This was complicated by the absolutely horrible navigation system in the game and the clunky controls.  The game used a pretty classic control sequence where you could use the keyboard to switch between commands such as 'T' for Talk or 'W' for Walk.  You can also scroll between the controls with the mouse wheel or move the cursor to the top of the windowed screen to select which option you want to use.  This sounds like you have a lot of choices, however It becomes counterproductive when it get nitpicky on the controls you use for interacting with the world at large.  For instance, I don't believe you actually interact with any of the characters by using the hand control, yet every time you want to talk to them, you have to switch over to the talk icon.  A more intuitive control scheme that switched over to the talk icon unless an item was in your hand would have been appreciated, considering that this is a game that was made in 2014 and not 1994. And whenever I wanted to go through a door, I had to click on the hand icon and couldn't really just walk up to the door. The game could have been smart enough to realize what I was trying to accomplish, yet it really wasn't and it made interacting with it more cumbersome and tedious than it really needed to be. 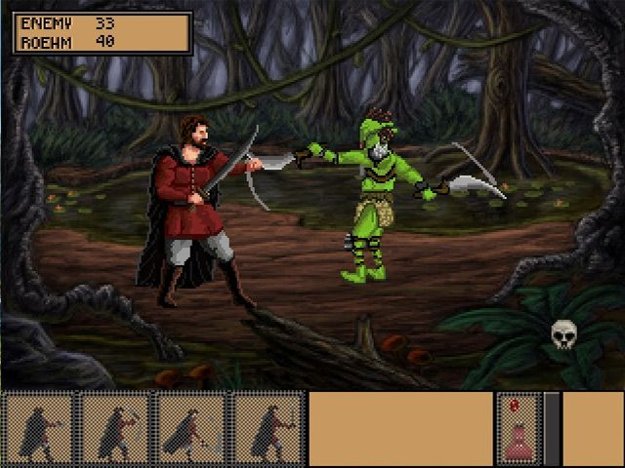 In addition, moving around the screens could be a pure nightmare.  Each of the the little icons that you use to interact with actually had a little blue dot that indicated what you were trying to interact with.  So the hand icon, for example, actually had a little blue dot on one of the fingers that you put over the object that you were trying to interact with.  When you're walking around, you put the little blue dot on the area of the screen that you're trying to walk to. Sometimes when trying to walk off screen, I had hell trying to find the exact spot to click on to get my character to move to the next area.  And I can't count the number of times I actually clicked away from the window and out of the game because it was windowed and there was no option to change it.  It drove me up the wall.  That's without even taking into consideration the fact that in the grand spirit of adventure games, it was very difficult to tell where you could actually move to at times and some of the areas of the game were difficult to find simply because I couldn't immediately tell that I could walk off the screen in a particular direction.

Now when I could move around and when I did know where I was going, the animation was pretty smooth and well done.  The sprites moved well and I didn't see any glitches in the movements or graphics.  And again, some of the backgrounds and settings were ethereal in quality; it was like setting foot in a fairytale. The sound quality for the game was very nice and most of the voice acting was not only convincing but was very well done, which in a game which focuses so heavily on story is pretty crucial.  However, for the few who were bad, they were very very bad and it stood out in such a bad way that it was a huge distraction whenever their characters were on the screen.  It was bad enough to take me out of the game setting and to wonder exactly which family members asked to be in the game.

In addition to the uneven voice acting, the voice cycling through the cutscenes actually annoyed me to no end.  When I first started playing the game, the characters talked back and forth to each other without any interaction on my part. After I'd gotten past a certain point in the game, I suddenly had to start clicking through each part of the conversation in order to advance what was being said. I was actually confused and thought that I had glitched the game due to constantly clicking off the screen from trying to navigate. I shut down the game and restart, then when that didn't fix it, I actually restarted my computer to see if that would fix the problem. When it didn't stop, I assumed that the developers had programmed the voice cycling in a really weird way for the game's opener.  When I got to the first actual 'cinematic' cutscence between the bad guys and I had to click through to cycle the conversation, I actually got angry.

This continued through the rest of the game.  Sometimes the characters would talk and I'd have to click the mouse in order to make the conversation continue.  But every so often, The conversation would move forward of its own accord and I didn't have to do anything to make it.  There was only one part of the game where I actually needed to know what the character said and it was useful for the conversation to stay around. And even then, it was only useful because I had the text boxes turned on.  If I'd had the boxes turned off, it wouldn't have been as useful. The same effect could have been accomplished with a text log for conversations.  I was incredibly displeased with how uneven the programming was and it was very distracting and agitating to never know from one conversation to the next if I was going to accidently skip past a portion of the conversation by clicking prematurely because that was the one conversation that was going to play on its own.

Combat played a role in this game as well, as Roehm comes across multiple random enemies and several set fights over the course of the game. He has to use his fighting skills, wits or magic skills, depending upon the class that you choose for him in the beginning of the game.  Once combat starts, you have a few moments to click on one of the buttons on the bottom of the screen to determine what action you want to take, be it spell, healing potion or attack.  Generally speaking, the combat in the game was actually very simple and easy.  It wasn't very challenging or difficult and it didn't really add much to the game as a whole.  As a matter of fact, it felt more like a waste of time than anything else. I never really felt challenged. You're able to use your health potions fairly indiscriminately and most of the enemies are pushovers, even the bosses.  You randomly click on the buttons, use a potion when your health is low and voila. Enemy dead.

Let's not make any mistakes here; Quest for Infamy is a very entertaining game.  It's a beautifully constructed homage to older adventure games and it's obvious that the developers put a lot of effort into making a recreation of some of the games that they enjoyed growing up. What's also obvious, however, is that they stuck a little too close to some of the old formulas. A little bit more modernization and allowances for the fact that this game is being made twenty years into the future and Quest for Infamy could have been an amazing game.  Given that the ending makes it clear that a sequel seems to be in the works, I'm hoping that a Quest for Infamy 2 makes some tweaks and changes that allow for some more intuitive play that isn't quite as frustrating and that cuts down on the annoyances that distract from gameplay.