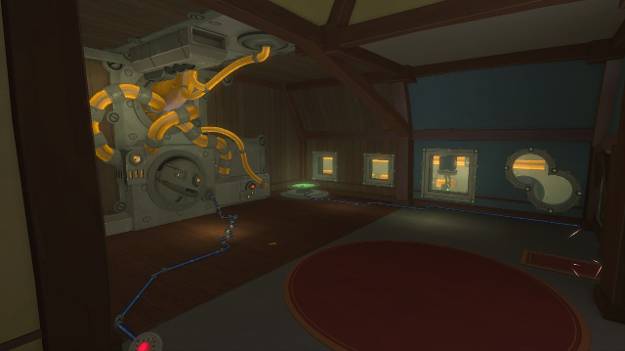 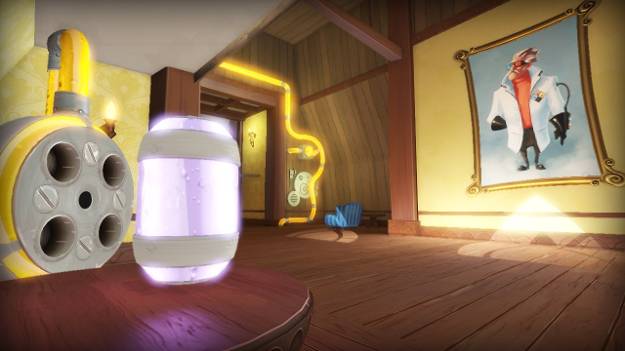 Personally speaking my favorite part of E3 is the games that you just don't see coming. Whether they're small titles that were only announced a short time ago or they're brand new games being announced this is what I generally look forward to the most. So stepping into the Quantum Conundrum theater at the Square-Enix booth was a really exciting thing for me and it has more than paid off as this is one of my favorite games at E3 2012.

When the game starts up it has a fairly familiar look to it to anyone familiar with Portal. It's clear that the game is inspired by Valve's smash hit but Airtight Games aren't going to settle just for imitating, they're aiming to create their own brain bending puzzler although hopefully without all the teeth grinding memes spewing out for the next few years. 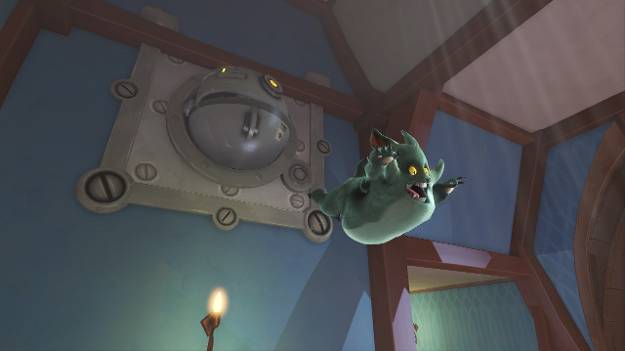 In Quantum Conundrum you control a young boy of indeterminate age (somewhere between 9 and 12 years old) who is dropped off at his uncle's house. His uncle is an eccentric scientist named Fitz Quadrangle, voiced by John Delancy, Q of Star Trek: The Next Generation fame, who has apparently gone missing. It seems likely that one of his experiments must have gone awry and only by using his inventions can we find him.

To this end the boy picks up the IDS, an interdimensional shifting device. Using this he can shift dimensions to explore his uncle's strange home and hopefully find him. By using the IDS and giant batteries you find, filled with "Science Juice" at that, it's possible to actively shift dimensions. Four of these dimensions was shown off during the developer presentation although only three were available in the gameplay demo:

Since neither you, nor several particular objects in the environment, swap dimensions you'll always have a constant gameplay experience to balance out the tricky parts to the various dimensions you'll mess with. So you'll never have to worry about the doors, buttons or switches not working as you'd expect. But since everything else in the game world does change attributes you have a wide variety of ways to handle each puzzle.

Quantum Conundrum grabbed my attention more than any other game at E3 this year due to my adoration of puzzle games. It released on Steam June 21st and will be coming to XBLA and PSN later this summer. Don't miss out on what's certain to be one of the top titles this year.