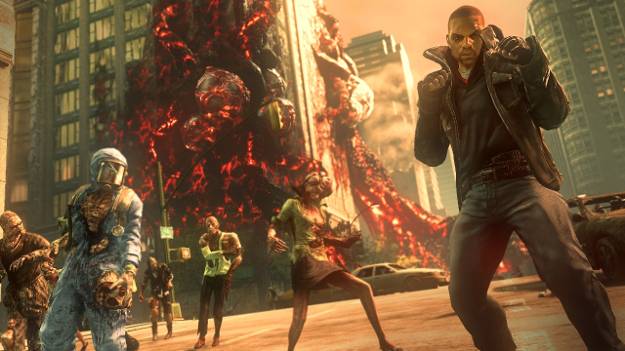 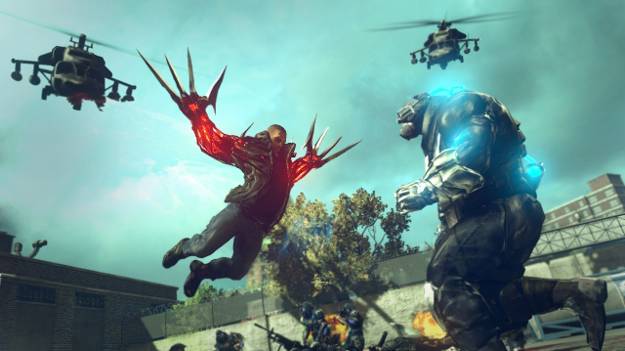 Sitting in a comfortable and quiet room in Activision's booth, I checked out a pre-alpha demonstration of Prototype 2. No longer playing Alex Mercer, you are now James Heller, a man who lost his family to the protagonist from the first game and is out for revenge. This means infecting himself with the same (or slightly modified version, at least) virus that Mercer is part of.

The entire game takes place in a location called New York Zero, three different islands that are in quarantine and completely controlled by the military (or completely overrun by the infection) after the events of the first game. We're told each of these areas are completely different in tone, both visually and audibly, and will give different types of challenges to the player.

There are a number of new abilities available to Heller that Mercer did not have. The first, the bio-bomb, allows him to turn someone into, well, a bomb of sorts. Sneak up to someone, inject them with this power, and they'll first distract everyone in sight before completely killing them with an involuntary tentacle whiplash attack. Bloody stuff. Another new weapon we got to take a look at was that of the 'tendrils'. At first, these look similar to an attack from the first game, but are not: essentially, you tie your target to other objects with these tendrils, eventually ripping them apart in different directions from the sheer force in every direction.

Let's not forget 'weaponization', either. Ever wanted to pull a tank gun from its vehicle and use it like a personal howitzer? Now you can.

The main source of missions in the game, aside from any plot developments, will be something called BlackNet, a sort of intranet for Blackwatch, the military force behind the hunt for Mercer and Heller. BlackNet will allow Heller to find operations that he can disrupt or take control of for his own purposes, or find important people that will allow him to learn more about what he has become and who he's hunting. These can also open sub-missions, extensions of your current mission that can get you even more experience and plot.

We were shown a lair: these are basically super-infected underground treasure chests, filled with strong enemies, some simple objectives, and things like weapon upgrades. These upgrades allow you to raise the strength of each of your weapons, making them even more deadlier (and having them look the part, too). We were able to see a new, larger version of the hunter called a Juggernaut, as well as the improved combat system that has better enemy tells and allows you to pull off quick dodges like quick-time events.

From here, we saw a quick gameplay demo that showed off a new enemy, called "Tiny". It was as tall as a building, and about as wide as one too. The demoer basically ran from the boss while showing it off, saying that there were a number of super-sized targets in the game.

It's clear that if you want to scratch that power-filled itch, being able to throw cars like candy and devour innocent civilians, also like candy, then this game will have you covered. Prototype 2 comes out in 2012 for the PlayStation 3, Xbox 360, and PC.