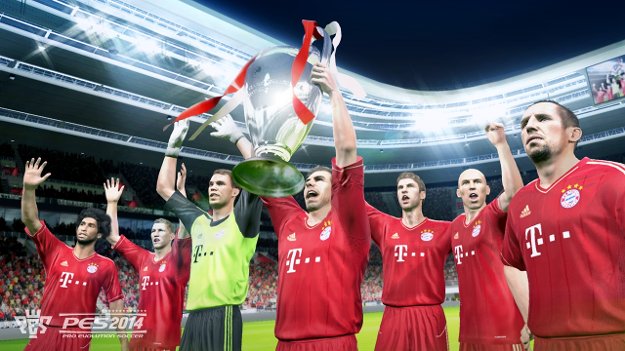 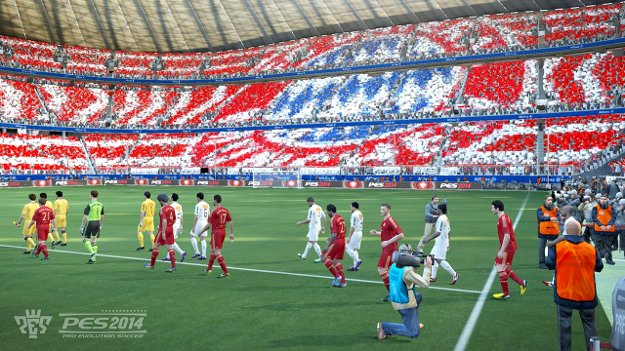 First and foremost I’m going to probably say soccer about a million times here. Someone is going to rage at this because it’s football, not soccer. But considering that PES 2014 has already happily spent several weeks kicking my teeth in at every opportunity due to my lack of experience with the sport I feel like I’ve earned my dues to call it whatever the heck I like.

The very first thing about PES 2014 that jumps right out at the gamer is the quality of the graphics. Konami has clearly put a lot of effort into making the FOX Engine work like a beast for this game. While said engine might be notable for powering the Metal Gear Solid series it acquits itself remarkably well with this title. The stadiums are huge and full of life, with a crowd that responds to the ebb and flow of the game in front of them. Each of the football players are rendered in immense detail to the point where even my untrained eye started to learn people’s names and faces… all the better to learn who I was cursing at for breaking through my defense.

Even better is the fact that the game, generally, runs smooth as butter. You’ll watch your carefully planned assault on the goal unfold with a graphical fidelity that’s almost approaching that of watching the actual sport. It’s pretty amazing to actually see in motion and screenshots do it a disservice. Unfortunately the games engine seems to be let down by the hardware that it’s running on. On both the Xbox and the PlayStation 3 the game stutters and hiccups whenever watching a replay or whenever trying to process a wide shot of the field. I haven’t had a chance to try the PC version yet but I wonder if that version might be the best version if you’ve got the hardware to run this beast. It might even help mitigate the often ridiculously long load times.

PES 2014 is not exactly what I expected from a soccer game. It’s a fairly slow paced, methodical experience as opposed to the more bombastic gameplay that I initially expected. Having one man just blitz across the green in an effort to score will almost never work out; the A.I. will put a stop to that if you try it. You’ll have to watch for your openings, pass it strategically and get people into position to score. A smart player can even pull some shenanigans to mess with the A.I. or other players such as setting up people so that when the other team “accidentally” gets the ball you swipe it away aggressively, creating an opening as the defense lessens for a moment.

However all the great gameplay ideas wouldn’t amount to much of anything if the actual gameplay didn’t live up to that potential. PES has possibly one of the biggest learning curves I’ve ever encountered in a sports game but it’s an immensely rewarding one so long as you can learn the various mechanics at play here.

First and foremost is the actual presence of the players on the pitch. In most sports games you used to just pass through each other but in more modern games you simply just don’t occupy the same space. But here each player has a physical presence that takes severe getting used to. It’s possible to steal the ball away from someone else by simply bumping into them in the right way. To make up for this you can use the right thumbstick to try holding off opponents when on the defense or to try a quick shove when on offense.

Next up is passing. Since the ball itself has weight and presence you're going to have to be more careful about how you move with the ball and keeping it away from other people. Whereas you can get away with just bouncing the ball from person to person like a pinball in other soccer games here you’ll have to be mindful of the ball itself. Passing itself is actually quite responsive but the movement of said ball is closer to real life than a video game and it might take some adjustment for the avid sports gamer. Honestly watching the players bump, kick and flip the ball around in an effort to keep it away from the opponent, all done with simple controller movements is pretty damn amazing both graphically and technically. 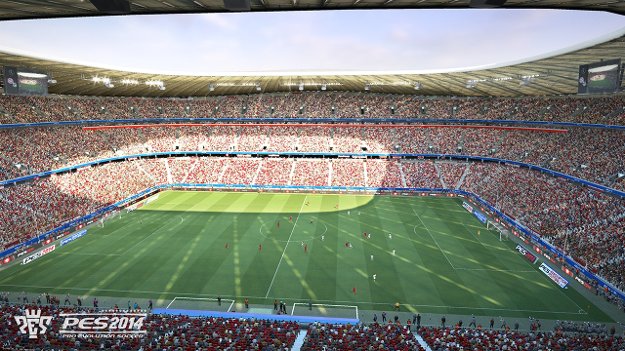 Then from here you’ve got a number of beginner and advanced systems that are in place for gamers of all stripes. If you’re not manually using all of the options the game gives you for ball control you’ll still perform keep-away attempts automatically. But if you’re something of a control freak you can actually use the tutorials to master the advanced shooting and passing options but I honestly had a hell of a time deciphering these, likely up to my lack of knowledge of the sport and soccer games in general. The tutorials themselves are quite thorough and you’ll have plenty of chances to practice so taking your time to learn these mechanics will be rewarding so long as you take the time required.

Even for someone who isn’t a huge fan of sports games (or soccer games in particular) PES 2014 is still a great game. What you have here is a quality gaming experience with high production values and damn good gameplay design. When the worst thing you can say about a game is that it sometimes feels a bit slow paced, which is clearly what the developers were intending, that’s a damn sight better than most games can hope for. Once I can clear up some time to learn how to perform the advanced maneuvers a bit more reliably I’ll be more than happy to be online getting smacked around by other gamers, especially if the developers deliver their promised 11 vs. 11 gameplay.