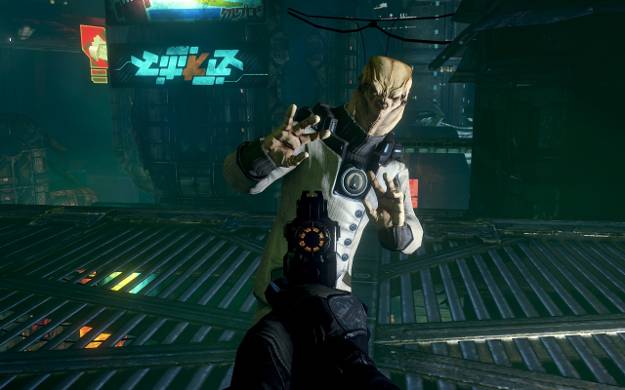 I wasn't sure what to expect when I walked into the booth for Prey 2. The first game, a linear corridor shooter with some cool portal mechanics, but otherwise a standard shooter. Prey 2 looks to change, well, pretty much everything about the first title, adding in an open world to explore, a mission-based story structure, and first-person climbing mechanics that I've never seen before.

We started simple – the first level of the game. In the first Prey title, at one point you see a plane get abducted by the aliens into the sphere. Prey 2 is the story of a marshall onboard that flight, Killian. The game begins as you struggle from the wreckage, attempt to fight off some unknown aliens, and then ultimately with your capture. That's when the game really begins.

The second part of the demo took place about a quarter of the way through the game. Killian is in an alien city, on the unknown planet of Exodus, working as a bounty hunter, but with no memory of how he ended up there or what he has been doing. This city serves as the open world available to the player, and as a bounty hunter, Killian has no shortage of work.

First, the movement and combat in the game have been greatly revamped. A first-person cover system, similar to the one in Killzone 2 and 3, has been added, Also, as you roam the city, you'll find that your weapon is holstered by default, which opens up a new method of dealing with the residents of Exodus, namely the ability to threaten them with a weapon to their face. This can do you some good, such as skirting payment for information, but has the potential of blowing up in your face.

The movement system was one of the things that impressed me the most about the demo. Killian has access to a wide range of movements, whether it's sliding under obstacles or vaulting over roadblocks, all while being able to shoot in the process. In addition to this, there are climbing mechanics in the game, the type that typically only ever appear in third-person titles like Uncharted or Tomb Raider. From what we saw, they work really well, allowing you to climb up and around ledges, using them for cover. In the not-so-flat alien city, this is a necessity, and combining this with the fluid movement mechanics make for some pretty excellent chase sequences.

Chase sequences are part and parcel with being a bounty hunter. These begin as you scan your environment, allowing you to find people who have bounties on their heads. Though some of these are based off of missions you can accept from the Bounty Wire, sometimes you will just find 'ambient bounties', random bounties for you to capture. Once you've found your target, you can try to threaten them into submission or kill them outright before they know what's coming. When you absolutely have to capture them alive, however, and when they run, you'll find yourself leaping and sliding, climbing and diving with the game's Agile Combat system. It's really impressive to watch how fluid the movement was.

Being a bounty hunter means having a reputation to uphold, and Killian is not exempt. Whether you act professionally or bloodthirsty, taking collateral damage in the process of completing a mission or performing a precise hit will affect your rep. In addition, sometimes your targets may try to entice you to let them go with a better deal than your client, which will also affect your reputation.

With a number of customizable weapons thrown into the mix, an open world, a fluid movement and combat system, and a whole lot of bounties to take and hunt down, Prey 2 looks to change and improve everything about its predecessor. Look for it sometime next year for the Playstation 3, Xbox 360, and PC.