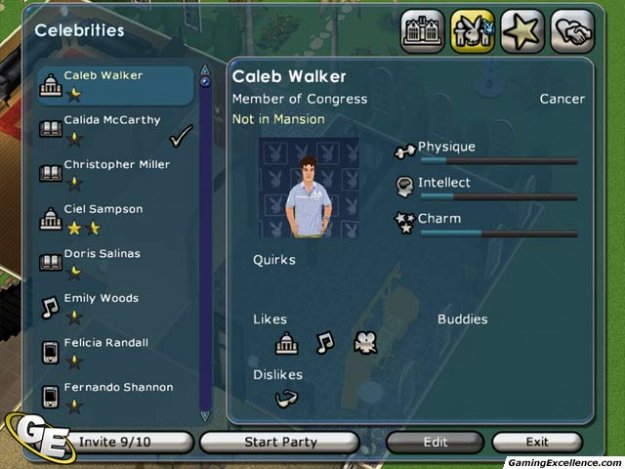 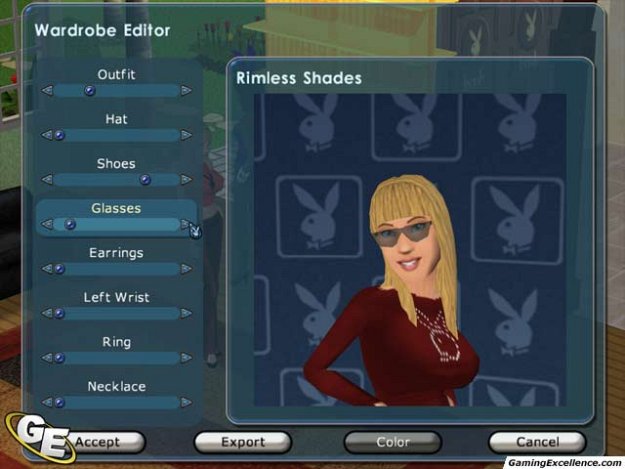 If the criteria for success is fulfilling the promise of what the box contains, ARUSH Entertainment's Hugh Hefner simulator Playboy: The Mansion is a decent game. There's a slick package, two CD's to install and a short manual to read while the installation is underway.

ARUSH's website makes several claims. First, a 3D environment that is fully zoomable. True, the camera zooms in and out but only while on Hugh, the only character you control in the game. The view isn't too majestic either; the mansion is very small and poorly furnished. And the highlight of the graphics are the walls (not doors) turning transparent when the player looks through them, and objects usually highlighting orange when clicked. They're not anything to get worked up about.

Second, there are multiple Playboy estate areas are in the game. Yup they're all there, the downstairs, the upstairs, the pool, the infamous grotto, but there's an annoying load time between each area, so why even bother leave the bedroom?

Third, and here I'll quote directly from the company's website, "Hundreds of 'celebrities,'" are included in the game for you to interact with. The quotes around the word celebrities are definitely needed; these are not A-list Hollywood types we're talking about here unless you're big fans of Uncle Kracker and Boris McEngroe.

One bright spot is Felix da Housecat an included celebrity who also coincidently mixed the music for the game. Unfortunately the music is mostly lackluster. There is a track selection option but then you'd actually have to listen to most of it to decide which tracks to turn off.

Lastly there's the two different modes of play, free play and campaign mode. Campaign mode begins with a video montage of the development of Playboy magazine, from its humble beginnings in the 1960's to the international trademark that it is today. It's a really good video, it should be the intro to some Playboy documentary, and so I was really excited to step in Hugh Hefner's robe and build my magazine empire. That's what the game turned out to be, wandering around a massive property trying to cobble together a magazine. You've got to manage your staff, arrange for cover shots, centerfolds, pictorials, get articles written, wrangle interviews and essays out of the people you invite to the mansion, and at the end of the day get that magazine, whether it's any good or not, to the publisher.

So it's a magazine editor simulator basically. You've got to arrange everything, pay the bills, get all the people in all the right places, consult what the market is interested in, and decide what content to put in the next Playboy issue. Sound exciting? Yes it is at first, but after you publish five or six issues, you should have probably figured out the pattern that will keep you in martinis and Playboy Bunnies long enough to meet new people to harass into contributing to your magazine.

Campaign mode tries to keep it interesting by giving you objectives like "Have two girlfriends at the same time" and, "Get an interview with the 'celebrity' who just walked in the front door." Interesting? Not really. Fun? Not particularly.

Any objective can usually be accomplished by about two minutes of navigating a simple conversation theme menu. Options include: "Joke Around," "Question Finances," "Ask About Ex," and "Smoke Cigars." Spend some time chatting with someone and they'll do anything from write an essay for you for a $1000 fee, to take their top off.

It's here that the game earns its Mature rating. Digital breasts are a prominent feature of this game. One of the 'perks' of being the editor is that you get to take all the pictures in the Playmate shoots. Choose a location, a choice of seven outfits (not including topless), and click away. It's fun once or twice, but since you have to do it twice an issue, it's old by issue two. It's the same for having Hugh make nookie with the ladies. Once you've seen them grind their virtual bodies together once, there's nothing new to see.

Freeplay mode is a challenge mode. Set a goal for yourself like selling 80,000 copies of the magazine or putting together a great sports issue and play the game until you meet your goal.

Playboy: The Mansion does try to resemble The Sims in many ways, but I feel kind of bad making that comparison. The Sims is all about the freedom of playing with a virtual dollhouse, it's completely customizable. Hugh's mansion is not. All the rooms come prebuilt and ready to use, all you can to is add some more decorations or useless objects, not that there's much space to do so.

You can also change Hugh's clothes and command his playmates to follow you around and whore themselves out to your lonely male guests. There's just not much freedom in this game to explore or experiment. To add some more depth to the game, bonus points were added in, albeit it seems a little bit superficial. These points are awarded anytime you accomplish an objective and can be traded in for "cheats" or bonus material.

The "cheats" aren't really cheats, they're just little perks like adding money to your bank or adding silicone to women's chests, or better yet, super silicone. I had great hopes for the bonus material, I was presented with a list of Playboy centerfolds who I could unlock pictures of. But wait, the loading screens mention Marilyn Monroe as the first centerfold, and interviews with Cher, where are those? All I'm left with are perfectly airbrushed pictures of women spanning 1961-2003, who are as popular as the 'celebrities' in the game. On the positive side though, some of the interviews that can be unlocked are amusing, featuring Snoop Dog and Wayne Gretzky.

Over all the game was a disappointment. No skill or thought is required beyond the ability to read and click the mouse. One would think living the life of Hugh Hefner would be fun and exciting, but the glitz and glamor soon wears off. You realize that this isn't a party life you're looking at, but an image being produced, a magazine being sold. The game is about business, power networking, and getting as many women as possible to take their clothes off.

It's an ugly reality.