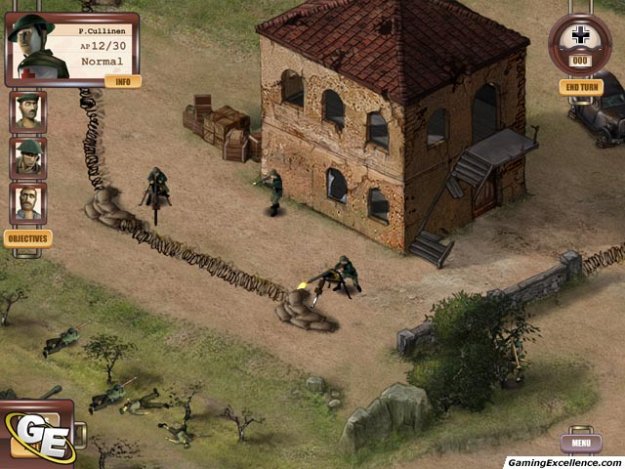 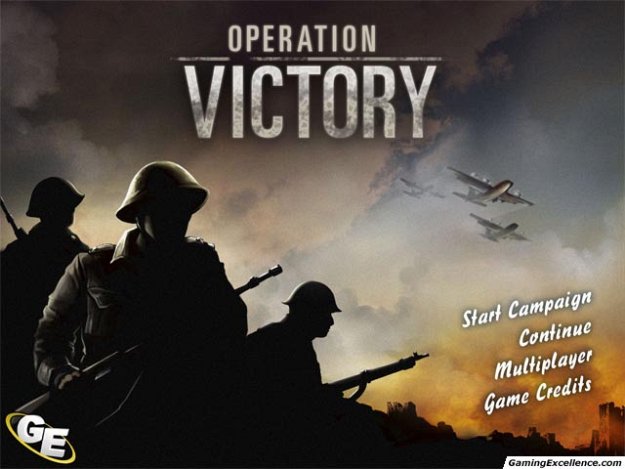 Although Canadian game developers have grown in number and attracted quite a following in the last few years due to well developed and intelligent games, few of those same big-budget companies (Alberta's BioWare, Ubisoft Montreal, divisions of EA Sports, Microids, etc) have ever put out a "truly" Canadian content title. And what better way to start then to focus on Canadian achievements around the world? War games typically illustrate an American or European role in battle. Operation Victory is different; it gives a Canadian Perspective to World War II, detailing the Canadian contribution to the missions, battles, and victories. Fortunately, it doesn't do a bad job in doing it either.

Operation Victory is a turn-based strategy title set around the events of World War II, notably the Canadian contribution to the war. Developed by a small Canadian studio known as Breakthrough New Media, in partnership with Sarbakan and funded by the Government of Canada, Operation Victory offers both an entertaining and educational experience simultaneously.

The typical turn-based strategy model is simple and similar to that of a board game. In this respect, Operation Victory isn't much more difficult. You start each mission with a squad of four soldiers, each with different strengths and items. Soldiers have action points (AP's), which can be used towards different actions, movements and item use. Soldiers can perform a variety of maneuvers, whether it's lying prone in a crater or crawling up the beach at Dieppe.

You'll have to manage and position your soldiers well, not only to avoid sniper fire but also to harness the individual skills of each team member. Some members carry medkits, while others have access to grenades, explosive charges or simply wire cutters. You'll need to use every soldier during battle and proper positioning and timing will determine the success or failure of a mission. In addition to movement, action points are used for weaponry, tossing grenades or setting explosive charges. You can provide cover fire for your troops by setting your soldiers to Overwatch and finishing their turn with action points remaining, or simply lay prone in a crater to avoid enemy fire.

Surprisingly, one of the features commonly found in turn-based strategy games is the 'fog of war' concept, a feature that that is not implemented here. Although the lack of this fog takes away from the realism behind the title, Operation Victory is difficult enough without it, so it's probably best left behind. Failing a mission is incredibly easy, sometimes even frustratingly so; if you happen to position any one of your soldiers in the line of fire or in the wrong place at the wrong time and they get killed by gunfire or mortar shells, the mission is over. Whether you're five or fifty turns in, one death and the mission ends. This really makes for extremely difficult missions, and can be very frustrating when you are deep into the final objectives of a mission and lose a single soldier and have to restart from scratch.

Graphically, Operation Victory is a mixed bag. Although the graphics are designed for a lower-resolution and only run at 640x480, the two-dimensional view-down perspective works well in this situation. Character models are basic, but more than suitable. Explosions, as well as mortar and gunfire are a nice touch as well. The low-resolution textures and environmental models actually give the title a more nostalgic feeling, putting you in the 1940's era warn-torn countries. In turn-based strategy, graphics certainly aren't the main focus and as such they really don't hinder Operation Victory at all. If anything they add to the value of the game.

One of the elements that makes Operation Victory such a playable title is the ease of use. The interface is very simplistic; unnecessary options have been condensed or removed altogether and a good background is given on each mission before you proceed into battle. The in-game interface is a simple point-and-click system and even without any experience with the genre, the first few missions act as a tutorial system with helpful pointers and guides which should bring anyone up to speed.

One of the strongest areas of focus for the development team seems to have been the soundtrack. The 1940's themed battle music is a nice touch and the voice acting is appropriate. While you'll never be blown away, it does compliment the game as a whole quite nicely. Explosions and gunfire are realistically captured and even for a turn-based strategy title the "in the heat of battle" feel is well-presented by the audio.

Operation Victory offers more than just another turn-based war game. Its focus on the Canadian contribution to the war brings out the patriotism in every one who calls Canada home, something that truly isn't recognized enough. The developers have tried to capture the true Canadian spirit in Operation Victory and have succeeded in doing so. Available as a downloadable-only title from the History Channel website, Operation Victory is recommended for any fan of the genre.