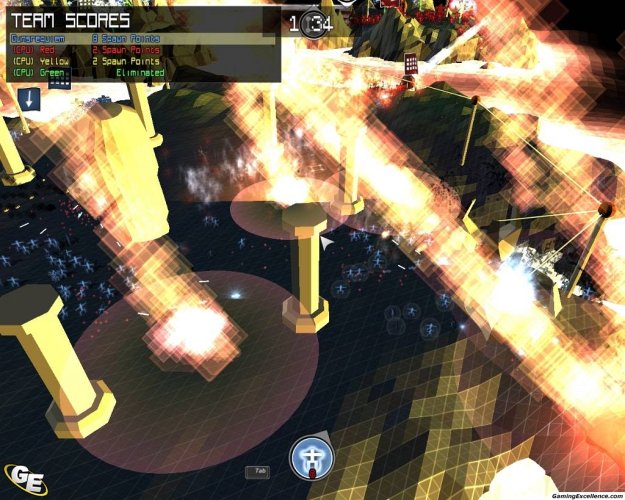 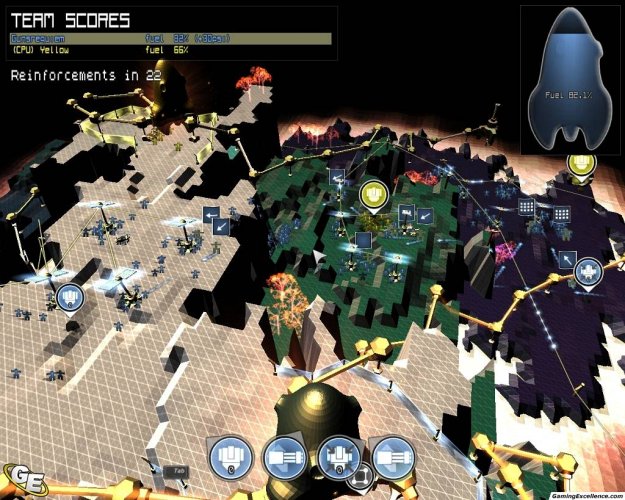 In 2005, a small Indie developer by the name of Introversion released a game called Darwinia. It was unique in its style, if not for its gameplay as well, where you had to take control of a massive computer system, home to programmed creatures called Darwinians, in order to fight back a massive virus invasion. Multiwinia takes place in that same world, but now the enemy isn't the red virus influx, the enemy is now other Darwinians. As system resources dwindle, the Darwinians turn on each other, forming tribes to conquer the digital landscape.

You take control of one of these tribes and play in multiplayer-centric Multiwinia. There's no story to speak of; just a series of modes on a variety of maps against other opponents. There are six different modes of play: in Domination, you must simply wipe out your opponents; in Capture the Statue, you and your Darwinians must capture statues that appear across the map and bring them back to your base; King of the Hill involves taking control of points scattered around the map and keeping them under your control by defeating your opponents' advances; in Assault there is a massive attacking force that tries to defeat a heavily-fortified defending force; in Blitzkreig, you're set to capture zones against your opponent; and finally in Rocket Riot, you must refuel and fill your rocket before your opponents can prepare theirs, sending it off to win the game.

Many of these modes sound familiar, and it's because they are; at least the basic mechanics are. The way that you control and use your Darwinians, however, is different from most games. Your main forces (the little green guys) spawn from the aptly named spawn points, buildings that are placed around the area. Victory revolves around capturing these, as the more Darwinians you can spawn, the more lasers and grenades you have flying through the air. You don't directly control each Darwinian, telling them who to attack, but you can tell them where to go and they'll know what to do from there, whether it's shooting the enemy or capturing a building. You can also create commanders, special Darwinians that can give orders to other Darwinians. These commanders can tell every Darwinian they come into contact with the walk to a particular point; they can also have all the nearby Darwinians form into a formation in front of them that will act as a wall of lasers to do some serious damage to any foes in front of them.

But Darwinians are not all you have to fight with. As you play, crates will drop from the sky for you to capture. Within these crates are power-ups for you to activate at your leisure, power-ups that fans of Darwinia will recognize. With these you can do things like make an air-strike on the map, drop a mobile troop-transport, or deploy a turret for your Darwinians (or your enemies, be careful) to take control of and decimate their opponents.

Though the emphasis of the game is on multiplayer gameplay, you can also play against computer-controlled AI. The preview copy I received allowed to me to play two modes (specifically, Capture the Statue and King of the Hall) against a couple computer opponents. I found the result to be a quick-paced strategy game that eschewed many classifications you could give it. There are no buildings to speak of, nor are there any resources (except for your ever-spawning Darwinians) to manage. Throwing orders to groups of Darwinians, giving commanders orders to tell other Darwinians where to go, making sure to keep an eye on where crates are falling, what positions you've captured, and so forth means a lot of quick-thinking. There's little as worrying as hearing that your opponent has procured the use of an air strike, furiously trying to scramble your Darwinians out of the way of arriving bombs.

It's definitely something I want to see more of; especially against some human opponents (the preview build did not give me this option). It's like a real-time strategy game without the managing of resources or buildings, worrying about unit management or rock-paper-scissors weapon weaknesses. Multiwinia seeks to distil the RTS genre to its most basic form, the quick pace and strategy, and bringing Darwinia's unique wireframe style to the genre makes it even more unique. When released, it looks like the peaceful wireframe plain of Darwinia is going to go through some interesting change, fast-paced change that is like little else on the market.