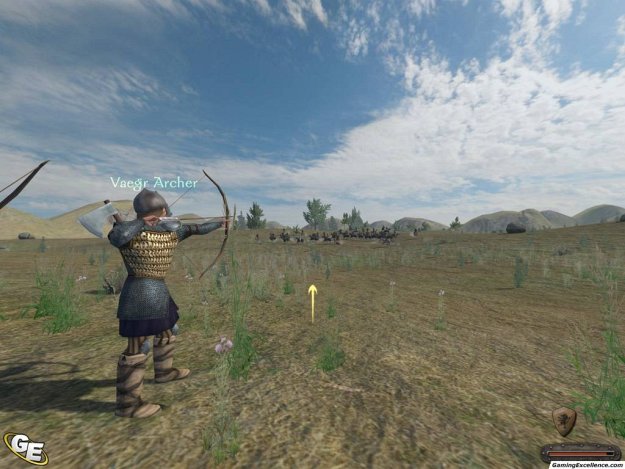 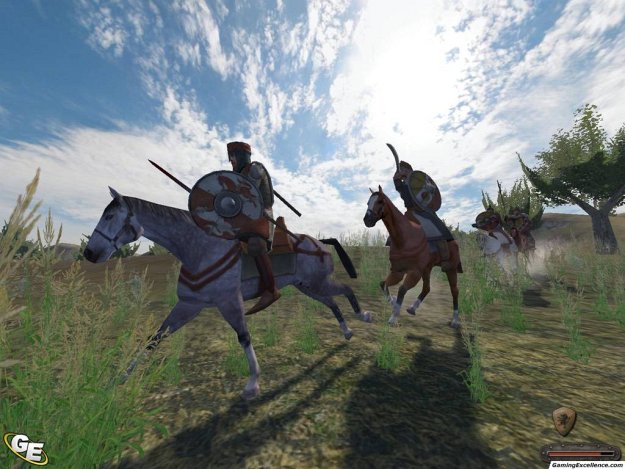 It's a little tough to characterize Mount & Blade. It's an RPG with a bit of tactical warfare thrown in, emphasis on the tactical. It's like a real-time strategy game told from the point of view of one of the commanders. An evolution of a previously free title with more gameplay pushed in the package, it's going to be something that most people haven't played before, despite what its less-than-stellar appearance may impress upon you.

There's no real story to speak of in Mount & Blade, other than the story you create for yourself. You begin by making your character's appearance and creating his past, then put some points into a wide array of attributes and skills to finalize your creation. After that, you're tossed into the medieval world of Calradia; a land of lords, kings, wars, and heroes.

Running around Calradia is fine and dandy if you want to get yourself defeated and robbed repeatedly (your main character doesn't die), but the game is not about that. That wouldn't be very fun at all. No, you'll be recruiting men to join your army before long. Whether you get these men in taverns, villages, or liberate them from captors, they'll fight by your side and help you win battles. As long as you can pay them, anyway. As you fight in battles and accrue experience, these archers, cavalry, and infantry will grow stronger along with you. A fair amount will die as well, but well, war and all.

You can upgrade them to become stronger by branching them down particular paths. One soldier might be upgraded to down a path that gets him on a horse with a poleaxe in his hands, while another can go down the ranged path instead. There's also the option to recruit heroes: unique men and women who can level up like you (as opposed to upgrading like your troops), becoming stronger with the caveat that you must equip them. Unlike your troops, heroes don't come with equipment. Filling your army with a diverse combination of unit types will win you battles.

Battles. These are the meat and potatoes of the Mount & Blade experience, and it shows. These are not your dad's five-on-five simple military excursions either. And you won't be watching any of it from some hovering balloon in the sky, either. You'll be right alongside your men, bloodstained armour and all, as you and your fifty-man army charge toward the enemy. This game manages to create a truly electric combat environment, filled with all the chaos and carnage that you'd expect from such an event. You'll charge through groups of men with your horse, leaning down to take down a few in the process with your sword; chase down archers on the outskirts of battles; take a lance to a mounted opponent, throwing his horse to the ground; the experience created is quite something. Then there're the siege battles, when you're either taking down a castle or defending against someone who wants to do the same to you.

But you're not just some grunt, you're the commander, and that means commanding. You can use some fairly simple commands to relay orders to your three groups of units (infantry, archers, and cavalry). Choose the right tactics and it can mean the difference between a crushing defeat and a victory without a single man down. The AI works well, though their skill in the combat department is questionable, since usually the majority of kills will be made by you.

Unless you're taken down; you should avoid that. Falling in combat won't necessarily mean a loss, but it will mean being forced to watch from the sidelines, hoping that your men are competent enough to win a battle. Sometimes they aren't, and you'll watch a 2:1 lead over the enemy's numbers quickly get whittled down to nothing before you're tossed in chains. It can be frustrating. There's also an issue with the combat AI when it comes to tight spaces; this is especially true with horses. More than often enough I see units charge into corners, apparently unable to navigate the complexity of the command to turn around so that they can see the blade coming for their backside.

The entire game isn't just about combat and mowing down your enemies and all that bloodthirsty carnage. The world of Calradia is a large place, filled with kingdoms that constantly battle and war and make peace, each of these filled with towns, castles, lords, and people for you to help and make allies with. There're things to do wherever you go, whether it's collecting taxes for a lord, gathering supplies for a village, fending off bandits, kidnapping a noble of an opposing nation, or simply escorting a caravan to another town, somebody always has something that needs doing. While the quests are randomly generated, they are diverse enough to keep attention and go beyond the abundance of fetch-quests prevalent in other role-playing games. Since the people you're taking quests from are usually roaming around the world in some military campaign or another, however, it can be annoying having to track them down just to tell them you've finally done what was asked (and to get your pocket filled with coin).

It's impressive how dynamic the world is. It's not emulating economic cycles or anything, but it feels anything but static. Kingdoms at war will do just that: war. You'll see army traipsing across the landscape to lay siege to a castle, pillage a town, or hunt down a commander. And you can join them, too. It's really something to be part of a five-hundred man army rolling over the landscape, watching as armies flee. Caravans will travel between cities, and you can offer to guard them (or rob them blind if you so desire). You'll pass by battles in-progress, looted villages, and areas that have changed hands between enemies. You can even become a vassal of a nation's king, earning a spot of land yourself to protect. Do so, and you'll be contacted from time to time to engage in military campaigns with the nation's troop marshal, fighting the war with the rest of your compatriots.

As for the auditory and visual aspects of the game, Mount & Blade falls short. Really short. Last-decade short. Polygon counts aren't high, and maxed-out graphics settings are not going to hurt anyone's computer. On top of that, the world suffers from a feeling of repetitiveness: there are only so many types of cities, villages, and castles that you can go through before they start repeating themselves. Places lack style.

The sounds aren't much better: while the music is pretty good, it's quite limited and the sound effects feel heavily dated. The voice work sounds great though, if only because everyone sounds like Arnold Schwarzenegger. It's a real shame, because these are the elements that most people are going to notice first, and it's probably going to be what'll turn many away from a good game.

Mount & Blade is fun to play. It's not good to look at. That's a good summary right there. The graphics could use a serious overhaul, but the mechanics are fairly sound (although I wouldn't mind a little better AI). Those who have played the free version of the game before it was picked up back in the day have a lot more content to look forward to as well, not just a rehashed freeware experience. It may be a quiet title and isn't going to be touted as the definitive PC experience anytime soon, but Mount & Blade delivers some solid gameplay and combat that makes it fun, and that's really all that matters.