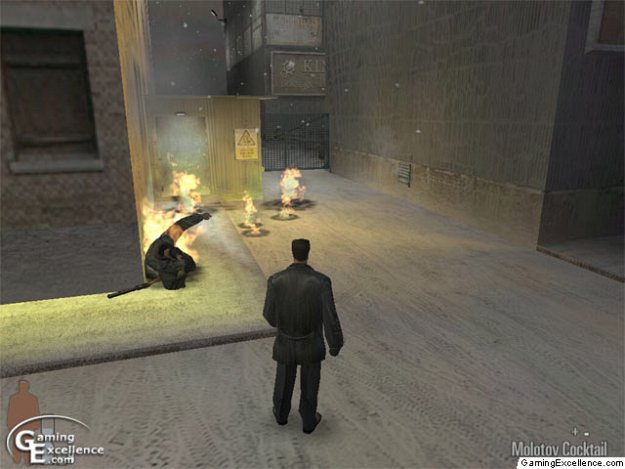 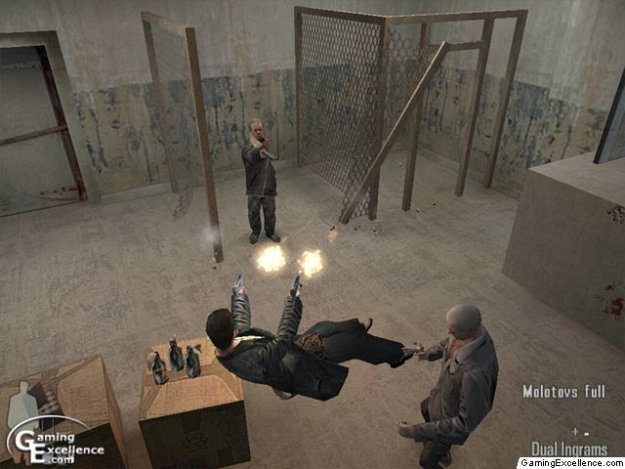 Every so often a game comes around of such magnitude, such brilliance, that it changes the PC gaming community as a whole. Developed by Remedy Games and Published by Gathering of Developers and 3DRealms, Max Payne is the most brilliant game since Half-Life, and that is a very hefty achievement. Never before has a game provoked such emotion in a character. Many games advertise to put you into the setting of a movie, but Max Payne actually accomplishes it. This game is one of the best of the best, and it is damn fun to play as well.

Several months ago, a friend of mine showed me a trailer of an upcoming title called Max Payne. The release date was unknown at this time. I have been a great fan of the Half-Life genre of games for a long time, and continue to play Counterstrike to this day. Mind you, ever since Max Payne has been dropped into my greedy little hands, there hasn't been much time for Counterstrike. Never before have I become so compelled to play a game, and complete it again and again. Although its overall storyline is short, it does an excellent job of portraying a character's personality, and placing you in the scene of a Hollywood movie. This storyline is so cunning and clever that Dimension Films have purchased the rights, and are planning on releasing a movie of Max Payne in the future. 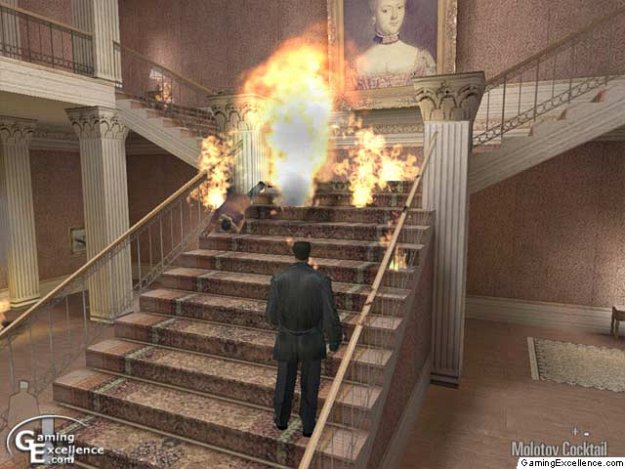 The storyline plays a crucial role in games that are strictly single player. Several years ago, Half-Life started the trend with its Black Mesa storyline. Deus Ex is another title that includes an excellent real-time storyline with on the fly decisions that will affect the outcome of the game. Although these storylines were intriguing, they were both semi-realistic. I don't want to give away much of the storyline in Max Payne, but if you are really paranoid about hearing parts of it, you may wish to skip the next paragraph.

You are Max Payne, an undercover cop in a major drug operation. You are telling a story, a story of hell-bent destruction and despicable acts of terror. Everything taken away in a New York minute. Your wife and baby daughter are brutally murdered, and you are framed for the crime. You are a wanted criminal, and are caught right in the middle of something so large, something you cannot control. You are wanted by the cops, and wanted dead by the mafia. This is a battle you cannot possibly win.

Graphics will make or break a game in the genre, and they certainly play a vital role in Max Payne. Included in Max Payne are quite possibly, the best visuals seen in an action game, ever! Unbelievable detail has been included, with superior lighting effects. Max Payne delivers a graphics package that is second to none. Everything can be destroyed; vehicles, furniture, and everything in between. The character motion and appearances are photo realistic, and Max Payne includes outstanding cinematic effects. If you cannot tell, Max Payne has done just about everything right in the graphics department, and this really helps in making it the superior game it is.

Bullet-time is something that you will often hear mentioned when people discuss Max Payne. Bullet-time is the slowing of the action, giving you time to react to your enemies. This feature is similar to what is seen in the movie, "The Matrix," and is a very popular feature. Although in you are limited to certain amounts of bullet time usage, your gauge will slowly refill itself as you defeat enemies. You must use this ability wisely, as on many occasions, Max will be forced to face a large number of enemies, and it is very difficult to defeat them without this. Bullet-time is really what makes Max Payne what it is, and is the most well used and innovative feature ever included in a game to date. 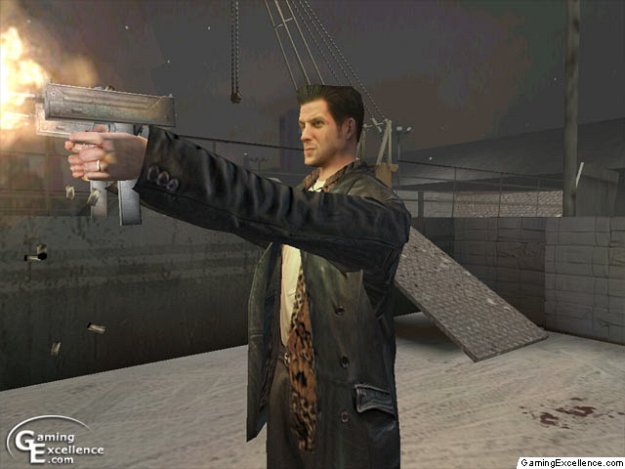 Although no multiplayer mode is present, Max Payne has a large aspect of replayability. The initial game on standard mode will most likely take you about twelve hours to complete, plus or minus an hour or so. Upon completion, several other options of play become unlocked. The "New York minute" and "difficult" modes of play are the same as the first, but one is more challenging and the other involves a time limit where you must complete your required objectives within a certain time period or you will fail. Although it may seem repetitive, I have completed Max Payne twice already, and will most likely do it a third time in the near future as it is simply so much fun to play. Unfortunately, Max Payne includes a linear storyline that is unaltered by the skill level or completing tasks differently. Also included in Max Payne are the development tools, which can be used to design your own levels and missions. Although the box advertises that these tools are simple to use, I found them somewhat confusing and disorienting to use, as a solid background in 3D modeling is required. Fortunately, the release of these tools has prompted many individuals to develop "mods" for Max Payne, and these will easily add to the original time spent completing the primary storyline.

Max Payne is a third person shooter, something that is rarely seen in the games of today. Basically, for those not familiar with the terminology, you are not using the eyes of the character, but rather, are following him in a camera style view, excellent for portraying the scene of a movie. Not once did I experience any major clipping problems with the camera rotation, and not once, did the camera merge with a wall making my view impossible, that of which has plagued many other third person shooters to this day.

The sound in Max Payne isn't just good, it's exceptional. The muzzle as bullets pierce flesh and objects, and the moans of enemies as they fall to the ground assist in setting a general atmosphere, as does the sound of gunfire in the distance, and explosions as they rock the world around you. The conversations between enemies are cunning, and allow you some insight into what to expect when you confront them. The storyline is brilliant, and the cut scenes and voiceovers are exceptional. The background music sets a tone for the game. It is quite entertaining to shoot a speaker that is playing music and for Max to respond with a "thank you". The mood in the general dialog is depressing, and really makes you want to get revenge on those whom committed the vile and unspeakable acts upon Max and his family.

Max Payne was in development for a vast amount of time. Its not very often a game is delayed for such vast lengths of time, usually the game just gets sent out for duplication even if its not ready. In Max Payne, this was different. Its not very often a game gets put on "we will release it when its done" mode, as usually dates are anticipated and announced. When you hear about one of these "you'll get it when it's done" games, that is usually a very good sign of what is to come, and this was an obvious fact in Max Payne. 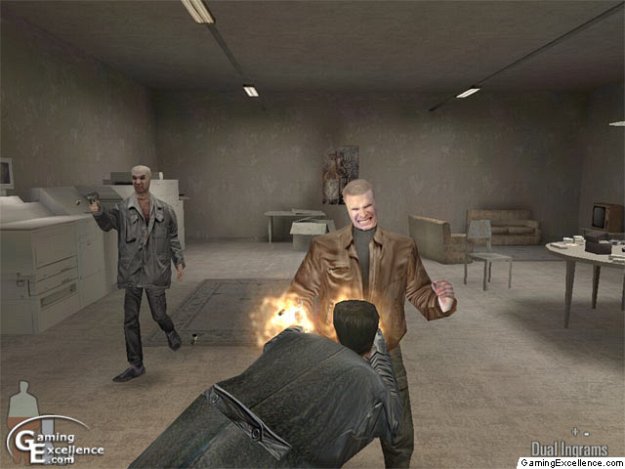 The AI in Max Payne is quite good for a game of this length and magnitude. They will react depending on your methods of attack, and can uniquely change position and tactics in an attempt to defeat you. They will often do their best to surround you, and take you out as quickly as possible. Although it is not perfect, it is a step into the future with the ability of the AI. Occasionally, you will be standing around a corner and will hear thugs say, "Its Max, Get em", even when they did not see you in the first place. Solid AI models are something lacking in most titles, and fortunately, Max Payne is not one of them.

Max Payne includes a variety of weapons for all your destructive pleasure. Baseball bats, lead pipes, pistols, Uzi's, shotguns, grenades, Molotov cocktails, heavy assault rifles, grenade launchers, and everything else that is so much fun to use. If you need to take out a large number of enemies in a small radius, a grenade or Molotov cocktail will do the job well. By throwing a Molotov cocktail at a ceiling above an enemy, it will rain down a deadly cloud of fire, in most cases, killing the enemy quickly. Grenades create a large explosion, and due to the outstanding graphics within Max Payne, this explosion looks nothing shy of photo-realistic. If you throw a grenade in a building with windows, it will most likely blow out every window in the vicinity of the blast, something quite realistic and entertaining to do, to say the least. The variety of weapons in Max Payne is good, and each weapon carries a distinct punch behind it.

In conclusion, Max Payne is an all around exceptional game. The graphics, sound, gameplay, and the addicting and unique Bullet-Time affect all set Max Payne apart from most games on the shelves. If you have enjoyed any other type of shooter in the past, Max Payne comes highly recommended. As many people say, "they don't get much better than this."