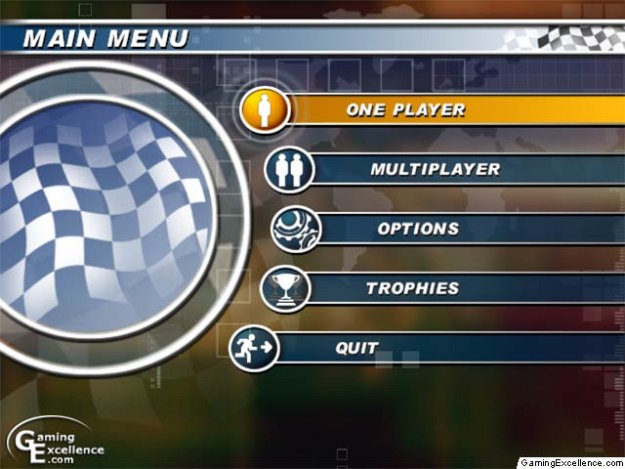 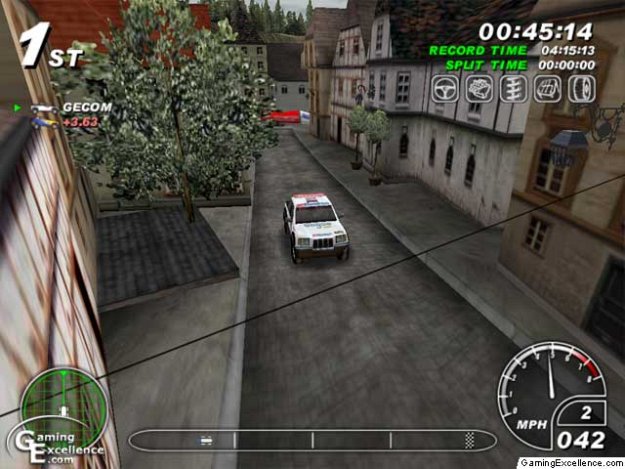 Off-road racing is a world-renowned sport, known in many countries across the globe. A huge variety of racing games of this type are available, although each has a different approach on the sport. Good examples include Rally Trophy and Colin McRae Rally 2.0, both hugely popular titles based around similar concepts. Master Rallye takes this idea and adds a whole new flavor, something unique and rarely seen in PC games.

Published by Microids and developed by Steel Monkeys, Master Rallye is a racing simulation with one basic concept. Reach the finish line first by any means possible. Featuring 42 tracks spanning across seven countries, and a large number of vehicles in which to compete, Master Rallye offers something for any racing fan. Several modes of play have been included, single player offering a variety of different racing options, or multiplayer over a Local Area Network or the GameSpy connection client included on the CD-ROM.

The single player aspect of Master Rallye is very solid. Within minutes, players can be on the track and up to speed in a race. Select from a quick race where you simply select a vehicle and a track, then step on the gas. Other options such as competing in lengthy "championship" style events have been included as well. As you progress through the game and win races, more vehicles and events will become unlocked and available for competition. The developers had a little fun in this area, as many of the vehicles that can be unlocked are of a humorous manner. For example, one of the vehicles that will become unlocked in the Custom category is a UFO, while another vehicle consists of an Ice Cream Truck. Creativity plays key in this aspect, and by adding this extra element into the title, not only did it increase the replay value, but it also made the game a little more entertaining to say the least.

Multiplayer is another excellent aspect included in Master Rallye. Surprisingly enough, Multiplayer in many recent racing titles has been extremely lacking, but Master Rallye offers much in this department. Players can head online with a few friends and use the GameSpy connection software included on the CD, or setup a Local Area Network match through several PC's. Up to four players can compete online or up to two players in a split-screen mode.

Graphics are a key element in racing simulations, and Master Rallye has this area covered well. Environments are highly detailed with a wide variety of trackside objects for added realism. Object textures are beautiful and landscapes are extremely detailed. Vehicle models could use a little improvement, but overall the graphics are well presented. Mud flies through the air and clouds of dust follow the vehicles around the track. Framerate is important for anyone using a lower-end or mid range system, and Master Rallye is extremely efficient in the graphics department. Even on a Pentium III 500 MHz with a low-end graphics card, we managed to receive solid framerates with details at maximum. Master Rallye is a very efficient title and this improves the performance of the game overall.

Gameplay is the absolute most important aspect in a racing simulation, and a realistic physics engine is crucial. The gameplay in Master Rallye is realistic and entertaining, although the physics are a little off from what would be expected. The gameplay isn't as realistic as say Colin McRae Rally 2.0, but is just as enjoyable in the end. Vehicles bump each other while sliding around corners, and driving over large cliffs has never been more entertaining.

Although the box says its important to find your own way through the stages on each track, not much freedom has been included. Players are restricted to where you can and cannot drive, and if you travel off course in any way, the game resets your vehicle to the track. I was looking forward to "traveling the open roads" but this is not really included to the extent that would be expected.

Damage is another critical aspect of racing simulations, and Master Rallye features a solid damage model for each vehicle. Although it is nothing superb, the vehicles can be bent up on both the front and rear, with realistic crumple effects in both situations. Side windows can crack, but the vehicle performance issues are most noticeable. A variety of vehicle components can become damaged, these including but not limited to the engine, chassis, and steering. The more damaged these components become, the more difficult it is to control your vehicle and keep it up to speed. It's not overly difficult to badly damage an engine during a race; something that would cripple you severely and most definitely cost you a possible victory.

One feature that is missing in Master Rallye is the ability to drive from the cockpit of the vehicle. Any racing fanatic (myself included) enjoys the realism of titles, and racing from behind the vehicle or the front bumper takes away from this realism. This is something that was undoubtedly overlooked by Steel Monkeys, and unfortunately, is a disappointment in the end.

The sound in Master Rallye is about standard and nothing too spectacular. The engine sound effects are somewhat realistic, and the crumpling of metal and shattering of glass are well done. Steel Monkeys have added many less-noticeable sound effects as well, examples can be found on a variety of tracks. On one specific track when driving past a small house near the shoreline, you can hear dogs barking in the distance, this is a good example of these less noticeable sound effects. Little sound effects such as this enhance the realism and enjoyment of the title. Generally, the music presented in good form, with a variety of catchy tunes appropriate for this type of game.

Artificial intelligence is of utmost importance for anyone who mainly enjoys competing in single player venues. Master Rallye features a solid AI Engine, although it could use some minor tweaking. Opponents are extremely competitive and make mistakes on their own without player intervention. Sometimes you will seen an opponent slide off the track and smack into an object, often in the more challenging areas of the track. The only problems with the AI in Master Rallye are that they seem somewhat "glued" to the track, and don't react much when a player bumps them. Overall, the AI engine is solid and suitable for a game of this type.

Although it isn't the most realistic off-road racing title available today, Master Rallye offers a solid combination of realistic and arcade style racing. With several modes of play, including a variety of single player options and a multiplayer mode supporting four players, any racing fan should derive some entertainment out of Master Rallye.