Making History: The Calm and the Storm (PC) 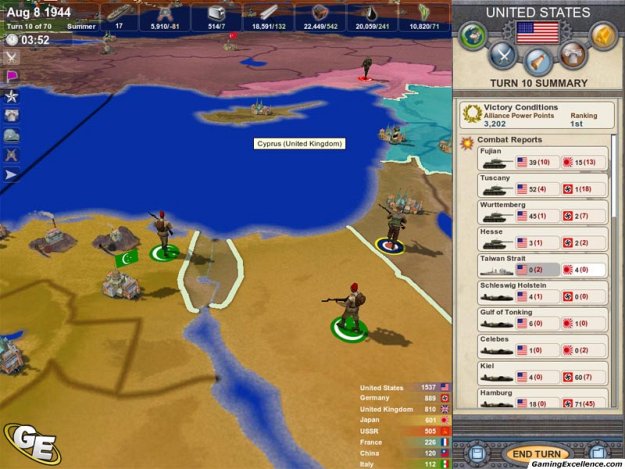 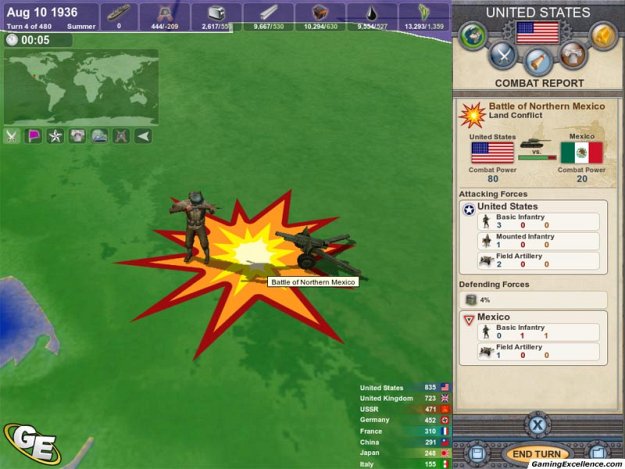 One would be hard-pressed to describe World War II as having been fun, but Muzzy Lane and Strategy First's approach to flipping world history topsy-turvy in Making History: The Calm & The Storm brings gamers considerably close to doing just that. Although avid history buffs might enjoy turning Making History into a play by play recount of the war, the PC game's open-ended outcome sketch allows players to hop right in and go to town with their own renditions of how WWII might have been.

The game features six playable missions that span the entirety of the war, and there are eight nations to choose from: United States, United Kingdom, Germany, USSR, France, Japan, China and Italy. Victory is the point of the game - as it rightly should be - and the player is able to choose from one of three Victory Conditions, including Alliance victory, Nation victory and Ideology victory. Although these conditions can be applied to the single-player mode, the real enjoyment is to be had by connecting with a friend through the multi-player feature and doing one's best to be the first to claim victory.

Although it may be common practice to visit a game's tutorial before attempting to play it, those new to Making History should make the main menu's built-in tutorial their first stop. The basic principles are easy to master - each turn is a week, and you can take as much time you they like directing troop movement and preparing negotiations before ending your turn - however, there are many underlying intricacies that can be overwhelming at first. Like most turn-based strategy games, the survival of your chosen nation relies heavily on resources such as oil, goods, metal and food. Whether fighting by air, ground or sea, all military units also demand arms, which are to be kept on the plus-side if continued warring is to be an option. When advancing troops take over a section of the map, that section's cities and resource providers - such as oil fields - become available. Resources from oil fields and the like are added automatically, but cities require player input to determine which resource they produce. That's simply the tip of the iceberg.

Making History's minimal system requirements are reflected in the aged graphics, but considering the sheer amount of action appearing on the screen at any given time, it can hardly be blamed for its shortcomings. There are some entertaining details, such as the rippling flags on battleships and the comic-book-esque explosions that represent battles. Most of the player's time will be spent surveying their nation's reach, so the graphical detail on the miniature tanks and airplanes will be lost to the multi-hued sections of land that dominate the world map. As easy as it is to look past the far from spectacular unit and city design, the game's humdrum sound effects and music are too off cue not to notice. The overlying battle themes provide a great backdrop at first, but soon become annoying and overplayed. As for the sound effects, the rev of airplane engines and the pop of gunfire soon become tedious to listen to, and the small library of possible variations in sound is the true culprit here.

Despite the game's lackluster appearance and sound, the artificial intelligence is impressive, especially when considering the volume of behind-the-scenes activity. In fact, the game's AI is so intuitive and battle-ready that attempting to start a war before many turns of unit building and resource gathering is a sure way to have one's country trampled by enemy forces. The only apparent negative aspect of the AI is its inability to make any sense when it comes to alliance agreements - even a friendly country on excellent terms may deny an accord for hundreds of turns, if they decide to partner at all. Of course, that makes it all the more rewarding when a strong ally comes to the rescue in the nick of time.

Anyone playing Making History will soon become close friends with the game's world map, and although there are many windows and options to sort through, every action is a mouse-click away. Sending units into battle is as easy as selecting them and setting them on their way with another tap of the mouse. The only real complaint about control is the inability to select multiple units at once; however, units can be grouped together by their method of transport - air, sea, or ground - which makes moving a mass number of tanks and troops a breeze.

Making History: The Calm & The Storm has a lot going for it, from the simple premise of its story to its complex economy and war-making schemes. Players have the ability to warp history as the world knows it, and this makes for excellent replay value; not to mention that Making History's nations are fun to play against and alongside. Despite the game's few setbacks in the graphics and sound departments, it is a breeze to manage every aspect of ruling a nation and entirely enjoyable to do so. Making History is a good addition to any turn-based strategy fan's library.