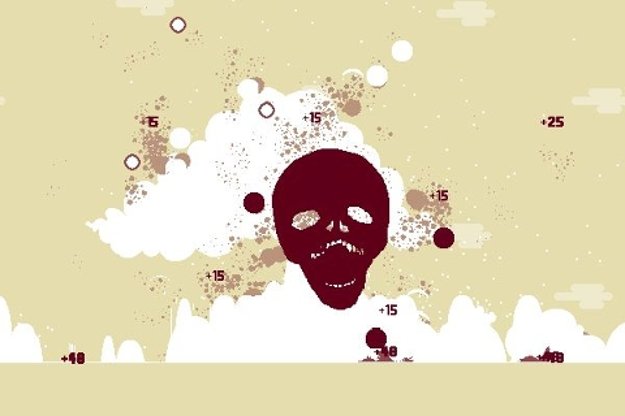 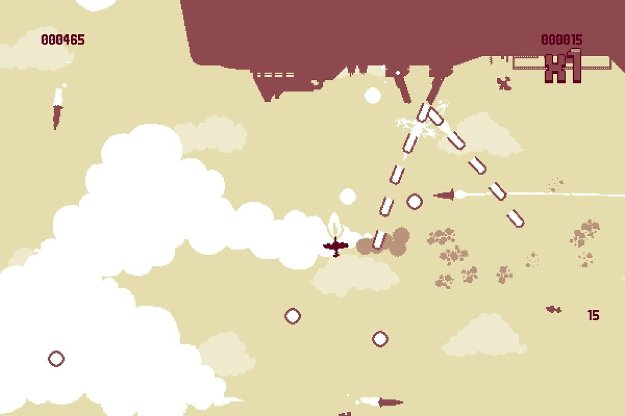 Some days you're in the mood for a realistic airplane combat simulator, with buttons and widgets and accurate wind physics as well as world-accurate airplane models. Luftrausers has none of these. What it does have is crazy airplane designs, bullets as large as vehicles, twisting trickshots and airships that eclipse half the screen and full the skies with explosions. Luftrausers is not a realistic game, but what it is is a whole lot of fun to play again and again.

From the minute you see the monochromatic screen, Luftrausers makes nothing hidden about its simplicity. But don't confuse simplicity for being dull, because this game is nothing but. From the minute your plane is fired out of a submarine, you're assaulted by all manner of attacks from every direction, and it's your job to destroy them. There's no 'end' - except for when you die - and no story to speak of. It's pure, unadulterated score-chasing arcade-styled fun. The more you destroy, the more enemies (and types of enemies) show up, and it's not long before your screen is filled with attacks for you to dodge, requiring deft maneuvering to stay ahead of the damage being dealt to you. And with the fact that the game is a sidescroller with gravity to deal with, it means some interesting tactics like arcing over an enemy, disabling the engine while you turn and fire downwards, then turning back in time to gun the throttle right before you fly into the waves.

There's a pretty good balance in how the game has you chasing scores, and that's how your health regeneration works: when you stop shooting, after a few moments your health starts regenerating (rather quickly). This sets up a bit of a balance that you need to work out between firing at things, trying to rack up your multiplier, and taking a breather in order to recover your health. Since a primary attack of yours is to collide through enemies in order to damage them (and yourself), this sets a sort of rhythm through each of your games - firing and colliding through planes, racking up as many points as possible, then waiting until you can recover your health enough to get the warnings to subside, then returning to your enemy destruction.

What really hampers the score-chasing enjoyment, however, is the element of randomness that each round has - there will be games where your screen is filled with easy-to-destroy enemies, others where you have to frantically try to hunt something down before your multiplier vanishes. The times where this happens are too frequent, and are really frustrating, as you know that it's just a random roll of the dice that's screwing you over, and not a lack of skill, which is much of the game is based on.

Primary to Luftrausers is how you design your plane, which is composed of three parts: the weapon, the body, and the engine. And while you start with a competent design that lets you shoot your way across the skies, it's not long before you're pining for more. By unlocking challenges with each part, such as shooting down a certain number of enemies, flying a minute without firing a shot, or reaching score and multiplier thresholds, you unlock extra parts for your plane. The game's real variety comes from these parts; for example, there's a jet engine that propels you forward in bursts by firing bullets behind it, a body that lets you propel through enemies without taking damage (but as a tradeoff reduces your health greatly), and a weapon that fires a powerful beam across the screen, but which reduces your turning speed. 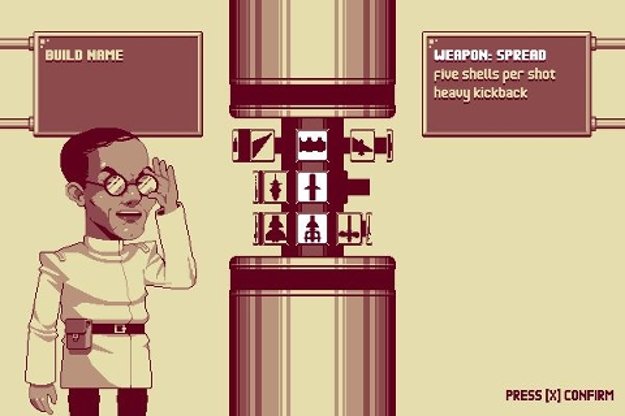 In addition with a unique name and a slight variation to the soundtrack (which are really nice touches), each combination of parts brings a new style of play to the game that can completely change your playstyle. While one combination might lend itself to charging headfirst into the fray, another might make taking on enemies by springing in and of the water more viable. Another can let you zoom across the battlefield dropping bombs, or hurtling through opponents one after the other. The challenge system lends the game a feeling of progression, and encourages you to try out new parts that you may not have in the first place, and just seeing the absurd sort of tactics you can develop is half the fun of the game itself.

And, if the normal game isn't enough for you, there's always the devastating SFMT mode, of which each part has a single challenge for. Ever wonder what the sky would look like covered in bullets and enemies the minute you launch? Look no further.

Luftrausers is a really good game that shows what a single concept, refined to a diamond sheen, can become. No epic stories, no quests to save the world, no grinding, just a plane that can spit bullets (or lasers) and a limitless supply of enemies to contend with. It's great in bursts, and with the challenge system for each part there always feels like there's something to try for. Fun to play and watch, Luftrausers really just does a good job scratching that simple arcade itch.