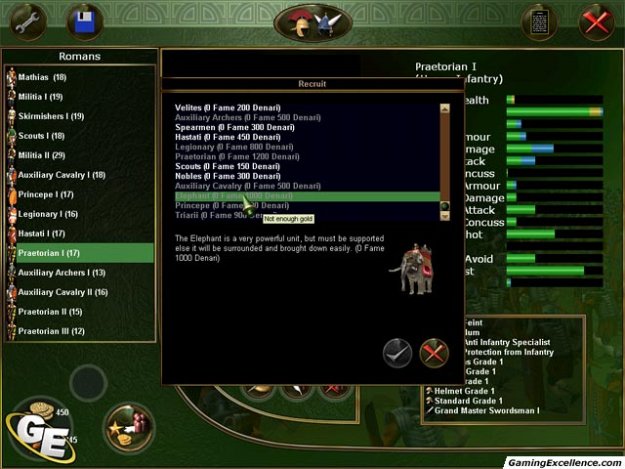 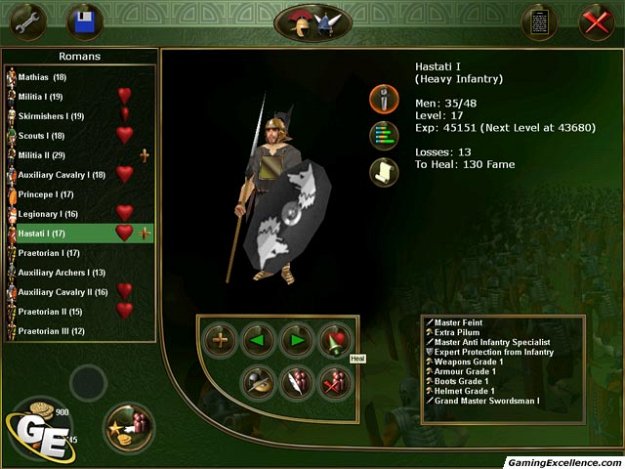 As to be expected, many budget titles fall short of an enjoyable experience, something seemingly incomplete or lacking in polish. Legion Arena, however, is different in this respect. While there isn't a whole lot of game within it, what is there is fairly robust, and I found the hours whizzing by as I took on the enemies of my legion.

Legion Arena is primarily a tactical strategy game, with the space between battles filled with unit management. And that's pretty much it. You just go from battle to battle, while the story of the game is a lesson to the history of the Empire. How you manage your units, both on and off the battlefield, will determine if you'll be able to make it to see Rome at its height of power.

The management portion is the most important area of the game. Between battles, you'll be given an overview of your units (as well as your unique commander unit) and the ability to perform various tasks. You can recruit new units to your legion, purchase armour for the units you already have, and, if your units have gained enough experience from battles, you can level them up. This involves giving bequeathing upon them skills that raise various stats or allow them to fight more effectively against certain units. While they might not seem like a great difference to your abilities, over time and various levels, all the bonuses eventually add up and can greatly aid you unit in battle. Managing your dinars is a critical aspect of the game, whether you decide to save your money for better units or spend money on equipment for units you already have. Customization of these units plays an important role, since while you can make a unit balanced enough to take on a wide range of foes, you can also specialize them to be able to take down cavalry, resisting their tramples, or able to defend against waves of ranged attacks while they close the distance. Simply put, this is my favourite part of the game, since battles can be won in this screen before they even start.

The second part of the game is the tactical portion, where your units will be facing an opposing army. Before each battle, after a brief snippet about what the point of the battle is, you're allowed to place your units on the battlefield, as well as the actions they should take (holding position, advancing, and so forth). This can be just as important as what you do with them afterwards, since certain units have bonuses and detrimental effects based on what terrain they're on. Often, the objective of each battle is just to eliminate all the enemies, other times you'll have special objectives such as eliminating the enemy commander, or simply surviving against a powerful force for a specified amount of time. Like many tactical games, what type of unit you use against another affects the outcome of battle, so you'll have to choose the battles well, lest you find your infantry being trampled by approaching cavalry. If you find yourself losing, however, you can just retreat from battle. No losses are recorded, and you can restart the battle without any consequences.

Unlike other strategy games, each unit requires a certain amount of command points to issue a command. Your command points regenerate over time, and certain skills for your commander can influence the number you have and the rate at which they recoup, but managing them is an important part of the battles, since your units might find themselves without an opponent while a battle rages across the field. If you feel like you'd rather have a simpler type of game, you can turn off this aspect, but it eliminates a fair portion of the strategy.

There are a few problems with Legion Arena. The AI of your units is heavily limited, and after a small battle between troops, unless there's an enemy unit to attack very close by, your unit will just sit there doing nothing, while your other units fight on nearby. Additionally, the graphics are pretty low-quality, and in the heat of battle, your units will often just mash up against the enemy so that all you see are flailing limbs that may or may not belong to your side. It makes selecting units frustrating sometimes, especially when you've got multiple squads in a melee.

Since your performance in a battle will outcome how you do later (with how much experience you earn, what you do with the dinars) your progress early on will strongly dictate how well you do later in the game. This definitely did not appeal to me (I prefer non-linear tactical games), but I know many that will enjoy that kind of gameplay. Luckily, the game makes the levels well-balanced: they're rarely too hard that you're continuously losing over and over again, but they don't get too easy that no strategy is even required.

Though it may appear as a typical budget title, Legion Arena turns out to be a fairly decent game. It's definitely not be for every one, and primarily targeted at the strategy buffs, as you'll spend most of the game looking at either a battle map or a unit overview at any point in the game. The history-lesson-as-a-backdrop is somewhat interesting, and the tactical portion of the game has some depth. It's nothing revolutionary, but if you're a serious fan of the genre then Legion Arena might be worth a look.