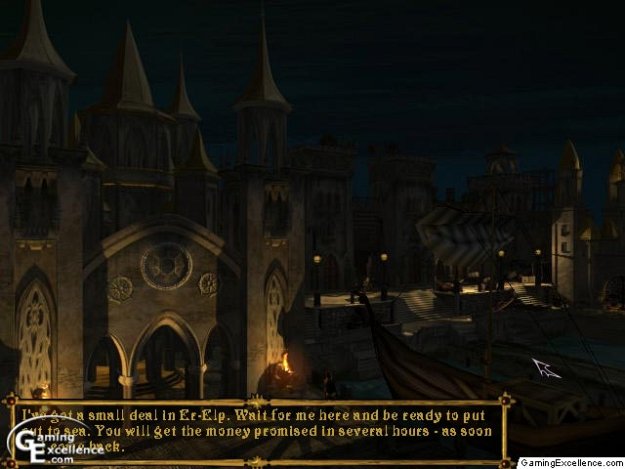 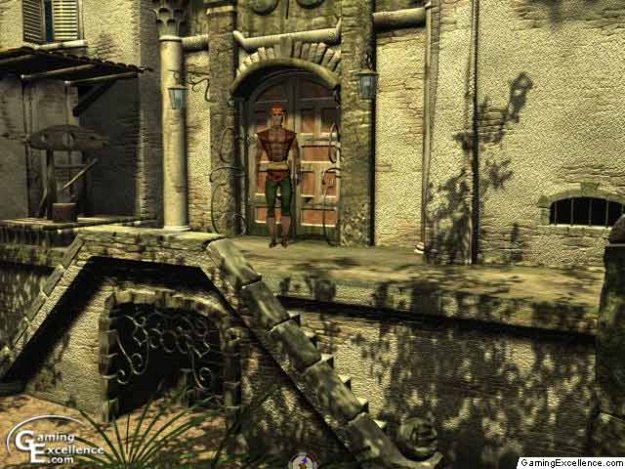 Once a genre featuring many illustrious games, adventure titles have gone through a slow and painful death as graphically enhanced action and simulations have taken precedent. Jazz and Faust takes you back to the time when adventure titles lead the pack in an attempt to spark an interest in the modern gamer, unfortunately the many problems that plague the title do not present much of a compelling argument and as fact will probably be overlooked.

Developed by Saturn Plus and produced by the Russian publishing giant 1C, Jazz and Faust is the company's debut title on the US market. Putting you into the position of a daring sea captain or that of a stealthy smuggler, Jazz and Faust takes place in the era of exploration, one of mystery and curiosity. The player is given the option to progress through the storyline through the eyes of two distinct characters coincidentally named Jazz and Faust. Unfortunately, these intertwined stories are lacking depth and the ability to keep a player interested, just one of numerous problems.

The game mechanics and core engine used in Jazz and Faust is based off the classic adventure model. Character navigation is directed by a simple point and click method. The environments are composed of static bitmap files with a variety of interactive 3D characters, and "links" that lead to other locations. The mouse pointer changes upon moving over an object of interest, bitmap link, or character that can be spoken to. These mechanics are quite simple, however their implementation leaves a little more to be desired. Objects are often notoriously small and extremely difficult to find, especially in dark areas or in the middle of the night. On occasions, players will find themselves clicking the mouse in what seems to be random sequences in an attempt to discover a minute detail, something that will derive more frustration than entertainment.

Installation of the title was smooth, and the manual included is adequate but nothing spectacular. Upon launch of the title, players will be dismayed by the horrific menu system and introduction. Bland, depressing colors and a boring navigation is not necessary the best method of grabbing the players attention, virtually anything would be better suited than what is currently presented. This sorely lacking interface is the first of problems in Jazz and Faust, but it certainly won't be the last.

As mentioned earlier, the title allows you to play through two distinct storylines through the perspective of Jazz and Faust. The title opens similar for both characters, stranded in the city of Er-Elp Jazz is found in that of a prison cell on the charge of smuggling. The cell is easily opened, but for some reason Jazz must awake the hung over prison guard before he can leave the building. This is strange, as the guard simply tells Jazz where he can find his ship and does nothing to unlock the front entrance, we can just assume it as much. These irregular details and unexplainable events will appear throughout the title, players will have to talk to characters in a specific order for the storyline to proceed. When the character Faust is selected, the plot opens in a similar manner. Under the cover of darkness, Faust is approached by a young woman seeking hasty transport from the city. It is not until the next morning that both characters learn of the two murders that occurred during the previous night. Unfortunately, this is about as interesting as the plot will get, as the storyline goes downhill from here on in. As the title progresses, the puzzles and tedious work of moving from one location to another become extremely boring and repetitive. An adventure title is supposed to spark an interest, appeal to the player and remain entertaining from the introduction to the conclusion, just one area where Jazz and Faust falls short.

The visual detail presented in Jazz and Faust is without a doubt the best aspect of the title. The game uses static bitmap files as the background for each environment, beautifully rendered but lacking interactivity. The detail presented in each bitmap and usage of texturing is remarkable, everything from the faded stone walls to the lush and vibrant colors. Each character is modeled in three dimensions; unfortunately these models are mediocre at best. Character models lack everything the environments aspire to, detail is minimal and characters are bland and unrealistic. However, Environments are not without any interactivity, the flicker of the flames and shadows cast add depth and realism the game. The game also features complete day and night cycles, the gradual changes and colors as the sun sets in the distance are well developed. The environments are spectacular, it's a shame the character models could not be improved, as it would greatly enhance this aspect of the title.

Every adventure title needs sound effects and solid speech, another area where Jazz and Faust falls a little short. The background music is of good composition and adds to the atmosphere, but can become extremely repetitive. The title also features a solid complement of sound effects, whether it is the water splashing against the harbor wall or the shatter of a wine bottle as it hits the ground. The most important aspect in the sound category for a title such as this is the vocals, and unfortunately the dialogue in Jazz and Faust seems somewhat misguided, loosely translated and following an irregular pattern. The acting also mediocre; some of the voices are well presented while others are dull and uninteresting. An improvement in this area would be a great asset to the game's overall entertainment value.

Jazz and Faust had the potential to be a successful adventure title that brought the genre out of it's slump, and was one title I was personally looking forward to. Unfortunately, the lackluster and nonsensical puzzles combined with an uninteresting storyline and mediocre gameplay are the major problems, a shame since the environments and static backgrounds are so beautifully rendered. Jazz and Faust may seem like the epic adventure of a lifetime, but be forewarned, as looks can be deceiving.