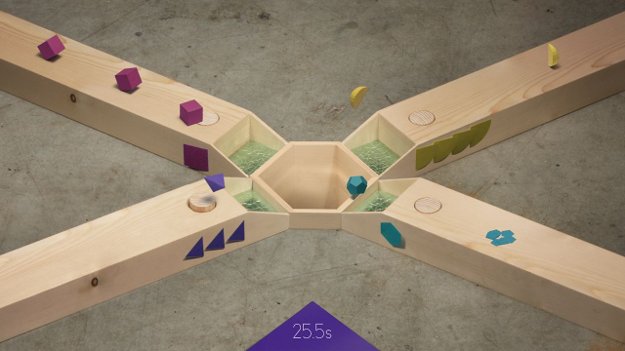 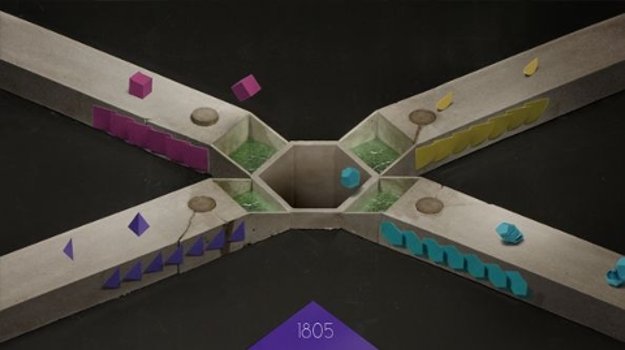 Stemming from a prototype made for an exhibition at La Gaîté Lyrique - a digital arts and modern music centre in Paris, InSynch was created over two years by three Parisien friends (to form Them Games). Presented as an abstract rhythm-action game, with a handmade aesthetic, it's immediately apparent that an enormous amount of care and attention has been poured into how it looks and moves. Everything you see on screen was hand-crafted and animated using stop motion techniques, the music that evolves to play alongside was created by musician qnp using multiple instruments.

For $5/€5/£5 you get four individual levels/music tracks over two game modes, as well as a 'making of' in the form of text and photos. The game itself manifests as four lanes that run from the corners of the screen to join a central well. Three dimensional shapes (cubes, dodecahedrons, tetrahedrons, and spherical segments) travel down these lanes towards the center, over a circular spring that activates when a button is pressed. It's up to the player to time their button presses to launch these shapes over a small gap and into the central well. Each lane and its shapes represents an aspect of the music that plays over the current level, be it a drum beat, keyboard melody or some other sound. Shapes that fall into the central well add to the particular musical aspect that they serve, each of its ten levels of intensity demonstrated by the paper symbol cut-out accumulating along the side of each lane.

Of the two game modes, Explore is easily the more interesting. It allows the player to build up any of the four tracks in any order they choose without the possibility of failure. You can raise a particular aspect of the music through its ten levels, then add in another, or let it fade, juggling the shapes as you see fit. Once all four lanes have been fully powered up the climatic final version of the track kicks in and you get until it winds up (usually around two minutes) to rack up points by flipping shapes into the central well.

The other mode, Exploit, was a much more stressful way to play the music track at its maximum level. Essentially a survival mode, players are challenged to keep throwing shapes into the centre for as long as they can, with the rate at which the shapes appear increasing as time goes on. The symbols along each lane are lost when shapes fall into their respective pits.  If one of the lanes lose all of its symbols, the music, and the game, comes to an end. It's quite possible to fail the mode after only a few seconds. Without the development of the music, I found little of interest in this mode.

Each of the tracks that plays out is based on the materials that the level has been constructed from, though I only found half of them genuinely memorable. The first track, Wood and Bass - its woodwind hook along with the animation, wouldn't have felt out of place in an early episode of Sesame Street, and the reggae inspired second track, Resin the Volume, had me nodding my head along with the bassline. The remaining two tracks, Plaster Blaster and Concrete Music were more ethereal and less interesting as a result.  I also noticed a few rough aural edges where new aspects of the music were played in or removed. Audio pops, clicks and stutters were common during my time with the game, as if it was struggling to keep up with itself.

The originally stated aim by Them Games was to bridge the gap between musical instruments and rhythm games with InSynch. In some respects they have succeeded, however it's puzzling to me that while this little indie title suggests a certain degree of synchronisation will take place, there wasn't a great deal to be found. The shapes move down their lanes independently of the music. They weave, spin, split, bounce and slide wonderfully, their animation is really very impressive, but their movement is not tied to the music that plays at all. The number, order and speed at which these shapes are spawned seems arbitrary. Again, not tied to the music. The shapes don't appear to represent consistent aspects of the music. One shape may prescribe the ascent of a keyboard melody on one level, but develop a bassline or some percussion on another. Activating the springs that throw the shapes into the centre does not have to be timed with the music, only with the position of the shape in relation to the spring. The opportunity was there to tie all this together to make a more cohesive, synesthetic experience, but instead the movement on screen seems separate, if not altogether secondary.

That's not to say that the game is without merit. It certainly has a likable charm, but I found that the distinct disconnect between the music playing and the actions happening on screen lessened my enjoyment. Considering InSynch more like a musical toy, than a rhythm-action game, I gained far more from it.  It's an impressively neat, if rather slight, package that has clearly been a passion project for Them Games. A huge amount of work must have been required for the animation alone. Their effort should be applauded, but I was left wanting a different game, one with a tighter weave of gameplay and music.