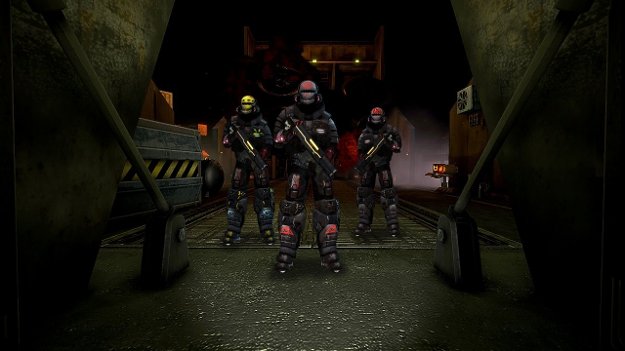 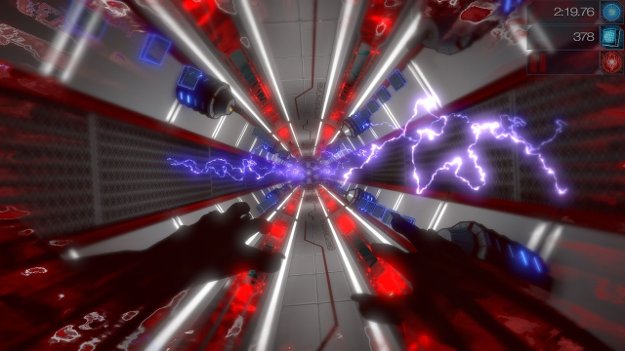 When you bring up the runner genre of games, most hardcore gamers will roll their eyes. A genre where your character just runs forward at all times and all you can do is shift their position or jump? That’s for lame casuals who only “game on their phone” or some other such rubbish. I’ve never ascribed to this mindset. I’ve always found the runner games to be fun, simple and addictive but also massively challenging. Sure, they might not be hard to just pick up and play but trying for a high score or reaching some of the later areas is often insanely challenging – just how I like my video games.

But there’s a key to this and it’s one that Infinity Runner kind of stumbles with – the challenge should be fair. It often substitutes cheap shots or bad design decisions instead of providing you with legitimately challenging gameplay and that’s a serious problem with any game but especially for a runner. It’s not like the game is going to be buoyed by solid multiplayer or an awesome storyline. 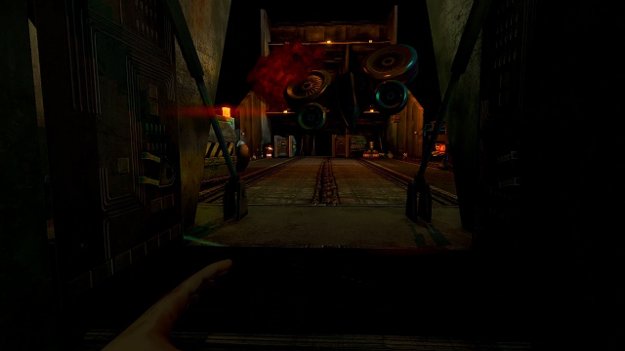 Speaking of storyline there is actually a “Story Mode” provided here and it is, in theory, not that bad. You’re a mysterious person, seemingly male, who awakens from stasis on a gigantic ship known as The Infinity. There are two relatively short levels that make up each section of the ship, ranging from the jails to the bridge, with a bit of a story tagged to the beginning and end of every individual stage. Basically all it tends to be is just a minute or so of dialogue explaining what you just went through before the next stage starts.

Oh and you’re also a werewolf apparently. This is found out relatively early on in the game so it’s not much of a spoiler. Apparently there’s a whole race of werewolves out there living amongst humans and a few of them are aboard this ship. Most every stage has a jet injector syringe that, when grabbed, turns you into werewolf form. Here you’re immune to damage, automatically navigate the stage and pick up all data packets you pass (basically just points) and bash through the enemies without effort. What’s really fun is that you can blow through select walls, entering a power conduit that lets you run along the walls and ceiling while you avoid electric obstacles.

Honestly this is all a lot of fun, especially when you’re in the arcade mode. It can feel really awesome to just gunshot through a level, dodging everything that comes your way and beating down all of the enemies in your path. This almost zen-like badassery has this in common with games like Canabalt and Temple Run. But with that said, even though it’s got a pretty decent setup, the game has a number of issues that really cause it to stumble. 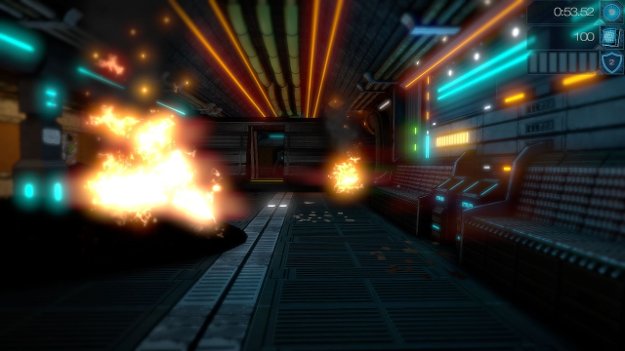 The problem here is that the gameplay itself is incredibly hit-and-miss. One of the biggest issues is that of the PoV itself – a first person view works great for providing a sense of speed to the game but it also makes judging certain elements too difficult. When a pipe falls down from the ceiling it can be hard to judge whether it’s in the middle of the screen or more to the right. This combines with the fact that some objects must be slid under or jumped over and you really only learn how to by trial and error. In many cases there is no “Oh snap, I can’t believe I just survived that!” and is instead a matter of die, retry and die again until you figure it out.

A lot of the levels have “Gotcha!” moments, where things just jump out at you like a jack-in-the-box and you have almost no time to respond. When you can see a danger coming it’s easy enough to work out what you need to do but these moments are too rapid most of the time forcing you to lose one of your precious lives. A cheap shot like this just doesn’t belong in a runner game if they’re expecting you to run levels of any real length. You’ll go through your three lives in less than four minutes with some of the garbage this game throws at you.

Even when the game lets you see threats incoming you might die anyways thanks to shoddy detection – I died repeatedly to the zip line sections, requiring that you jump at a certain time to grab the line and slide across a pit, since I would sometimes jump and just miss the line anyways. There’s another trap like this when you’re in werewolf form and it has the exact same problems which is doubly insulting: who the heck dies when they’re in the invincible werewolf form?

Another issue that doesn’t help is the stupid fight scenes that occur every so often. Your character runs into a room only to be confronted by one to four heavily armed enemies. A series of quick-time event style button prompts will pop up on the screen and you have to tap it in very quickly. Normally this isn’t a huge problem – the time you have is fairly forgiving. But even this was screwed up somehow since the button prompts for the RB/LB are reversed. The button for RB is flipped so it looks like the LB meaning it is impossible to just go by the shapes there. Having to stop to read the prompt can often get you killed. That’s just poorly programmed.

While these problems are an issue in the arcade mode… who cares? In this mode you can just die and start all over again. But it’s the story mode where these issues will start to stick in your craw. Dying repeatedly to these cheap shots slowly wears you down over time until you reach the finale where it all comes to a head. To put it as bluntly as possible the final levels of the story are utter garbage.

I’m not one to just dig into a game for wanting to challenge players; I am after all a huge fan of Dark Souls and Super Meat Boy. So for me to call out a game for difficulty means one of two things: either it’s less legitimately challenging and more frustrating or the difficulty level is just too much. Infinity Runner settles comfortably for the frustration factor – instant kill cheap shots come out of nowhere, finicky controls ruin the zip lines and several of the hazards either move or sit or such a position that it’s incredibly hard to see what you need to do to dodge them. Then, to really make sure you know what true frustration is, you have an impossibly frustrating batch of quick time events to deal with the final boss. When you finally overcome that then the game has the audacity to end with a “To be continued…” and I just threw my hands up.

A runner game doesn’t need a story so I feel kind of stupid criticizing this one. But if you’re going to include a story mode in your game when it doesn’t need one prepare to be called out on it when it’s utter crap. What's even more galling is that in arcade mode you get to literally see the entire ship pass you by, running straight from detention areas to the docks and all the way to the end, really letting you get a feel for just how huge the ship is. So by turning off the fights from the arcade mode options and just avoiding story mode you get a feel for just how much fun this game could have been. But sadly they tried to add on more.

The graphics are also on the dubious side of things. I understand that a runner game doesn’t need great graphics and they could even be a hindrance – If they cause the game to stutter then you’ll rapidly grow to hate the game anyways. But here they look incredibly primitive. It’s primitive to the point that it looks like this is the best they could manage with either the manpower that they had or with the game engine they chose to use. I’m not sure who or what to blame but the end results are not exactly pleasing. It feels like if they had gone for a more stylized approach they could have created something that looked really good. There’s ambient music and a tiny bit of voice acting to be found here. Much like the rest of the game it’s fine. The music isn’t distracting and the voice actress does a really good job. She just doesn’t have much to work with.

When it comes to Infinity Runner the main feeling one is left with is mediocre. The gameplay is fine but there are a number of problems. Having a storyline would be a nice spin on the formula but they chose to end it in a horrible fashion. Playing as a werewolf is awesome but dying in that form due to aggravating controls really ruins the fun. One could break down every aspect of the game like this and that’s just really disappointing. It might be worth a pickup when it’s nice and cheap but it’s still hard to recommend.