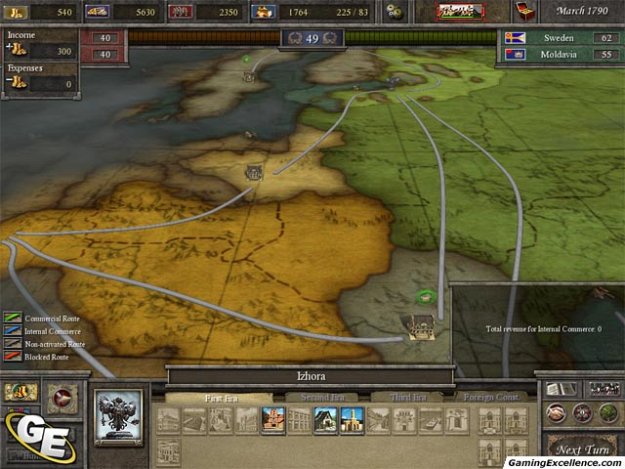 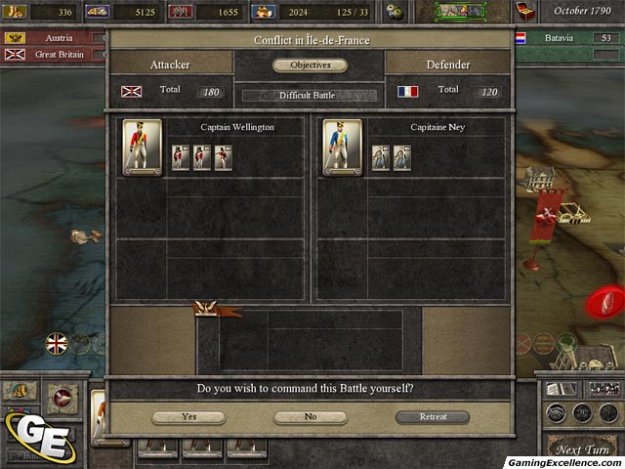 In the world of strategy games, there have been many noteworthy titles developed over the years, most popular examples being the Age of Empires series, Civilization, Empire Earth, and one of the originals of the genre, Starcraft. And, each year there are ever more titles being developed, some of which will gain recognition among this list (which is far from complete) of classic games, and others will fall into obscurity. So just where does Imperial Glory fit it?

Imperial Glory, the newest addition to the genre developed by Pyro Studios and published by Eidos, follows the same historically accurate timeline scenario as many of the other strategy games do, with a few exceptions. First, the campaign is set in a relatively short period of time. In comparison to some of the others, this means from 1789 to roughly 1830, as opposed to, say, a thousand years. However, the exciting aspects of this limited span can be seen almost immediately. First of all, the late 18th and early 19th century was not all that long ago in the grand scheme of things. This allows for some classic battles that were not out of reach of, say a somewhat "modern" history class. Perhaps the most noteworthy of them all is the Battle of Waterloo.

Of course, Napoleon is a central character to this game, and the general anxiety and uneasiness of the European - Russian area of the time provides a great basis for the strategy genre. Managing relationships with neighboring countries, deciding who to ally with and who to invade, setting up commercial trading routes and sending in your troops to declare war are all important gameplay decisions to make.

All of these options and more are presented to you in Imperial Glory. Now, you may be asking yourself is it turned-based or real-time? The short answer is that it's both. Let me explain a little more about the gameplay itself before you start the questions. The core of the game, from buildings to troops, diplomacies, alliances, hostile takeovers and such, is completely managed in a turn-based environment. However, players have the option of playing out battles in a fully 3D map in real-time, or they may simulate the results.

Both options have their pros and cons. Unfortunately, load times to the real-time elements and back to the turn-based map are extremely long. However, by playing out the battle yourself, you are able to take advantage of strategic troop placement (ie: on hills, in buildings, etc) to gain an edge. To win a battle that is simulated on the other hand, you will need a significant personnel advantage that you may not require as much if you were to play it yourself and use strategy over brute force.

Imperial Glory has five basic game modes: campaign, historic battles, quick game, multiplayer and the tutorials. Starting at the end of the list and going in absolutely no particular order, I will state my opinion on the tutorials. First, there are three of them, each focused on a different aspect of the game. Although this is not a bad idea in itself, after completing all three I felt as though I had learned nothing about the game. Each one is extremely short, and with the focused approach it is hard for players to get a feel for the game as a whole. With that said, I still recommend going through them once, or if you don't want to sit through all three, take the one on the management aspects of the game over the others; they are more self-explanatory.

Now for the historic battles. At first, this seems like a cool feature. Who wouldn't want to recreate the Battle of Waterloo? However, the issues here are simple: there are only five to choose from, and they are played in the game's real-time engine only. This limits strategy somewhat as troops are set out for players, and there is not much value-added overall. But, if you're in for quick (and relatively short) fun, they are good for a little bit of entertainment..

The main element of the game, however, remains the campaign. Featuring two different modes (total victory and time-limited) and five different empires to choose from (Britain, France, Austria, Prussia and Russia) as well as a constant mix between turn-based management and real-time action, this thing is a behemoth. Therein lies another problem: if you like relatively short (ie: 2-3 hours) matches, you're in for a disappointment. Since the campaign is not divided into missions like other games, players are basically left on their own to decide how best to divide up the action by saving and setting it aside until next time. With games lasting a minimum of 5 hours or so (if played well at appropriate difficulty levels), and having no upper limit, I can't see many people playing this one in a single sitting.

The good news is that the management interface is relatively intuitive and easy to use, allowing for fairly short turns for each player. Although by no means impressive visually, the graphics here are suitable to the style of play. On the other hand, if you can wait through the load times, the graphics in the 3D real-time portions are actually quite impressive. The terrain is highly detailed and the water (in the sea battles) even more so.

If there was one specific item of the entire game that is not on par with the rest, it would have to be the sound, a total tragedy. The in-game soundtrack is extremely basic, and becomes very repetitive during long games. Combined with this is the abysmal voice acting. Not only are the voiceovers bland and uninspiring, but they are spoken poorly as well. The first thing to come to mind is a horrible French accent that sounds worse than I do when showcasing my "bilingualism".

In the end, what it comes down to is this: Imperial Glory is a satisfying entry into the strategy genre, if you enjoy turn-based play. The real-time elements are simply a small part of the game, even though they are done well. This game, however, does not have a compelling campaign story to tell with its lack of missions and other features such as multiplayer with only 2 to 4 players, and the historic battles may not be enough to keep players interested long-term.