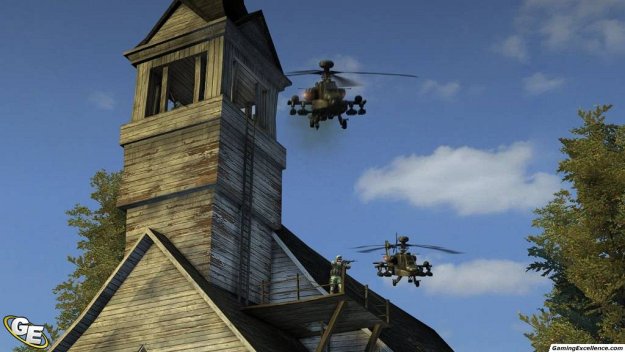 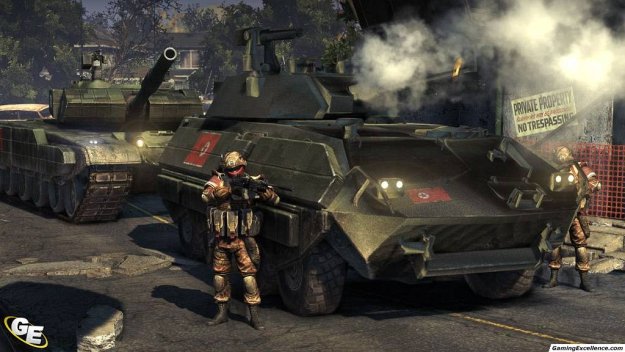 I've largely given up on shooters in recent years. I've lost count of WWII shooters on store shelves. There was a bit of novelty to be found in the horror angle for a while, but that's rapidly getting polluted too. The futuristic flavour taunted variety by introducing all sorts of weapons and ammo, but in the end, if it expels a lot of stuff, packs a punch and is only good at short range, it's still a bloody shotgun. It seems like any half baked setting and paper thin storyline is worth seeing the light of day.

Along comes Kaos Studios to slap my pessimistic face, looking to shake things up on a whole new scale, and strutting their stuff all over the E3 show floor. Known for their attention to detail, the developers of Frontlines: Fuel of War are out to show the world that they've got some pretty big ideas too. And so begins the story of Homefront, a game responsible for bringing 100 soldiers in vaguely Korean-looking army outfits marching down the halls of E3.

Why Koreans? It's all explained in the trailer, which can be seen here. No, I'm not so lazy that I won't digest it for you; it's just a really awesome video that forms the basis of my argument in favour of your inevitable $60 expense. Go on now, watch it.

In case your jaw dropped so hard that you had to leave for the hospital halfway through the clip, or if you otherwise insist on refusing to watch it because this article is just that captivating, let me spell it out for you. As a brand new IP from a relatively young developer, Homefront has the most well-developed fictitious backstory of any shooter in recent memory.

This is the part where fanboys of the umpteenth regurgitation of a series will argue that story has nothing to do with the enjoyment of blowing shit up. While that may be true, there's something for you further on in this article. Those of you who would like a scoop of intelligencecream with your mind-numbing action, read on.

Homefront is an extrapolation of North Korea's current unstable state of affairs in a story written by Red Dawn author John Milius. He suggests a future where the Koreans have been brooding world domination while the rest of the world is bombarding them with red tape instead of actual ammo, for the first time in recorded history. You already know how that turns out, because diplomacy makes for very boring shooters. It starts with North Korea attacking a South Korean submarine, which of course vaguely points to the very real events of March 2010 (no word on whether they added this into the video at the last minute -- conspiracy theorists, do your thing). In a nutshell, a few other plausible things happen in the extrapolated timeline, leading to the launch of a Korean communications satellite in the mid 2020's. That satellite fires a massive EMP over the United States, instantly destroying all electronics and reducing the super power to a third world country (did anybody notice that Canada was apparently immune?). That's when the Koreans come over. The game is thus set in the year 2027, where you're enlisted in a militia insurgence against the Korean occupation.

The developers had two principles driving their creative artwork. Number 1 was to create an experience where the familiar has become alien, which is obviously accomplished by changing the almighty US into a war zone. The scenery basically looks like War of the Worlds (the movie) minus the dark shadows and sulky weather. Someone please tell Hollywood that the sun doesn't stop shining just because your country's been invaded. Anyway, the number 2 principle was to emphasize the human cost of war. The immersive storyline will pair you with a ragtag bunch of civilians and ex-military, living in destroyed shacks that once were american suburbs. We didn't get the whole picture during the relatively short demo but, as my colleague pointed out later, they were so confident in this aspect of the game that they spent a large half of the 20 minute demo walking through the shelter and its backyard, talking to the NPCs. Sounds odd, I'm sure, but the whole setting really does look and feel like an occupied America.

For the action part of the game, Homefront turns the table on traditional tactics. Gone are the large squads of trained assassins, and the superior firepower. Instead, missions will rely on guerilla tactics -- gun and run is the way to go and brash all-out assaults will only result in bloody perforated lumps of flesh, largely on your side. This is the kind of Korean kickass that your enemies wish they were capable of back in the Crysis days.

Homefront continues the immersive gameplay on a whole new scale by including the player in action sequences that lesser games leave in cutscenes. For instance, we saw the player climb into an observation post only to see an RPG coming straight at the camera. Ducking for cover, the rocket hits the post and causes it to come crashing down, the pavement approaching all too fast. Dizzily stumbling through an industrial yard, the player eventually comes upon an attack chopper. Using some kind of robotic attack vehicle, the player shoots it down.. but the giant fireball comes straight for the camera. Blown out of the way, the player is then rendered unconscious. Waking in a firestorm, the player crawls out of the area, barely making it out alive. All of this happens in first-person view.

Kaos calls this new playable cutscene action the "drama engine." While not going into much detail, it is revealed that key action scenes dynamically attach themselves to the player to ensure that the in-your-face action always actually happens in your face. It's difficult to describe, but suffice it to say that the 10 minutes of adrenaline packed continuous action was exhilarating. Given that they've actually given this concept a name with "engine" in it, one can only assume (and highly hope) that it will be pervasive in the game.

This is not your average shooter. If the E3 demo is representative of the overall game, Homefront has the potential to leave everybody breathless by the end of it. Details about the multiplayer are expected sometime in August. The game is set for release on the PS3, Xbox 360 and PC on February 22, 2011.