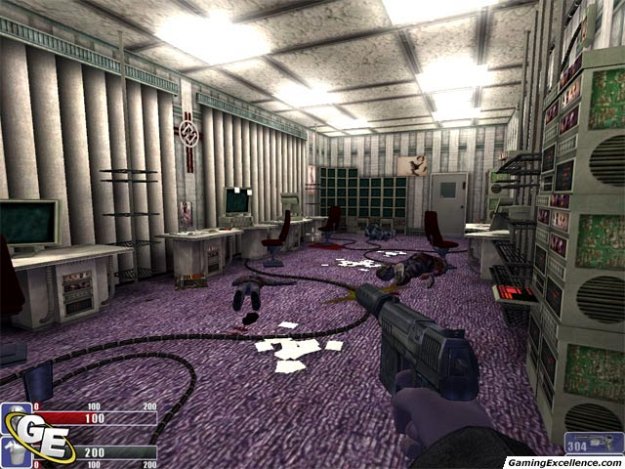 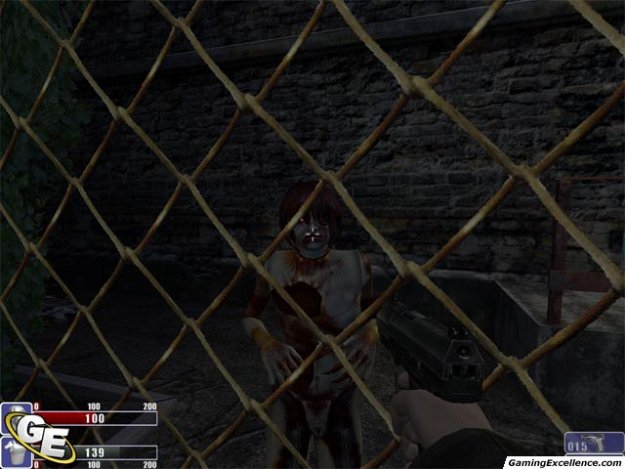 We were recently given the opportunity to try out a build of Buka's upcoming first person shooter, Hellforces, which is scheduled to be launched on the PC sometime later this year. Hellforces is a first person shooter that puts you in the shoes of Steve Geist. The game opens with Geist under interrogation by an Interpol agent, and the story works backwards as you replay the events that transpired up until that point. The gameplay starts off by having you follow your ex-girlfriend into a quarantined section of the city, as she tries to reach her drug suppliers. You end up picking up a nice and heavy lead pipe before the opening cinematic ends and you can begin to swing it at anything that moves. Usually, "anything that moves" refers to anything and everything. The most common foes you'll come across are zombiesque human beings who gladly refuse to die when you blow a 6-inch wide chunk out of their chest or off of their head. Wonderfully pure carnage.

Hellforces will sport a vast array of weapons at your disposal ranging from melee weapons to rocket launchers and plasma guns. There are at least half a dozen weapons that can finish off your enemies at any given time, though ammo tends to become scarce over extended periods. I found that it was best to actually just use one of the five melee weapons during the opening two levels. During the beginning minute of the game, you will pick up a handgun off of the corpse of a police officer; and if you use the gun instead of the lead pipe, you most likely will run out of ammo very quickly. Having said that, once you get to the later levels, you most likely never have to use the handguns again, as they do minimal damage compared to the others.

The number of weapons in Hellforces is a nice touch, and I couldn't help but wait in anticipation until I found the next weapon. Most of the weapons have a secondary fire that has a unique ability. For example, the Walther P991A has a secondary fire that turns the gun sideways, gangster style, and fires in automatic mode. The AK 117G assault rifle, on the other hand, has a grenade launcher built into the bottom of the barrel. In its current state, Hellforces is looking sharp in the weapons department. Currently, there are five melee weapons and twelve ranged weapons, no guarantee that more won't be added before the final release however.

In the title's current state, one of the issues I noticed was the power balance of some of these weapons is a little off. When shooting zombies, that will continue to attack you even with the majority of their head blown off, is totally appropriate for an overpowered shotgun to do some serious damage; but when you walk around the slums and plug one of low-lifers in the back of the head, it takes about 2 or 3 bullets, thus the imbalance. It is quite annoying to have them turn around and shoot back at you when they should be laying face-down in the street. This also begs the question of the purpose for the silencers on some of the guns. One of the pistols in the game supports a silencer, but I found that I never used it in the game. I tended more towards using a weapon with automatic fire or just switching to melee, the gameplay mechanics are simply more geared towards action rather than stealth, and that's one of Hellforces biggest strengths.

The sound in the game is superbly demonstrated by the acoustics of a room. Any room with tiled walls causes all noises in the room to start to echo. An example was the high-pitched screams of dying zombies, as the noise seemed to echo around the room. Another nice touch is when you melee different surfaces, you get realistic scraping sounds. Try taking your lead pipe to a window, and you'll be rewarded with the nice sound of shattering glass. Unfortunately, the window glass doesn't fall to your feet, at least in this build. If you hit the frame of the window, the sound is totally different and as it should. The voice acting is superb as well and maintains the dark overtones that shroud the game itself.

As you play through the game, you'll probably find yourself taking a moment just admire the environment around you. Yes, you've probably just finished killing off a group of zombies, and yes, your adrenaline is pumping, but who can't help but stop and stargaze? One of the game's strong points is the number of different locales that have been created for the game. Whether it's the city slums, sewers, police station, or even the crypts, these are just a taste of some of the levels available. The visual effects and the game's physics engine provide a great gaming experience. Mirrors provide an accurate and clear reflection of its respective room, though your character does not appear in it. Bodies also display some very nice physics to them that make the game more realistic. For example, when navigating through the sewers I found a corpse hanging above me along a series of pipes. Just for the fun of it, you can melee or shoot him down, and be rewarded with a crumpled corpse at your feet.

In its current state, Hellforces is a very addicting game that will keep you on your toes. Buka's upcoming entry into the first-person shooter market is scheduled for release later this year, and has a lot of potential.