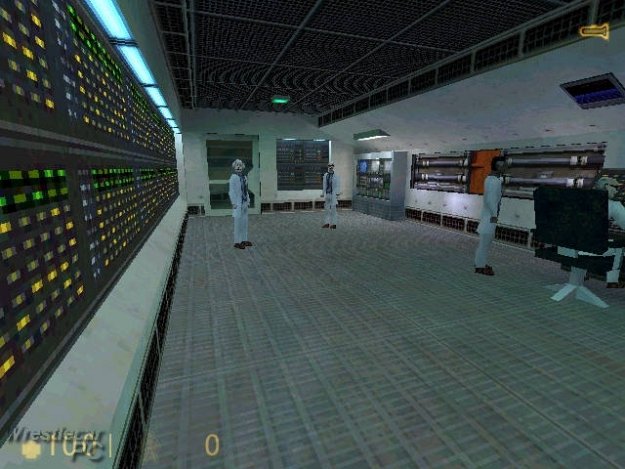 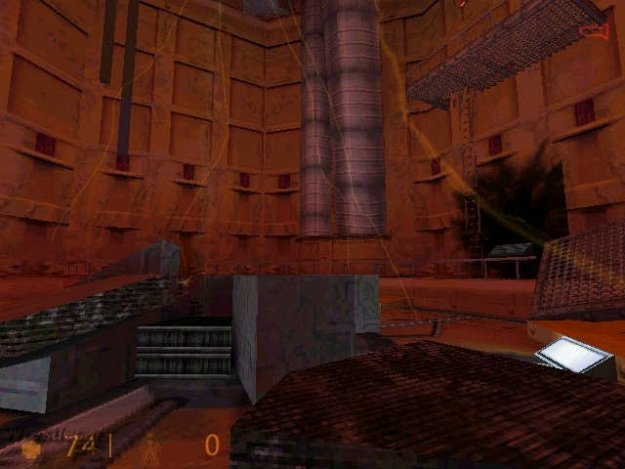 Half-Life was voted 1998 Game-of-the-Year by over 50 publications, and it has received various other awards as well.

Deep in the confines of the Black Mesa Research Facility, a top secret project results in disastrous consequences, and a portal to another dimension was accidentally opened. The entire Black Mesa facility is destroyed, with few survivors. Many of your former friends have mutated into alien slaves.

You are Gordan Freeman, a survivor of the Black Mesa accident. Caught in the middle of the destruction, you were saved by your safety suit. It is your job to escape, but with limited security clearance, and most of the access ways destroyed, you will have to fight your way out. 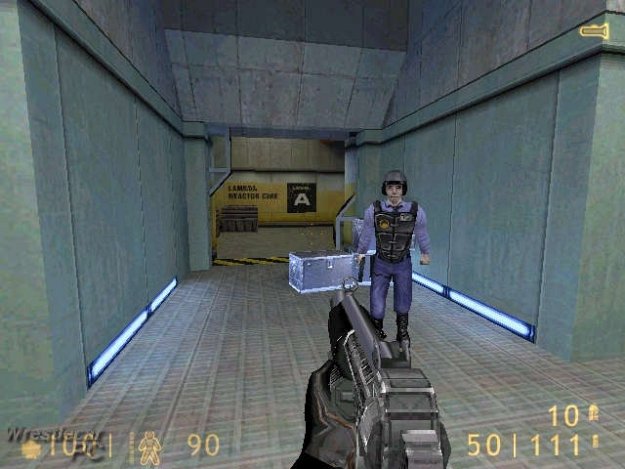 Half-Life is an action packed first person shooter, with a great storyline and very realistic characters. The thrill exists from the beginning, and players will be deeply involved with numerous storylines and lots of surprises. Players must seek out scientists and security guards to gain access to restricted areas of the Black Mesa facility, even if this includes rescuing them from dangerous situations.

Want to learn the functions of Half-Life? Well, hop into the Hazard coarse, and an automated tour guide will show you what you will need, including weapons training, tricky maneuvers, and co-operating with security guards. This is a great feature, and makes it easy for beginners to jump right into the game.

The graphics of Half-Life are indescribable. The levels are incredibly detailed, and almost everything is modeled. Even the small details, such as breaking glass and smashing the covers off vending machines have been modeled. The textures used in the levels are superb. Valve has done an outstanding job modeling the objects as well. When you hit the wooden crates, they will break into chunks of wood, and those crates filled with explosives will explode into a huge fireball. Don't want to get too close or you will end up like burnt toast. One great thing about Half-Life is a 3D Video card is not required, and because of a new technology, the game will run excellent with great framerates without a 3D video card. Although, if you have a 3D video card which supports OpenGL, Direct3D or MMX Rendering, then, the game will look extraordinary with it.

The characters in Half-Life are incredibly modeled, and their animations and movements are very realistic. The scientists and security guards move like real humans. If a security guard comes upon an alien, he will raise his gun and help you out, attempting to blow it to pieces. Many times however, they are not so lucky, and the alien will rip the guard to shreds. The movements of the military personnel are very good. They move like a solder would, quickly and deadly, carrying a load of ammunition and other supplies on their back. The aliens in the game are one of the best aspects. They come in all different shapes and sizes, and are all modeled differently. The all move in different patterns, and in different ways. Half-Life's creatures have the highest polygon count in a action game to this day. We have screenshots of the many different creatures which roam around the Black Mesa complex, which are listed at the bottom of this review.

The assortment of weapons is Half-Life is astounding. Many different types of weapons are present, including shotguns, tripmines, magnums, rocket launchers, crossbows, grenades, and many others. Each weapon has its own unique handle and sound. The rocket launcher makes the player feel as they will blow back when they fire it, and the magnum can blow through almost anything with its pure power. For the diehard Half-life fan, some other weapons are available for certain tasks. Some examples include military style turret machine guns, and the good old fashioned tank arsenal.

Half-Life also features a state of the art multiplayer feature, which allows up to 32 players to connect into a game, and fight in a battle to the death. Although to play effectively online, you may require a fast connection, as multiplayer can be rather slow.

The sound in Half-Life is one of its best features. The sounds of shells firing, and those lethal explosions are just the beginning. You know a military solder is nearby, as you will hear them contacting each other through radios. Scientists and security guards will approach and speak to you. If you get electrocuted, you will certainly know about it, as you will hear the electric current flowing through your body. The sound is one of the games strongpoints, but its best feature is is outstanding artificial intelligence. 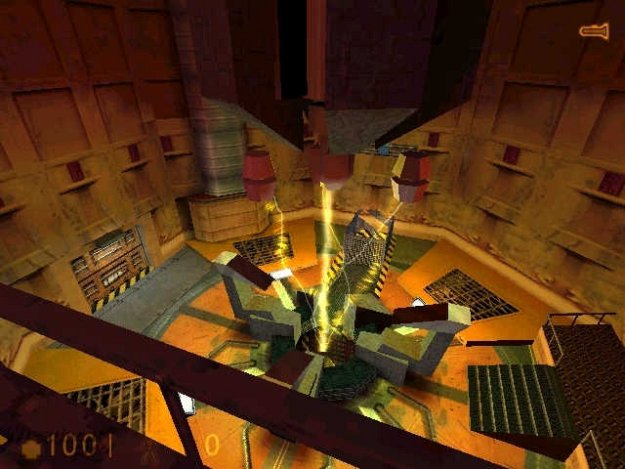 Half-Life features some of the most elaborate and realistic computer controlled opponents ever created. Throw a grenade at a soldier, and not only will they avoid it, they will unleash a grenade and a ton of ammunition back. The aliens will not give up in killing you, and no matter how fast you run, you will not escape them. The AI is fast, and will work together to destroy you. The soldiers will attack the alien slaves, and they will fight back. The battles are very realistic, and the AI can usually think faster than you. Aliens will work in packs to try and kill you, and the soldiers will call in backup if you attempt to attack them. This game is one of the best.

Overall, Half-Life is one of the most enjoyable games released to this day, and the Half-Life saga will continue to get better over time. Everything in this game is perfect, including the excellent characters and graphics, and the realistic sound effects. Half-Life is not a game, it is an adventure.