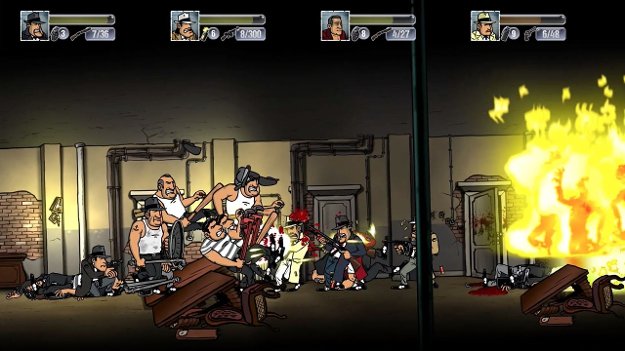 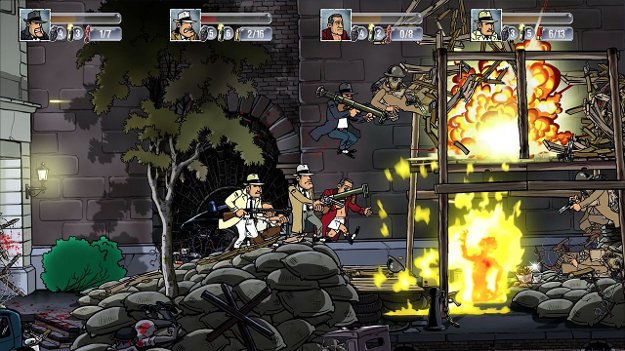 I love me a wacky game. While it’s great to have heavy storylines or a game that explores real world issues, sometimes it’s fun to just be silly. That, more than anything else, is what drew me to Guns, Gore and Cannoli. Sometimes you want to be serious and other times you just want to be a mobster mowing down hordes of zombies with a flamethrower while spouting one-liners. If you don’t know why that’s awesome then you have clearly lost your ability to feel joy.

Guns, Gore and Cannoli has a pretty basic premise - you control Vinnie, a mob enforcer who gets hired to retrieve another mobster from a nearby city. It seems simple enough until the city is found to be overrun by zombies. Not exactly one to be bothered by trifles like the army of the living dead Vinnie presses forward anyway. Unfortunately this leaves him stuck between undead hordes, hostile mobsters and even the United States Army. Because you can never have a good zombie movie without the army trying to screw over your protagonist. 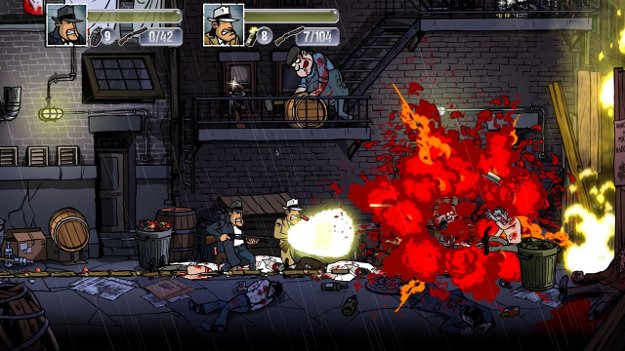 The first thing that really struck me with GG&C was the look of the game. There are very few games set in the 1920’s so that automatically gave this game a fairly unique setting to play with. But the hand-drawn graphical style of the game really makes this game a cut above the rest. Playing it I had the constant feeling that I was literally playing a gory, over the top cartoon in the vein of Metalocalypse. It makes for a great first impression that never goes away. The only weakness is that the animations are pretty stiff, almost like a flash game, but it’s all completely respectable. It may irk some of the more graphic snob types but overall it’s very effective.

Another great aspect of the game is the sound design. All of the characters have some great voice work befitting these very stereotypical Italian-American character types. When paired up with the awesome ragtime soundtrack it all really creates a great package. I don’t know that I’ve ever played a game in this time period before but this aspect of the game ensures I will always remember this one.

When I first started playing the game I felt that the game controlled kind of like a flash game. The somewhat stiff animations, the weird way they move and the somewhat floaty and loose controls all gave a fairly negative first impression. But once you start to get used to the controls, something the game does an admirable job of teaching you in the first level, it all starts to come together. It’s not as if the game designers were lazy with this, this design seems to be very purposeful. It’s simple, meshes wonderfully with the cartoon-like appearance of the game and it gets the job done. 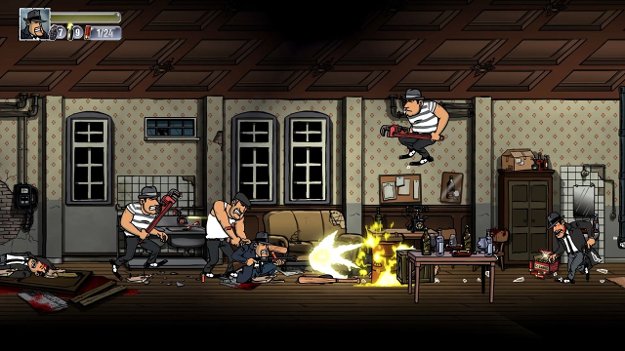 Initially all you’ll have is a pistol, your foot and the odd grenade you find but this does work pretty well. If you carefully pace your shots you can easily remove zombie heads with only three or four shots and since the pistol has infinite ammo this means you can chew through hordes with it. But as time goes on the zombies get more complicated and more dangerous. The basic zombies will always be pushovers but the advanced ones are not to be trifled with and can seriously damage you if you aren’t careful. For example charger zombies will bum rush you, destroying objects and dealing high damage while being very hard to shoot down while clearing the way for the horde. This will require you to start using the shotguns, tommy gun and military hardware like the bazooka or flamethrower to cut through the armies of head gnawers.

Things start to fall apart a little bit when you start dealing with the human enemies though. They have all of the same abilities as you so they can shoot, jump over obstacles and, more importantly, use both the kick and grenades. This starts to become a serious problem in later levels since it’s very easy to get jumped by a group of enemies with bazookas and grenades and get rapidly cut down. If you try to get clever and get in close with the shotgun it’s possible to get staggered by the humans as they kick you over and over before you can attempt to do the same to them. You’ll get a lot of use out of your longest range weapons whenever the humans are around.

So here’s a question: You’re a game developer and you have to put achievements in your game. Now your game is fairly short, totaling at about 4 hours of gameplay, and achievements are your chance to put in some sort of replay value. Giving the player a reason to play a level in a particular way to gain said achievement or trophy is always a good default when it comes to stuff like this. Now as a developer you should know your game and be able to come up with some respectable but fair challenges for the player to overcome to earn said achievements / trophies. 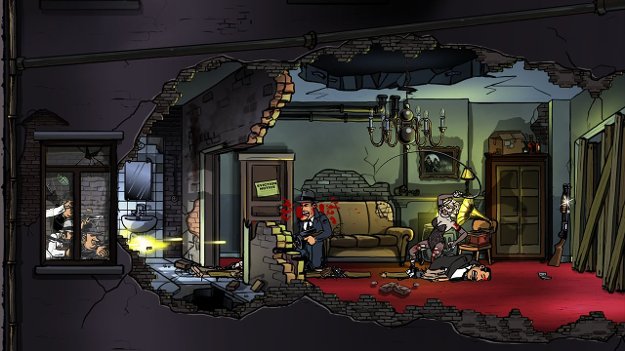 If that sounds like a simple, rather obvious thing to you well then congratulations! You’re doing better than this game is. Whenever they put in an achievement that wasn’t just for beating the game or killing bosses they made the worst decisions possible. Oh sure, beating the river level with just the magnum isn’t that bad. It’s pretty tricky and provides a heck of a challenge. Clearing out the sewers with just the double barrel shotgun is very hard, potentially impossible if you don’t know what you’re doing or aren’t careful, but it too is a rather fair challenge.

But then the game gives you the two stupidest damn achievements to go for and these reveal some pretty terrible game design aspects. You are expected to get from one end of a stage to the other without killing a single enemy for these achievements and it’s just a whole mess of garbage. As mentioned above, the zombies are not pushovers so trying to dodge, duck, dip, dive and... dodge your way through them is already a ridiculous challenge. However it would still be relatively fair since the zombies may be dangerous but they are predictable in their own way. 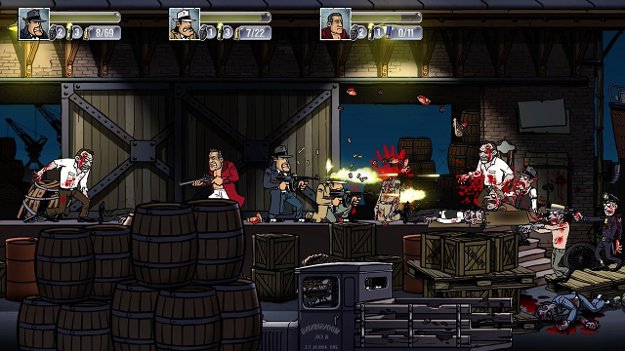 But by this point they’ve introduced the human enemies and they just make these levels miserable if you’re going for the achievements. Try to let the zombies kill them and both sides will likely go after you. Wait for your NPC companion to shoot them dead? Good luck, he’s liable to just stand there. Bring in a second local player to do the shooting while you hang back? Invalidates the achievement. Essentially all you can do is just try to push through the stage while jumping over the enemies as often as possible. This is easy with individual zombies but with large hordes it’s nigh impossible and you’ll get torn to shreds if you aren’t lucky.

The humans though, they can go suck an egg. They will almost certainly kick you when you try to rush past them, staggering you and leaving you open to being shot by all the others you ran past instead of killing. All it takes is a few slip ups like these and you’re back to the last checkpoint. That’s bad since checkpoints aren’t exactly common in this game. It tries to balance this out by giving you a full heal at each checkpoint but this doesn’t really matter much since you’re apt to die on the way there. I must have died dozens upon dozens of times trying to pass each of these stages and was pretty much spewing anger and bile by the time I was done. I didn’t feel like I’d accomplished something, I felt like I’d just gone through pure misery in video game form. And all of that was done on the easy difficulty. Ugh. 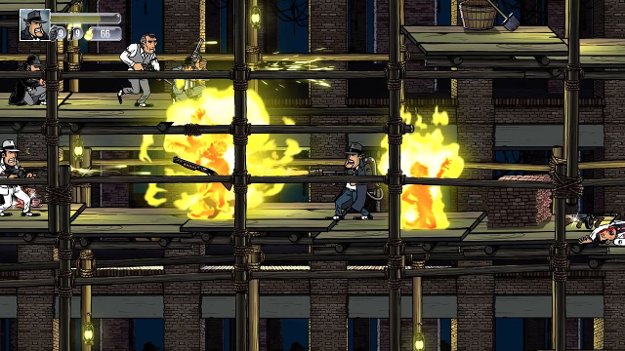 Even if you’re the sort of person not to bother with achievements or trophies these areas are still problematic since they’re just so over the top. Zombies come charging out of walls, ceilings, windows in massive hordes while humans are constantly hammering you with gunfire or explosives and your character isn’t especially durable. It gives the feeling that these levels weren’t really play tested especially since these complaints are simply keeping in mind the normal difficulty and not the higher ones. If you don’t come prepared with enough ammo for the right weapons these levels feel literally impossible on higher difficulties.

Between these design issues and the final boss, the game really just ended on a sour note for me. The extreme difficulty of these missions isn’t in a fun or challenging way, it’s just aggressively punishing and turns what should be a fun time into trial and error gameplay tinged with extreme frustration. It’s a shame to see a game with so much promise ruined by a few bad decisions. If not for these issues I would have no problem recommending this title but as it stands I have a very hard time doing so. If these issues are patched then I would happily recommend it but until then, it’s a pass.