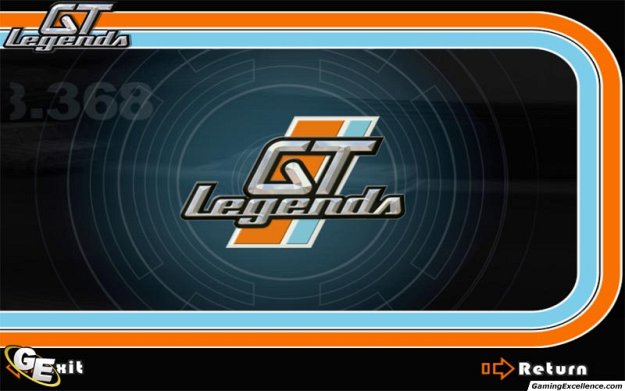 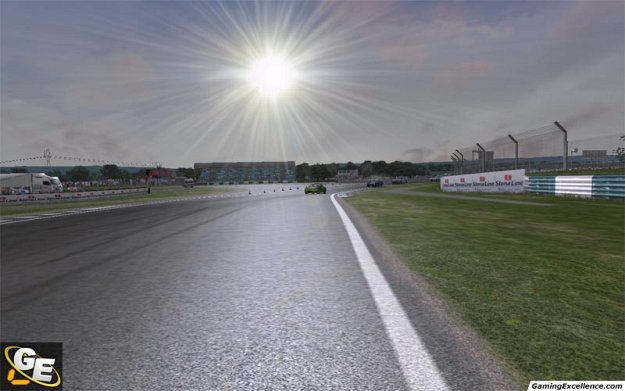 Hippies, vibrant colors, drugs, and the fast progression of auto racing were all a part of 60's history; GT Legends brings you into one of those worlds. Although a game about being able to take the biggest hit, having the grooviest style and attitude, and driving around in your bright orange and blue shaggin'-wagon would be a mind-blower of a title, sure to be sold in Wal-Mart's and Target's like hot-cakes, GT Legends' a racer, and a solid one at that.

Now, GT Legends is solid yes, but thoroughly entertaining it is not. It has all the features of a solid racer, realistic sounds and handling, detailed textures and views that look good at any angle, replays included, even up to 95 cars, 21 tracks. It has scalable adjustments to every aspect such as deceleration power and handling to tweak you're driving to suit your style, damage that blankets coverage from sparkly bumper to sparkly bumper. The things it lacks are originality, including the creation of plot, even so in simply creating a sense of accomplishment when the gold cup is in your hands. This would increase its addictiveness, replay value, and overall fun factor.

Cup challenges are the only source of structure to the game, including 23 challenges in total. These cup challenges are separated into five stages. The first of five is the "Start-up" stage, which is just an intro to the game, getting used to (or changing) the controls, the basic handling, A.I., and setting up a steering wheel (a must). As is said, it is just a start-up, and will be over with in no time. The thing that will certainly be brought to your attention without hesitation is the fact that the cup challenges are no more than a long five lap race, followed by another long five lap race, followed by... understand? These races, once completed, will result in points, which result in podium finishes (or not), which result in a cup. Lower difficulties with lower final points get a plastic cup, higher difficulties with higher points get a platinum cup. Whether you receive a plastic cup, a platinum cup, or whatever, they all do the same thing to the game, nothing. The winning of a cup proceeds the player to the next event, which simply resets the process. This process will be reset about three times each stage, making that approximately three races per event, and three events per stage (thus, approximately 60 races). Moving on to the second stage, named "60's tour cars", one would expect some form of instruction on what the cup is about, where it's located, what kind of vehicles actually fall in the 60's tour cars class, what kind of advantage one could attain with trading in your hard-attained credits for a new vehicle. There is no such instruction, and there isn't really a need, the wide car selection is almost redundant for the first quarter of the title, although once found offers big name 60's racers like Shelby Cobra, Alfa Romeo, Chevrolet Corvette, Ferrari Capris, Ford Mustang, and Lotus Cortina.

Racing is only fun if there is a sense of accomplishment, a sense of prowess, a sense of domination. The lower difficulties are pointless to those who are not strangers of the genre, and almost retain that position with those who are. The damage seems almost non-existent, as the crashes are short, the visual is minimal, and the effect is either completely redundant, or immobilizing. The latter is only true if the vehicle is overturned, which quickly will be reset, ready to rock again (or groove, if you prefer).
Thus, this accounts for very little in increasing the difficulty of the game. The A.I. is like any other racer, a little predictable, but GT Legends is very smooth at that none the less. Sometimes one can wish there would be some unforeseen A.I. crashes, corner overshoots, wall hits, or even some glitches to increase both the realism, and the distinctiveness to the title. With this wish not happening anytime soon, you can compensate for the loss in difficulty through damage by raising the level itself, simply taking into consideration that this change will mostly effect what you are racing against, and not what you are racing with (as in oneself).

The visuals are a forte in GT Legends, throwing texture and lighting to every nook and cranny. The views are far, the surfaces are textured, the dash is custom, the innards are complete, the dirt and smoke resonate, the sun shines, the flagman... well, flags! The ability and control over views and replays in GT Legends is incredible. Not only can you watch yourself in car, on the dash, or third person in rear, but you can also switch your view to another racer while still racing. The ability to use the alt keys to rotate your view and check your side mirror or to see a passing car (heaven forbid it be passing you), is a nice touch. The replay mode is easily accessible in game and has quick function keys enabled on the directional arrows to make for taking easy snapshots or even just to see that incredible crash once again, especially from other cars views. The replay only consists of your last thirty seconds though, so be sure to replay it right away. The crashes themselves are not very elaborate, and the damage induced is far from mind-blowing. As aforementioned, the texturing is almost unbeatable, especially the exterior surfaces and objects, with shading doing much of the visual play. The asphalt, trees, fencing, people, and signs seem to grab the eye every so often, always in a pleasant way. The interiors are very detailed, but not so convincingly textured, maybe because of the consistent close range viewing, but once again, the rotation of camera in car is a very cool feature, and having detail range throughout the car is superb.

If you were to fall upon the music folder in the "GTL" install folder, you would find a total of nine MP3's. These nine MP3's are to be played through menu navigation, racing, and any downtime where you leave the game sitting on. Not only is there only nine MP3's for the approximately 60 races, extra qualifying races, free modes, multiplayer, menu's, but four of them are just remixes of the original five. These nine MP3's all consist of swingin' 60's rock, which isn't the most popular of genres. So, as one would expect, the music is pretty much road kill by the time you create a profile. Lucky enough, the main reason the music folder is so accessible, and does contain MP3's is for custom user music. Just take your MP3's and throw them into the GTL music folder and away you go, kicking your own jams in a genuine 60's ride. The sounds themselves are insane, perfecting the Doppler Effect and increasing a sense of identity placed on each vehicle you purchase, watch, test drive, or race against. The detail is missing that extra punch in some spots, like clunking with damage, cheering of crowds, blowing of wind, or the large kickback on turbo downshifting. Overall, the audio is solid as long as you get your own music thrown into that music folder.

In the end, a solid game is only a solid game without a plot or purpose. Without this it loses its enjoyment, its exclusiveness, and its aficionado's. The enthusiast shall probably enjoy the 60's twist, but others should look past, as there are too many others in the genre to pass by in order to reach out for GT Legends.