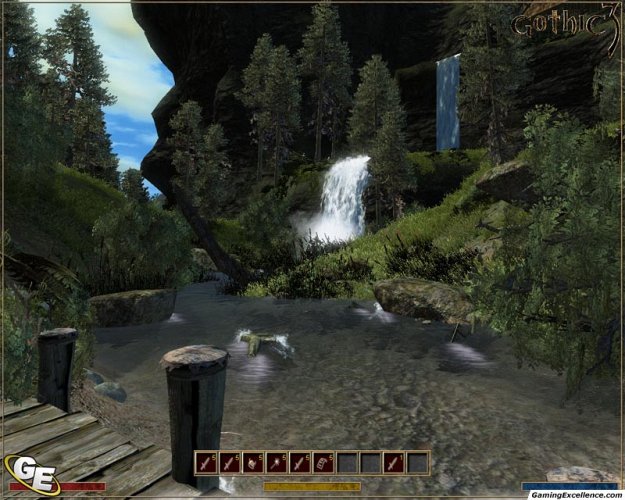 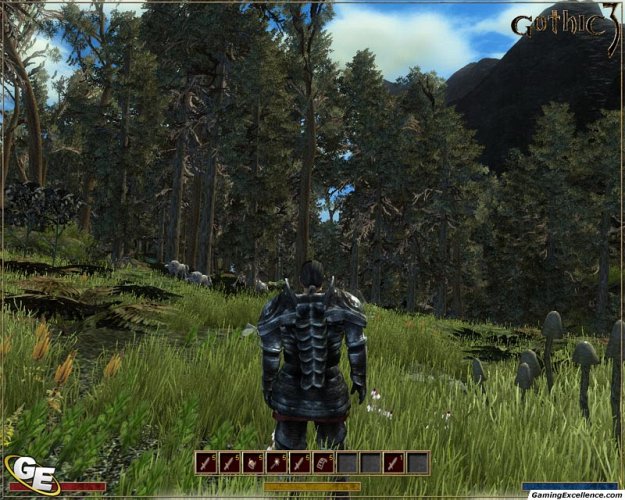 If you've played the previous two games in the Gothic series, you'll know the story up to now. The hero, who has remained nameless thus far, entered the prison Valley of the Mines with a simple mission to deliver a letter. This mission, as many simple ones seem to, spiraled into a battle to save the entire world. Eventually playing through an adventure that would take him across the entire island, the prisoner found a way off the island with a group of allies, which took him back to Myrtana, the mainland.

This is how Gothic 3 begins. The war that has raged across the land has ended, with the orcs the victor, humanity subjugated, and the remnants of a resistance spread far across the land. As you play through the game, you'll have to make choices as to whether or not you want to side with the orcs, or bring the king back to power and free the human race. The story is extremely non-linear, and while there are the 'story' quests to complete in order to advance the plot, it's possible to forget about them entirely and go about your business doing other things.

One of the defining characteristics of the Gothic series has been a vast and open world, and with each game, it seems to get bigger. Gothic 3 provides three distinctly different (and large) areas to run around: there're the sand-blasted deserts to the south, the mountainous region to the north, and the temperate region in between. Each of these areas is fairly large in themselves, and many hours can be spent in each of them, completing the quests that lie in wait. The quest log bears mentioning here, however. Since you'll be getting over a hundred quests, you'd think there'd be a good way to keep track of them. While the log does sort quests according to the city you got them in, the only indication of what you're supposed to do is the title of the quest and a bare snippet of dialogue recorded in the log. This dialogue sometimes reveals nothing about where you're supposed to go or how you're supposed to do your task, and often means hours of running around just trying to figure out where the quest-giver told you to go or accomplish.

My favorite thing about the world of Gothic 3 is that there's no distinct separation between a dungeon and the overworld map. To start, there're no loading screens between any areas, so it's just one continuous stream of land. It's entirely possible just to run around the world trying to find what kind of interesting things can be found, whether it be a small cave with a small tribe of goblins and their treasure, a hidden grove of valuable herbs, or a forgotten temple filled with riches and the undead that guard them.

There's a lot to do in the world, though it can become repetitive. In towns scattered around Myrtana, as well as throughout the countryside, you'll find people that need things done. You won't run out of things to do anytime soon. The biggest problem is that these quests are usually the same general thing. Someone will want you to go kill something, someone will want you to go find something, or someone will want you to go collect something. And possibly kill something on the way. To get anywhere in the cities, you'll need to build up reputation within them, and so you need to complete quests given to you. Unfortunately, this leads to something of a 'city-grind'. You'll enter a city, find everybody with quests, go complete said quests, and gain access to the head honcho/inner sanctum/council of leaders/whatever. Whenever you run into a new city, it feels like you're doing the same thing over again.

Anyone who has played the previous games knows that the experience and skill system in the Gothic games has never been what some may call traditional. Gothic 3 brings a new system to the mix. As you accrue experience and level up, you gain learning points. When you find the right trainers scattered throughout the land, you can use these learning points to gain useful abilities from them. The abilities, however, require certain base stats (strength, hunting, alchemy, ancient knowledge, thieving and smithing) to be at a certain level. To raise these base stats, you'll need to find the right teachers and spend learning points as well. Sometimes this involves praying to the gods themselves, and sometimes it's as simple as finding the right book to read.

There's a wide variety of skills to learn, which allows you to vary how the nameless hero will fight his battles. There's a large retinue of spells, divided first between the two gods, Innos (good) and Beliar (bad), then between various schools of magic. There's also a large amount of melee fighting skills, some ranged skills, thieving skills, smithing skills, and a miscellaneous category. Each category is related to a particular base stat. The wide range of abilities for you to learn helps greatly in being able to create a hero suited to your tastes. If you like running up to your enemies and delivering as many blows as possible, two-sword fighting might be for you, but if range is your thing, mastery of the bow or crossbow is for you. You can also learn how to use shields, smith your own weapons, brew powerful potions, sling spells, and the list continues.

Combat in the game is a very mixed bag. There's more variety than previous titles, as you can do strong attacks, weak attacks, piercing attacks, and so forth, varying your moves depending on the enemy that you're facing. Unfortunately, most of the battles can be accomplished using the standard attack move. It's entirely possible to run into a crowd of enemies, attack continuously, and never get hit. Then again, it's also possible for the enemy to get a split-second advantage, unleashing a flurry of blows that kill you far too easily. Still, when you can massacre the entire contents of a forgotten temple by pressing a single button, something is wrong.

Probably the hardest thing about making a game with this kind of scope is rooting out all the bugs and errors, and it looks like Pirahna Bytes isn't done yet. With the latest patch as of this review (1.09), I've seen enemies walk through walls, enemies forgetting to die after being ignited, my character forget to actually look like he's walking, the hero freezing in mid-jump, and that's just the ones I can think of off the top of my head.

What makes the game even harder to play is the under-optimized engine. I have a fairly new graphics card that can run most games at maximum settings without a single hitch. Gothic 3's graphics are pretty good, but I can't see them most of the time because I need to reduce settings to almost nothing, and even then the game sputters and hiccups here and there. The simple act of taking out a torch can completely stop the game for a couple seconds, and this can sometimes mean I have to reach for the quickload button yet again because an enemy happened to be near me. And just the act of teleporting back to town might mean staring at a frozen screen for a minute or so.

The audio sounds great though. The voices sound fairly bland, and the dialogue is about as deep as a wading pool, but the problems with voices are completely eclipsed by the orchestral soundtrack, which is just excellent. Whether you're in a city, in the middle of the desert, or in battle, the music that plays along is extremely well done and adds a lot to the experience.

The Gothic series has never been about following convention, and this iteration is no different. Gameplay-wise, there're a lot of things that might turn off some players, but there's a lot to go through, and a huge amount to explore. The bugginess really drags down the game, as does the stuttering, but when everything works right, technically-speaking, the game can be enjoyable. It's just a shame this happens so rarely.