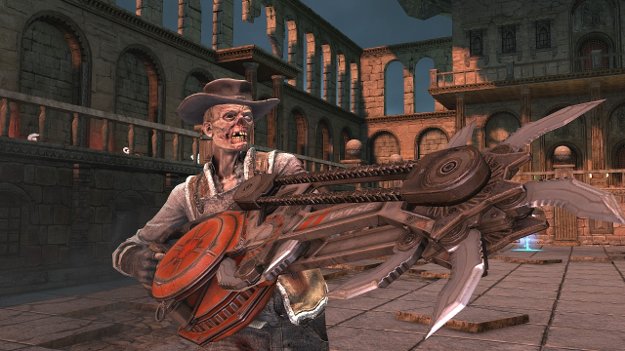 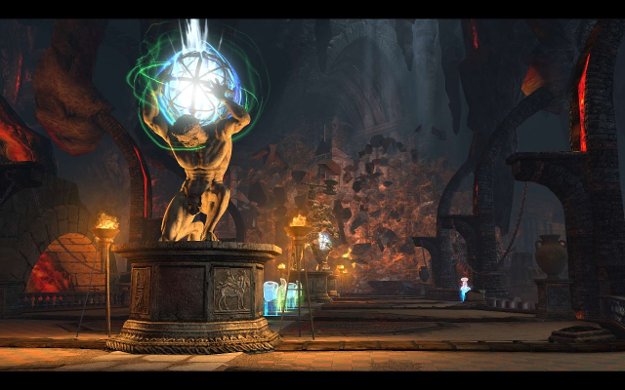 The cause for your death is immaterial. You got shot in the head, thrown in a woodchipper, ate a bad tuna casserole - it doesn't matter. What does matter is that now you're in Hades, fighting hordes of demons alongside others with striking visuals and design, but with a few problems that hinder the experience as a whole.

As a snide commentator calls you out on your mistakes, you and up to three friends will shoot everything that moves in each arena - kill everything, and you get to move on to the next arena. The combat is competent enough, but nothing to write home about. There's always something happening, always a new enemy to shoot at, and the shooting mechanics work. Character movement isn't very good, with a too-slow walk speed and a dodge maneuver that's all but useless in almost every situation. 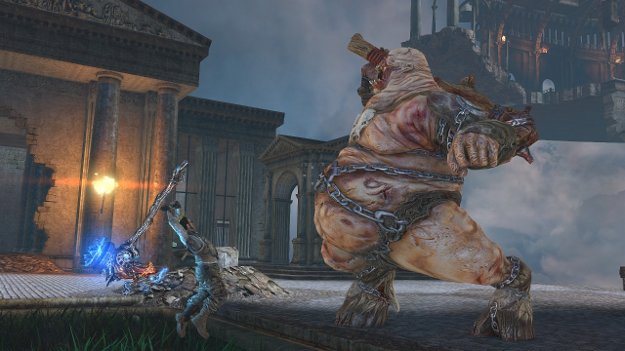 The monster and arena design are pretty top-notch, but there is a significant lack of variety: each of the arenas are really striking and varied, like a fiery pit of hell or a parthenon-esque colloseum, but there are only a few of them, and they don't change. With the number of times you'll be playing through them, they'll quickly become old hat. The enemies are the same way - each of them are unique, standing out amongst each other, but there aren't enough, though having to switch up your strategies against some of the larger monsters like cyclops or the harpy-spawning flying beasts does have its merits. Still, all the arenas share the same monsters, and they just don't have enough variety to them.

There is a little bit of variety to the battles, however, in the form of mutators that activate when you run into a new room of bad guys. These 'Tests of Faith' do a variety of things: sometimes you'll get unlimited ammo or reduced shields. Sometimes the demons of hell with wear party hats. Of these, there are quite a few, and they do add a bit of needed variety to arena combat. Similiarly, you get access to a few oaths that you can activate before combat. These hinder you by doing things like reducing your shields or what you get from ammo and shield pickups in exchange for bonuses to the money and experience you gain from combat. You also have access to special abilities, both offensive and defensive, which can also be upgraded - these help quite a bit in battles, especially when you see yourself faltering against another wave of damn fire mages. 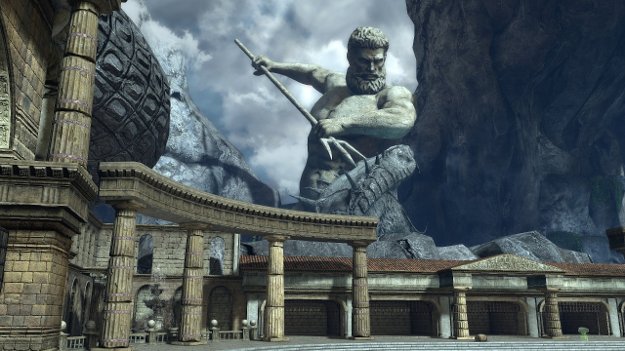 Between each battle you can spend money to purchase weapons, customizations, and upgrades that can be used mid-battle. In order to be able to purchase these, you need to be of high-enough level though, and that's a bit of a problem - it never feels like you're getting enough as you play (money and experience both). Because of this, new weapons and such never feel come fast enough, and as a result, never feel like they're worth the wait. In addition, you have a limited amount of ammo for each weapon that needs to be replenished on the battlefield, and some of the weapons that might be worth waiting for tend to have smaller clips, making it often feel like just using an upgraded version of the SMG you start with is often just as good of a choice. Add to that the fact that there's just not enough diversity in the weaponry, and what you get is an arsenal that isn't worth the wait. Oh, the customization of your character's appearance isn't swimming in variety either.

God Mode is a competent arena shooter, but just barely - and it's not something I'd recommend off-hand. What points it gets in style it loses in most every other category, and with the dearth of online shooters, there's not much point to get this one unless you've really over-played all the others. There's pizzazz over yonder in hell, but not much else.