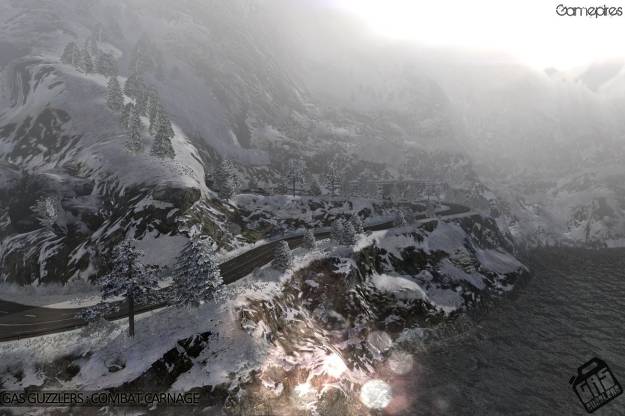 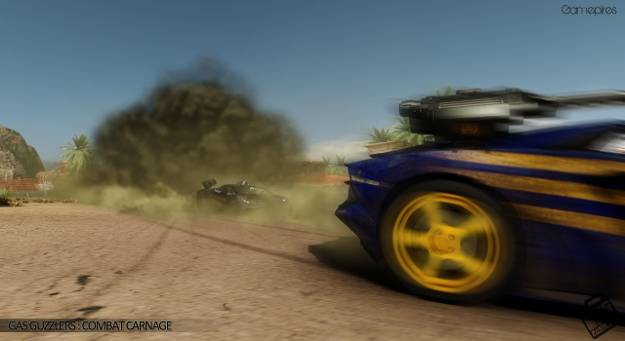 A new game development studio, Gamepires, has popped up in Croatia and their first title is joining the ranks of the vehicular combat genre. Gas Guzzlers: Combat Carnage hasn't exactly taken the gaming world by storm, and yet very much deserves its attention. The game doesn't take itself too seriously and isn't particularly original, but it's surprisingly polished for a region of Europe whose games don't often emote that particular adjective, let alone for a first title by any studio writing its own game engine from scratch.

If you hadn't figured it out from the name, Gas Guzzlers is at the opposite end of a realistic racing simulation, and they really go out of their way to make that point. First, when creating your profile, the personification of you as the driver is wobbling drunk. I'm not sure why that was necessary, given our society's strong intolerance for drunk driving, especially since it has absolutely no relevance in the game. Second, your opponents all have silly puns as names, such as "Jed I. Knight", "Perry Noid" and "Bjorn Toulouse". Third, your only choice of character voices are two variations on southern American accents. Finally and perhaps most obvious, there's giant gatling guns strapped to the roof of your car. I think I detect more than a faint hint at a parody of American backwoods racing culture, if not an outright jab. 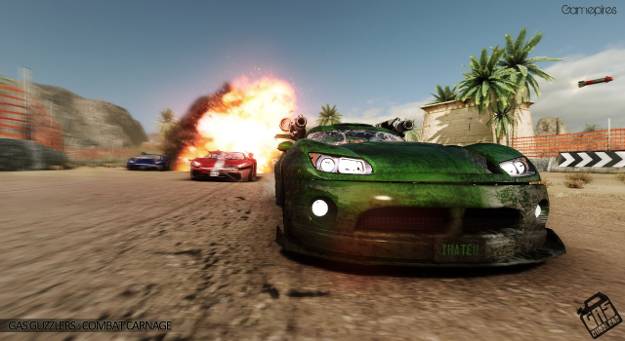 As I mentioned above, the game actually looks really good. Sure, the engine requires pretty solid hardware to run at a decent resolution and frame rate, but it's manageable and, most importantly, has virtually no weird glitches. Gamepires has only existed for about two years and their website claims this to be their own engine, so that's fairly impressive in its own right. On top of that, the interfaces are very well designed and, besides reacting to mouse input a bit oddly, work properly as well. What's more, I haven't come across the slightest translation error, which in my experience is almost never the case in eastern European games. But that's really where the plusses end with this one.

Stepping into the game itself, there are the usual "quick play", campaign and multiplayer modes. And, as you would expect, the campaign is the route to unlocking more stuff. Sadly, there's absolutely nothing more to it. They just string "quick play" tracks together without giving the player to choice of which one goes next, and the sorry excuse for career progression is a simple ranking of the player's wins amongst the 15 other NPCs. The campaign only allows the player to choose the next race mode, one of only three choices for the entirety of the game.

The three race modes aren't anything new either. In "classic races", guns aren't allowed but other weaponized pickups are still available on the track, including mines, oil spills, and smoke bombs. In "battle races", these options are supplemented with the aforementioned guns strapped to the roofs, with ammo pickups strewn about the course. The "knockout" mode is simply a battle race where the last player around each lap gets blown to bits, and the winner is the last player remaining. Yes, all three modes cycle between unlocked tracks but they'll keep cycling over the exact same ones until you stop sucking enough to unlock a new one. That means that the one track that you're (I'm) terrible at keeps coming up way too frequently. 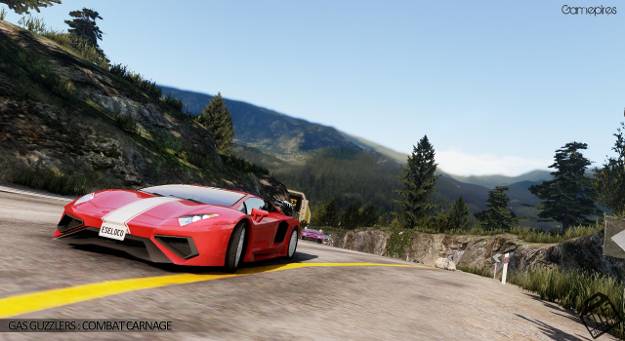 If you hadn't noticed, the core gameplay mechanic is something that's been around since the first time someone lost a video game race that was based solely on driving skill, and decided to create a game where that type of thing could be invalidated. If someone passes you, why drive better when you can just blow out their tires? All cars on the track have a "health bar", and the lower the health, the more weaponized attacks tend to blow the car off course. Running out of health is generally a bad idea for those that prefer their bodies not to be barbecued (and/or prefer not to lose), so there are incremental repair pickups strewn about as well.

The game quickly gets frustrating for a number of reasons, including the fact that the difficulty level is considerably higher than we're used to. I blame that, in part, to the ridiculous arcade-style vehicle handling that spins out the car after holding down the turn key for a fraction of a second too long. It really forces the player to drive into curves at the appropriately reduced speed and therefore occasionally release the accelerator, something that pre-teens don't often understand. One glaring oversight is that this racing game doesn't feature manual transmissions at all, so one can't even control their speed by downshifting. Combine the difficult handling with the idea that after a bit of damage, a single shotgun blast spins your car 180 degrees, and it's nearly impossible to get back in line before the game flat out decides you're so terrible that it must reset your car (about a mile back, no less).

In between races, players can upgrade and customize various features of their cars as is common in many games, including paint colour, adding decals, changing rims, etc. Upgrades to ammo, armour and weaponry all have obvious value, but I'm not sure why I'd spend some cash on engine, brake and tire upgrades when the handling has such an arcade feel anyway? At least it's not one of those tuner games where I'm presented with 50 brands of the exact same thing -- Gas Guzzlers keeps the choices simple. 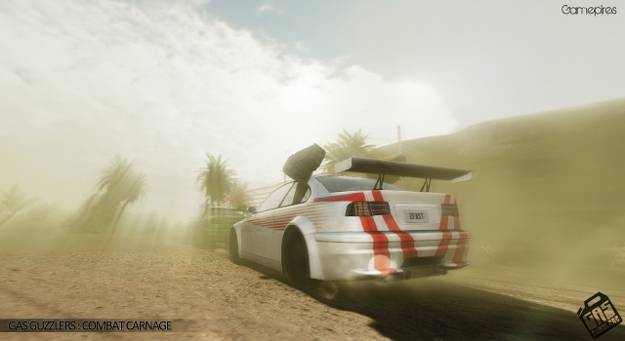 If I didn't make my point obvious by now, there's a tremendous lack of innovation in this game. In fact, I'm convinced that I've seen every single feature and idea in another title, some going back 15+ years. What's worse is that the game assumes that the gameplay elements will keep you interested in between unlocked upgrades, and it really doesn't. While there are just over a dozen different cars in this game, but you'll be bored stiff by the time you unlock the third. One would think that guns might be a key unlockable, but there are only four in the entire game! I hope you like those dual-mounted shotguns because you'll be sticking with them for a long while.

If nothing else, this game is solid proof that nobody wants to play the same game twice. I'll very much applaud the effort and the execution, but the bottom line is that there's no fun to be had in this title, unless you're so new to the genre that you've never played any of the games that actually came up with those concepts in the first place. Still, if this game stays off of everyone's radar, one should keep an eye on Gamepires' next project... and if you're one of its developers, please give us something new next time.