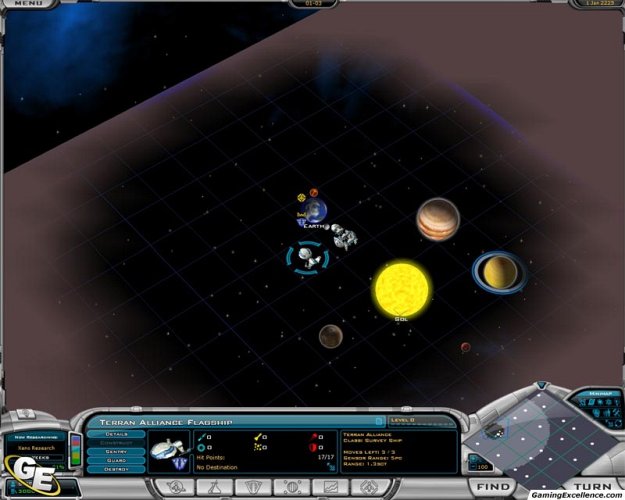 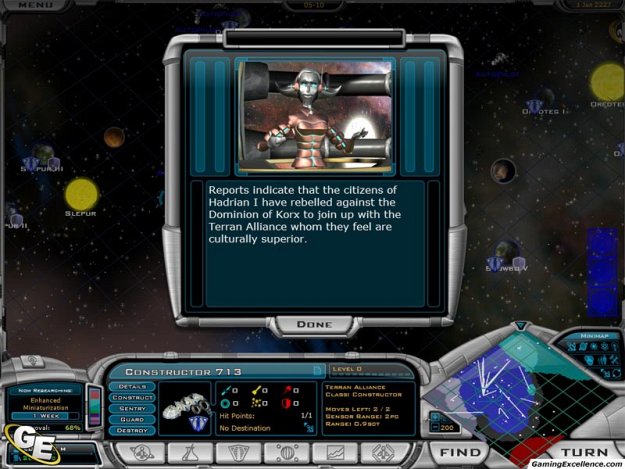 The original Galactic Civilizations computer game is one of Stardock's most successful to date, and was later followed up with an expansion called Altarian Prophecies. Galactic Civilizations 2 takes the original game and completely revamps the graphics engine, and adds a few additional tweaks into the gameplay which turns this newest series addition into a hard-core strategy game that gamers should consider looking into.

The campaign mode picks up at a point in the near future from where the original game left off. In the original you played as the humans who had just developed the technology to travel between worlds. This campaign starts off by having the player chase after a device that was left behind by the Precursors, an ancient alien race, whilst in the middle of a civil war suddenly fell off of the face of the universe. Unfortunately, the evil Drengin Empire has the jump on you, and throughout most of the early missions you are chasing after them and taking over worlds that hold clues to the final location of the device. In these early missions and throughout the campaign, your Altarian allies as well as other good-willed civilizations, will aid you in your struggle against the Drengin Empire.

The campaign is not one of the most appealing aspects of the game, because once you finish a stage, you'll most likely never want to play it again. The replay factor is non-existent because it is played in the same fashion as the custom made games. Each level starts the player off with a single planet as well as a colony ship and survey ship; the goals are typically to eliminate the opposition, or to complete a more specific objective. In the end, it tends to turn into a race to control more planets than your enemies, and to be the leader on the research tree. So while playing the campaign is fun, it is very difficult to have the same enjoyment factor when playing multiple stages in a row. I found that I was getting more satisfaction from playing a single custom game where I could set settings to my personal tastes

Galactic Civilizations 2 is a space strategy that lets the player choose a civilization from a list of races and then, through the colonizing of planets, start to grow your economy, social and military production, and eventually attempt to win by achieving one of four victory scenarios. The gamer can choose one of twelve playable races, and is also given the option to create their own customizable race. Each race comes with its own special abilities that can affect areas such as the strength of your weapons or your civilization loyalty rating. An additional feature is the ability to change not only the customizable race's features, but also that of any other species. The player can change anything from the name of their home planet, to the color of their ships engines. The only catch is that only the starting technologies for the customizable civilization can be changed. Compared to the original game where only the humans were a playable race, this newest release allows the user to choose any of the available races. The campaign is played from the human perspective, but all custom games are completely open-ended.

Each custom game allows the user to edit their race, as well as the map settings, the winning conditions, and the intelligence and number of alien races. The map settings that can be changed include the number of stars, planets, and "habitable" planets. The numbering system is not governed by actual numbers, but by the probability of encountering them on the map. This probability has a range of Rare to Abundant settings, and is primarily governed by the size of the map. The winning conditions are set on the same interface for the map settings. The three winning conditions that can be turned on and off are as follows; a political victory involves the player having created alliances with every major alien race in the galaxy, the cultural victory is achieved by having influence in over 75% of the galaxy and the research victory is achieved by researching the final tech in the research tree. There is also a fourth victory condition that is one that almost does not need to be mentioned and is definitely not an option to turn on and off; eliminate all of the major alien races and you'll take control of the galaxy and win a domination victory.

Another setting that can be changed before starting is the intelligence levels for each race individually, as well as how many of them there are on the map. There are many intelligence levels to choose from and the developers have done a good job in creating an AI that will react accordingly. One of the neat features is that the AI will notice when you start to amass combat ships and troop ships within their borders and alongside their planets. On the normal difficulty level, the AI will simply inform the player that they notice your actions, but will not react to you in a hostile way. However, if you have decided to set the difficulty to intelligent or higher, foreign powers won't just sit around and let you take over their planets in one turn. They won't play dumb. The ability to change the number of races independently to the size and star density of the galaxy allows for the creation of some interesting custom maps. One of my favorite settings is to play a tiny galaxy setting with a rare number of stars with about eight other major races. This creates only one or two other stars with planets available for colonization. Hence, the first couple of turns end up being a race to colonizing the most habitable planets. With these settings you are able to control a majority of the planets before no more become available, then it is simply a matter of staying ahead of the pack and managing your resources, before victory is assured.

The graphics engine for Galactic Civilizations 2 has been totally revamped and has completely been transferred from 2D to a 3D galaxy map. Every single object on the map is now a 3d model and lets the map zoom in for a close-up view of the ships, to zooming out to get a better idea of the galactic power distribution among races. The level of detail that was given to the ship model is especially noticeable when creating customized models. Each model gives a multitude of different red points where you can attach engines, weapons, defenses, internal system, or simply decorative structures. This vast number of models gives the user almost unlimited creativity when designing their own ships. Another strong point is the addition of combat view mode when two fleets of starships are engaged in battle. In this mode, the player can see their fleet duke it out with the enemy. This view is also included for ground assault by displaying the land battle as two armies approaching each other with the size of each army depicted by the number of ships involved. The weak area that I found in the game was the quality of the CGI introduction videos, along with the ending victory movies. Compared to those of the first game, I found them to be fairly bland and didn't give any real sense of accomplishment.

One of the major disappointments I had with the audio quality of Galactic Civilizations 2 was the removal of the customizable song playlist. The original game provided a simple folder in the directory where the user could drag and drop MP3 files. When the game was loaded up and the custom playlist button was selected in the options menu, the player could have his or her music be played in the background instead of the original score. However the overall musical score has been drastically improved and is rather enjoyable to listen to. There are also plenty of different audio tracks to cover the vast number of weapon technologies. The weapon technology tree is split into three types, laser based, projectile based, and missile based, each with a vast list of tech levels. Each level has new graphics, but also new sound files. This depth only adds to the gameplay experience.

The gameplay for Galactic Civilizations 2 is designed around a user-customized galaxy that gives the player as much creative power as possible. While a human campaign mode is included, its replayability factor is extremely low when a custom game is much more preferred. A positive point is the ability to keep track of the game stats on Stardock's Metaverse. Overall, each custom map can be managed to the player's personal taste in order to produce either a long or short single game. While the learning curve is steep, and the tutorial is not overall that useful, thereby making it difficult for those who have never played the previous game to simply pick it up and play it. So while Galactic Civilizations 2 does provide a refreshing experience in the art of strategy gaming, it is a very difficult game to master and takes plenty of time and dedication early on.

To summarize, Galactic Civilizations 2 is an impressive game that contains plenty of content and inventive turn-based gameplay mechanics; however it suffers from an extremely steep learning curve for beginners, and lacks a captivating single player campaign. Galactic Civilization 2 is definitely worth, though its long-term appeal falls a little short.