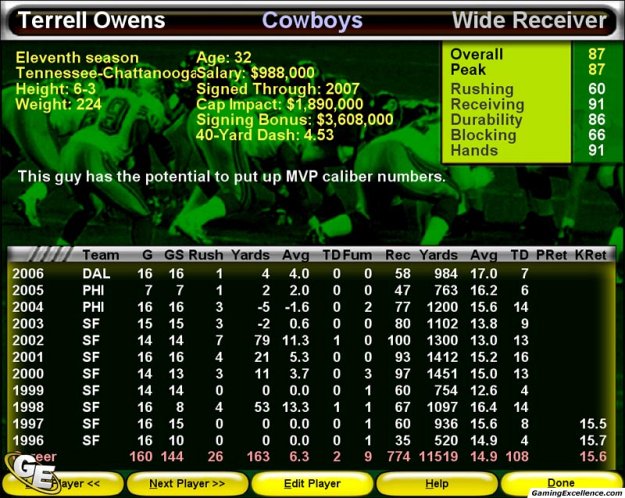 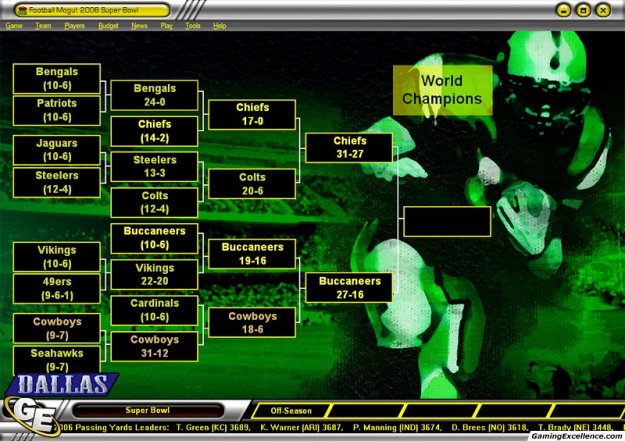 Like many other football fans, I love my stats. Sure when friends are over it's nice to take the action onto the actual playing field, but when I'm alone with most football games, I like to spend more time with the numbers. It might sound odd, but the numbers are generally the most compelling point of football to me and anyone who's seen a Monday Night game knows that if it wasn't for statistics, there sometimes wouldn't be a point to watching certain games: "Well football fans, it's well documented that Tom Brady has never lost a Monday night's game against the Colts following a Sunday night's sirloin steak diner, eaten at a restaurant beginning with a vowel preceded by a game of dominoes in which he won 5 out of 9 times facing an opponent who's age was divisible by 3 and who's mother's sister's maiden name began with a consonant. Well, I spoke to Tom and he said he really liked his steak diner, so we'll just have to sit back and see if the Sirloin Curse is going to cripple the Colts again here tonight!" You get the point. And while far-fetched, this is what makes each game interesting; the stats and the projected numbers. And so, here we have a budget title by Enlight Software (makers of the very good Baseball Mogul 2007 game) which tries to give fans the real meat of football. Unfortunately, the game will seem far too unintuitive for those who don't already know the ins and outs of the sport and far too tedious and frustrating to those hardcore fans who want depth and playability in one package.

I understand budget pricing and the concessions a game must make to attain that. While FM2007 uses the names of NFL teams, with the players and their stats, that's where the line is drawn. FM2007 is not a licensed NFL product and as such, don't expect pictures of players, team logos or NFL Films music in here. The game is all text based and follows the green, yellow and brown color scheme regardless of the team you're managing. There is no music anywhere and no sound effects either. Make the first down; nothing. Lose the snap and take a giant yardage loss; nothing. Win the game, lose the game, turnover on downs, field goal successful, it doesn't matter. The text color and font stay the same and there are no audio cues to let you know what's going on. I don't mean a 60 piece orchestra should've been commissioned the write a symphony for each instance, but a wave file with someone saying "Yeah!" or "Damn!" or "DING!" would've helped the experience greatly.

As it is, you begin the game faced with an imposing choice of drop-down menus and not much in the way of help. You'll eventually pick a team (the Rams in my case) and figure out through trial and error what you can do. While this is a football game, it seems to cater more to a business management/player management philosophy which can greatly please some, but which will irritate others. Once you do figure out how to run your season, you'll have to figure out if you want to sim all your games of play them out. A word of warning; depending on the screen you're on, choosing to simulate a week can also simulate your team's game without your consent while other screens will prompt you if you want to play/simulate them. Also, don't look for pre-season games, there are none.

If you chose to sim all you games, you'll basically be back to the business/player management aspect. Surprisingly, these modes, while still unintuitive, are very deep and offer lots of options. It's not always clear what everything does, but it's fun to play around with them. If you choose to play the games you'll play as the "head coach" and call every play. Kickoffs generally have four play options while offense/defense has a few screens worth (ten plays per screen) of positional/situational packages. The choices however are not very varied and it soon becomes obvious that the ball running plays are broken and passing is sometimes too easy. Also, the plays feel a little generic and it's insulting a little to see such a tiny offensive playbook for a team like the Rams. You also have to pick your plays without knowing what the defense will run and once picked, you can't audible at the line. While you can see what the defense has picked, you're respective plays are displayed on opposite sides of the screen and you have to mentally picture the match-ups by superimposing them in your head. Kind of annoying. And don't try to manage the clock either; besides calling a timeout it's impossible to really work the last to minutes of each half. Sure players seem to run out of bounds but that's not always the desired situation.

A special mention should also be made of the numerous bugs encountered in this game. First off, when you're about to make dire decisions, it would be nice to get prompted just to make sure it's really what I want to do. In the least, it'll let me realize that my actions have consequences. Secondly, if you are playing a game, don't try to save it. You'll be told that you can't save a game in the middle of a simulation week (even though you're playing the game out yourself) and when you close the message prompt, the game will be over and you'll be looking at the team stats page. What? If I can't save my game, that's fine, but why do I have to be punished by having the mindless computer finish my game for me? And lose in most cases! If this wasn't enough, the game has a tendency to crash unexpectedly and if you navigate through the menus, you'll eventually realize that there's no "home'" button that brings you back to the desired team screen.