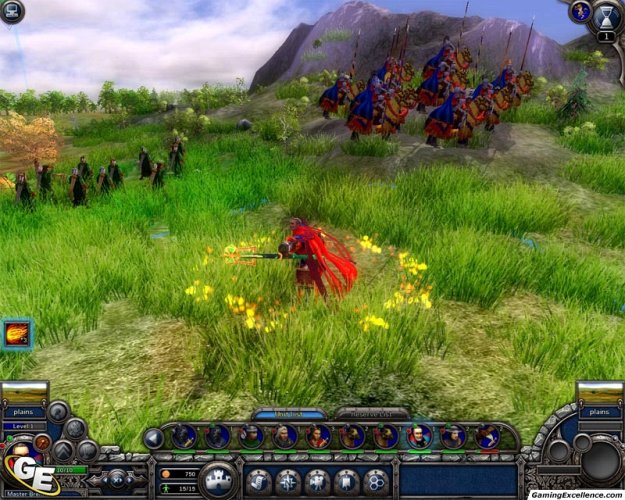 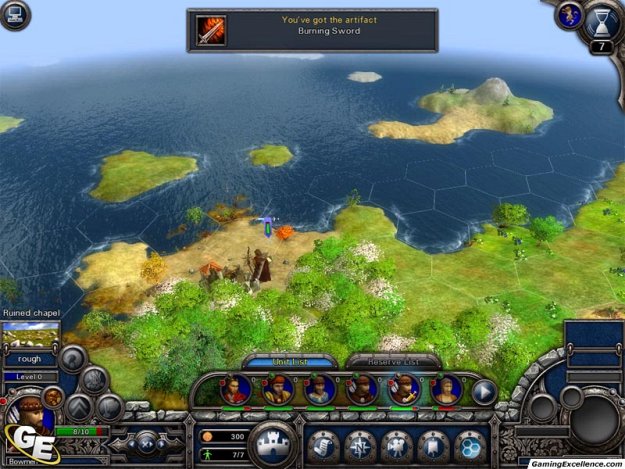 At first, the forefront of Fantasy Wars will seem familiar; Humans, Orcs and Elves are all pretty ticked off at each other and are at war. While this has been done before, developers 1C and Ino-Co, and publisher Atari, do well to include a lot of background story that distinguishes the plot from any other. Whether the story engages its audience or not, the turn-based, hexagonal playing-board style that the game possesses certainly will. Without jumping through too many hoops, Fantasy Wars manages to take a familiar war and breathe some life into it.

The welcoming menu screen of Fantasy Wars is pretty standard, allowing the player to choose from starting a single mission or a campaign, as well as a multi-player game or the tutorial. While the multiplayer mode is lacking (playing against someone else requires either a LAN connection or utilizing the musical chairs concept), the campaign or single mission choices will get you right into the action without much fuss. At the beginning of the game, players can choose from the Human and Orc campaigns, the Elven campaign remaining locked until the previous two have been completed.

Once a campaign has been chosen and the game has begun, Fantasy Wars begins to deliver its addictive gameplay elements. For starters, the entire field for each level is covered in a hexagonal grid; pointing and clicking inside the hexagons will move your units to and fro. Albeit not completely revolutionary, the map's grid provides a clear interface for determining troop placement and movement. As you conquer towns and slay their occupants, gold will kindly deposit itself into your toolbar, which you can then use to purchase new units and upgrades for existing characters. Although simply buying new units is tempting, the game's difficulty stresses the importance of utilizing the available advancements rather than plopping down a huge array of troops.

Another key feature of Fantasy Wars is its use of land abilities. Each different unit has a type of land on which it can defend or attack better, and a type on which it fights poorly. While it can be a tad annoying at first to cycle through each of the units abilities, it will become second nature as the game progresses. To lead these units into battle, heroes will be picked up and added to the party along the way. Unlike other units, when heroes die on the game field, they are replenished on the next map of the campaign. As you progress through the game, artifacts can be acquired that place specific bonuses on heroes and troops - where heroes can carry three of these, basic units can only carry one. This adds a lot of replay and strategy to a game that already has enough of both elements.

The in-game visuals prevalent throughout Fantasy Wars are clean-cut and the various units act like they have life rather than being stiff game-pieces. Zooming in on battles is worthwhile, as the miniature actions that take place are entertaining to watch. Despite the appropriateness of the generic hack-and-slash sound effects and movements that prevail in battle, the cut-scenes drag the game down with their inflexible animations and horrendous voice acting. There is nothing worse than listening to a voice actor straining and cracking his way through a poor goblin impression. More often than not, the player will be reduced to silencing or skipping these scenes all-together, and they do not add much to the actual gameplay to begin with.

The sound and visuals may be lacking a bit, but controlling a wide-scope battle has never been easier. As noted before, moving across the board is as simple as clicking the mouse a few times, and the general interface is easily viewed and readily accessible. Finding information on units requires only a right-click, and the clickable spells and buffs for each unit are listed on the left side of the screen for swift access. Although the game is turn-based and does not require too much reflex action, the simple interface is a welcome aspect. Commanding troops on multiple fronts and the like is only made easier by the game's polished and fluent control options.

While Fantasy Wars may not set any new records or break the gameplay barrier, it is a solid turn-based war game with an addictive twist. Whether your cup of tea is trampling Humans or flinging arrows at Elven defenses, this game has what you want and more. Even with its utilization of a simple premise and an even easier interface, Fantasy Wars is a challenging adventure that requires patience and a knack for strategizing unit placement, while still allowing new players to free their inner commander. Start bashing some fantasy creatures, already.