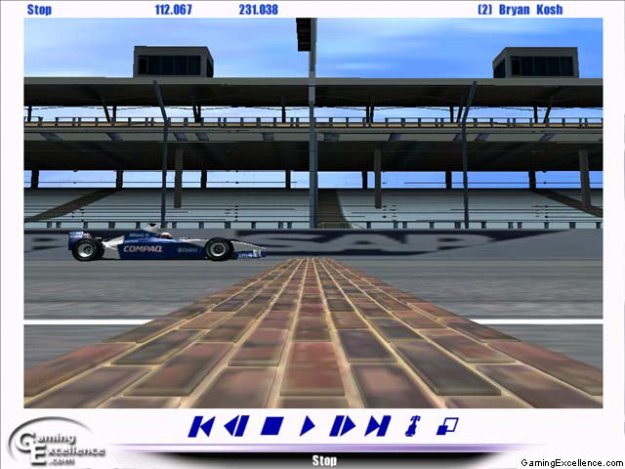 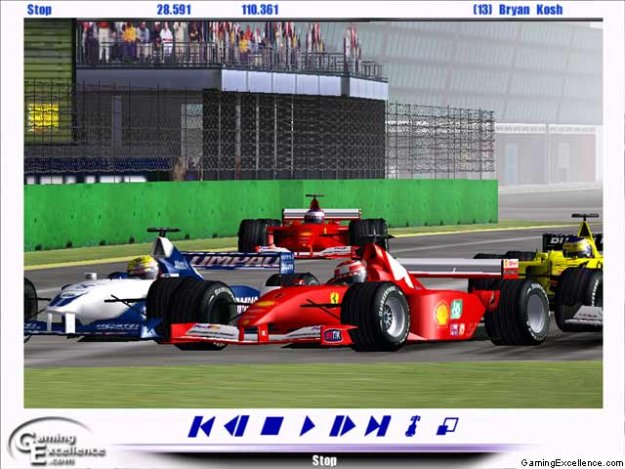 EA Sports has been known for developing several very poor racing games in the past, examples include NASCAR Revolution some of their previous F1 games. However, F1 2001 does not follow this trend, it is without a doubt the the best ever F1 game I have ever played. What originally caught my eye with F1 2001 was the graphics shown on the back of the box. Although a little skeptical at first considering it was an EA racing game, but I was proven wrong with F1 2001.

This game was very well developed. Although it is a resource hog, it runs smooth and clean with near minimum system requirements. The minimum requirements for the game are Pentium II, 333 MHz processor, although you will need a much more powerful system to enjoy this game to the fullest extent.

The AI presented in F1 2001 is one of the best models I've seen in any in any F1 simulation to date. They can be very challenging to compete against, especially down the straights when they try to draft by you. Depending on the AI strength and aggression settings selected, they will race you hard and make you fight for position on the track. When they try passing through the turns, they give room but just so much to where you have to work for the spot. I noticed one problem with the AI; that they will perform a "kamikaze" pass on the start of the race, and just fly down the straight while others will slow down and make the turn. The cars can bump together like in NASCAR racing, and often will not crash or receive damage which is unrealistic in F1. AI is and will never be perfect, but this is the best I've ever seen thus far.

EA has done a solid job on the physics model in F1 2001. The cars react to every bump and crack in the track. If a car gets into the grass, you will experience a complete loss of traction, good luck in preventing a wreck. The cars are very touchy and can spin easily if you don't "feather" the throttle off the corners. If you get damage with an F1 car, your day is pretty much done, as it will affect the car to the point that it is un-drivable. If you loose the front wing in an accident, the car becomes extremely tight and will hardly turn in the corners. If the rear wing is lost, the car becomes very "loose" and will spin very easily. Knowledge of F1 cars is very beneficial when playing the game, as the car setup needs to be tweaked to toward your driving style to be competitive. If you like using the bumpers through the turns, you must prepare the setup to react to minimize the loss of speed and prevent a wreck. Another feature that makes this game extremely realistic is the head up display (HUD) on the steering wheel. The buttons on a wheel or joystick can be programmed to switch to different screens, such as damage monitors, pit stop status, lap times, or intervals between drivers. Many different assistants that help you control the car are included in F1 2001, including but not limited to steering assistance, stability control, and spin correction. There is even an invulnerability assistance that prevents you from getting damage from a wall or hitting another car. Some cars, even the player car, can breakdown before the race begins and will not move from the grid, forcing other drivers have to dodge the obstacle.

There are many different single player modes included in F1 2001; some examples include Quick Race, Grand Prix, Testing, Championship, and a really cool feature I've never previously seen in a racing game, the Driving School. In Quick Race, you just pick a driver, pick a track, and race. No practice. No Qualifying. Just go out and race. You start the race where the driver selected started the race in the 2001 F1 season. The Grand Prix mode is very similar to the quick race; the only difference is that you go through the four practice sessions, qualifying, and warm-up before the actual race. This type of single player is for the more experienced F1 fan, but lacking the time for a championship. In testing, you are given the option of racing the track alone, or heading out with other teams to get the feel of the track, and work with those all-important setups. Championship is for the more hardcore F1 fan; players will follow the 2001 season. You can modify almost anything with the championship mode, such as tire wear, fuel consumption, and car breakdowns to accommodate the length of the race selected. You can also decide to turn yellow flags on or off, and specify the number of AI drivers in which to compete against. For the real beginner to F1 racing, or anyone just wanting to practice their lines and learn the courses, there is the driving school mode. The primary objective to this mode is to help people learn to race the tracks, and not the other drivers. Players will learn how to approach a track, and drive it safely without cutting through the grass. To make this aspect of the game even more helpful, each track and split sections of the tracks are divided into "sectors". You have to drive through these sectors in an allotted time to receive Gold, Silver or Bronze medals respectively, and if you don't meet the minimum time, you are forced to repeat the trial. These trials can be extremely difficult, as the driving aids are turned off, and you are forced to "race the track." Even though the driving assistance is disabled, the developers help you out by providing a "preferred line" on the track. When the line is green, it means you should be on the throttle and accelerating though that part of the track. White lines inform the driver to remain off the throttle, usually when going through a corner. When you come approach a red line, it indicates that you should be braking at that spot on the track. Points on the track where players should begin accelerating and braking are also indicated.

The multiplayer aspect of F1 2001 is very disappointing, as no "buddy system" is included. The only way to race other competitors is to either start a LAN race or know the IP address of the host you are racing with. Hopefully, EA will at least have a lobby type environment for some good fun person-to-person racing in F1 2002, but until then, this aspect of the title is greatly lacking.

The options available for modification in F1 2001 are very through and nearly everything can be changed to suit your preferences. The AI parameters can be adjusted by setting the aggression and strength, which determines how they will drive when near the player. The occurrences of random breakdowns can be adjusted, as can the amount of tire wear and fuel consumption for each vehicle. Driving controls can be completely adjusted, as can the controls to specify the heads up display. Like any other game, the graphical abilities can be customized, with the text appearing in red if it is not supported in your system.

The sound in this game is extremly well done, unfortunately a few important sound effects have been left out. With surround sound speakers, you can really feel the excitement of waiting for those red lights to go off at the start; the sound effects get your adrenaline pumping. The crowd on the other hand is somewhat disappointing, mainly because the crowd can be clearly heard at some tracks, but while driving by at 220MPH on other tracks, it seems as if you are in a ghost town. When you do hear the crowd, it's like you are sitting in the grandstands, bullhorns blaring and everything you would expect hear at a real F1 race. The engine sounds are very well recorded as the difference can be clearly heard while up-shifting, downshifting, high gearing, and when something goes sour in the engine. Another disappointment with the sound effects are when in the pits and the crew is completing a stop, the crew cannot be heard adding fuel or changing tires.

One large problem with this title is the lack of support for newer video drivers. If newer drivers are used for the video card, the graphics become distorted and the game is unplayable. The replay feature becomes un-usable, and the driving school aspect becomes extremely "colorful", not in a good sense. The cars are very well designed and look near exact, main and associate sponsors placed all over them. For tracks, it is the best modeling I have ever seen. The reflections from the glass buildings are remarkably realistic, and the tracks are full of bumps and cracks. The environmental and vehicle textures are highly detailed, even when using lower resolutions.

This is without a doubt, the best racing game EA has ever produced. In my opinion, F1 2001 beats Grand Prix 3 hands down. The only real big disappointments of the game are the crowd sound effects, newer video driver bugs, and the damage model. Other than these issues, F1 2001 is a success by the developers at EA.