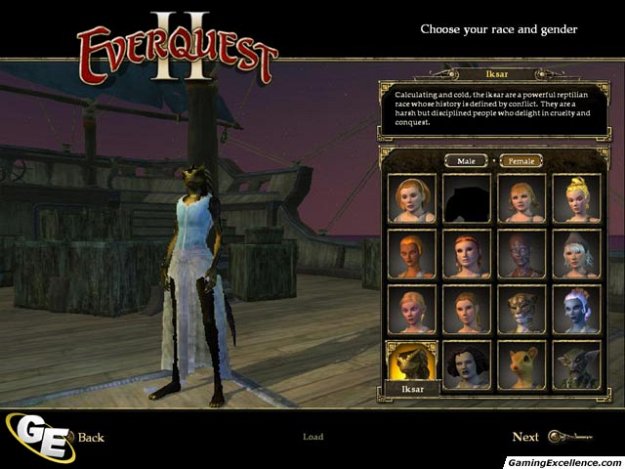 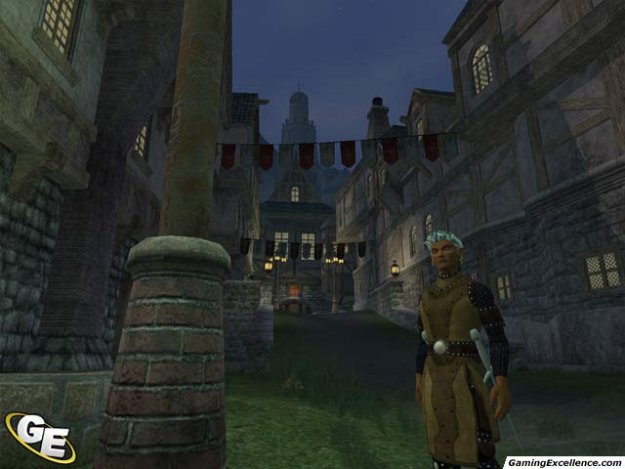 Massively multiplayer online role-playing are no doubt by their nature very immersive, time consuming, and sometimes truly addictive monsters. The time, money, and effort some players devote to these types of games would awe and confuse many. EverQuest is a title sometimes referred to "Evercrack", as it is by far one of the most addictive games ever produced. This game was revolutionary for RPG's, and continues to be a strong title to this day. It is easily one of this first well made, and most successful massively multiplayer online games, bringing together thousands of both beginners and RPG experts alike. By combining their strengths and strategies together to overcome greater powers, gain experience and pick up the "phat loot", Sony Online Entertainment has no doubt done a great job. They have now released a follow-up to this game, EverQuest II, but can it live up the high expectations set by its predecessor?

The EverQuest II log in system is quite an improvement from the original. It is much easier on the eyes and the options were seemingly placed for easier use. One thing that caught my eye here was the new "parental controls" options. It is a smart move on SOE's part to implement such a feature. This parental controls option is an integrated program that allows the parents to set available days and times for access to the game, to limit the amount of time that can be spend in the world of Norrath. I was again impressed after the initial login. Creating characters has never been so easy, and the amount of detail that can be added is greatly improved. Nearly every aspect can be customized, skin tone, hair color, hairstyle, eye color, nose length, and that's just for starters. It is amazing how different you can make any two characters of the same race look, just an example of the level of detail available in EverQuest II.

The sound system implemented in EverQuest II gives a whole new feel to the series. As an experienced EverQuest player, I personally really did not like the non-player characters (NPC) actually speaking to me. Although the concept is good, I would much rather just read their speech than listen to them speak. In fact, I ended up disabling the sound as it became quite repetitive and became quite annoying, along with the other in-game sounds. The background music is adequate, but is no real improvement from the original.

For anyone familiar with the first, the class selection in EverQuest II is very different. Unlike the original, you do not select a class type for your character until you've completed a trip to Refuge Isle. This beginner area allows players to learn the ropes of the game and get an introduction into the world of Norrath. This option allows players to get a more in-depth selection of what type of character they want to become as they progress throughout the game. Character development is key in this type of game, and players will grow and expand their character as they explore the world of Norrath, one of the most addictive elements of the EverQuest series.

After having a very positive experience up until launching the title, I was really disappointed to actually start exploring the world of Norrath. Even with a fairly decent computer system, the game is simply unplayable on maximum graphical settings, as to be expected. However, after turning the graphics down to a neutral level between quality and performance, the overall quality is mediocre at best. Sure, the game may look outstanding on the highest detail, but the average gamer simply can't afford top of the line hardware to play a game. At the actual level where the game is balanced between performance and quality, the only improvement in the graphics from the original are the spell effects. The spells in EverQuest II are really quite nice, however the character models in game actually seem better in the original. In EverQuest II, the graphics aren't smooth, none of the models were crisp, and had a lot of "jagged" edges on the graphical level that is actually playable. For a few minutes, I felt like I was playing the early stages of Dark Age of Camelot, the graphics were that poor. If you can afford the "maxed" out computer system it takes to run this game with full detail, then it is no doubt the best graphics ever seen in an MMORPG. However, if this isn't the case, then get ready to be disappointed.

The in-game user interface has also been changed dramatically, but not for the better. EverQuest II offers less bag space than the original, item dragging is not as easy, and it only allows a single space for earrings. If I'm not mistaken, characters have two ears, so this development decision simply doesn't make sense. The looting system isn't nearly as good as it was in the original, and the large number of changes to the experience bar and overall UI has made the screen seem crowded. Basically, it didn't feel like EverQuest, it felt like an entirely new series. Why change something that isn't broken?

EverQuest II features a new quest system, one of the great strides in the title over the original. Overall, I was really impressed as the new system, as the quest logbook is easy to use and really quite helpful. Also, the new rewards system for questing is much improved over the original. Completing these quests are now more rewarding than experience, money, and items. They are used as teaching tools and introduce players to new areas within the game.

The battle system in EverQuest II has really changed as well. It gives players more control and more to do than the original, and full of different attack combinations and heroic opportunities. It's not all about relying on that simple auto-attack system as it was in EverQuest. The heroic opportunities are a really innovative change to the battle system. They allow for more teamwork-oriented gameplay, as it allows for one person to initiate the opportunity and others in the group to follow in sequence with specified attacks to obtain maximum damage output. Though these attacks aren't the easiest to pull off, the result is much more rewarding and a lot more enjoyable experience.

Trade skills also have undergone quite a significant change in EverQuest II. Instead of the old point-by-point leveling, they are given an experience bar. This system is really easy to use, and makes players want to put more time into gaining trade skill levels. This change didn't really do much for me, but I'm sure other players may find it quite useful.

All and all, the game has a lot of innovative ideas, and outstanding graphics if your have the system to run them. Being an MMORPG, the replay value is near endless if you enjoy the series, as Sony continues to add new features and functionality. Personally, I wouldn't play this game in my spare time; I'm simply not convinced it's worth the investment. For the money, I'd much rather just play the original with its many expansions. Although EverQuest II has a lot to offer, SOE hasn't left my entirely impressed with this release. With that said, you can never completely judge any massively multiplayer title from the start, as I'm sure SOE will add many improvements to the game over time. I won't count this one out of my books forever, especially based on SOE's very positive history of updates to EverQuest.