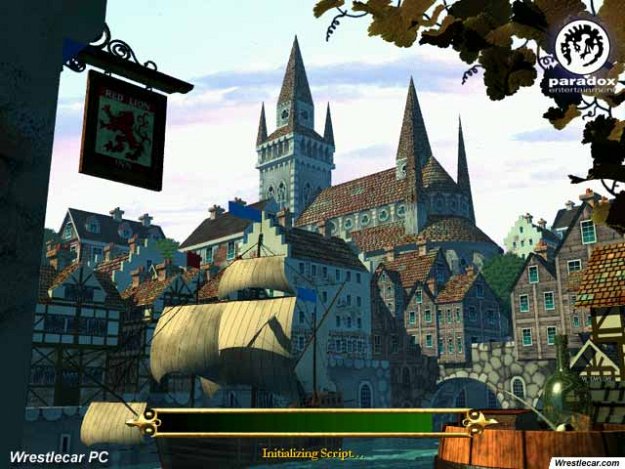 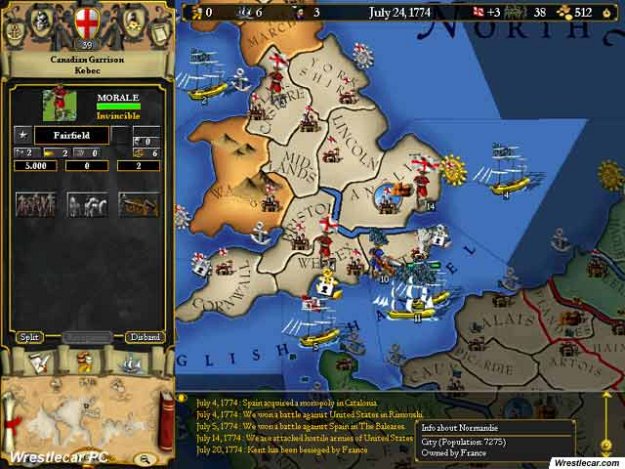 Have you ever dreamt of changing the past? Ever wondered what it would be like if Napoleon never existed? Published by Strategy First and developed by Paradox Entertainment, Europa Universalis is a hardcode strategy title that sends players in to the past to control a nation and attempt to dominate central Europe. Players select one of the scenarios or head online to manage and build a nation, all the while keeping other countries at bay.

I want it to be perfectly clear from the outset of this review, that Europa Universalis is not an Age of Empires type strategy game. Before you step into command, it appears to be a massive board game, while in reality it is much more. Upon first launch the game appears complex and difficult to understand, but after a few hours of play and completing the tutorial mission it all begins to come into perspective. Only then does it become clear just how massive Europa Universalis really is. 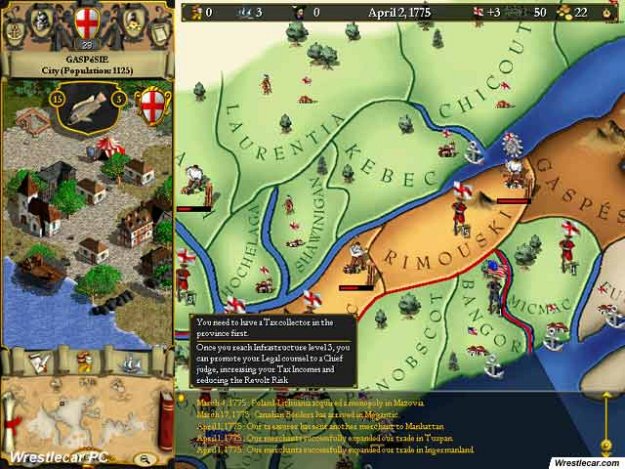 Europa Universalis has many modes of play, which include multiplayer and eleven single player scenarios. The scenarios range in difficulty and have different objectives for victory. They occur over a wide variety of time periods, between 1492 and 1792, and feature some important events during these periods, such as the 30 Years War. The heart of Europa Universalis exists in the Grand Campaign scenario. This scenario allows players to select a country and lead it through 300 years of history, with continuous real-time decisions needing to be made, all while attempting to balance your nation and control the many factors that can affect it over a 300 year time span. Also, other nations will be rising to, and falling from, power all around you, as they struggle to compete for survival and dominance. A good example of one of the decisions you will encounter is; the alliance in which you are a member of is changing religions, and you must decide whether to follow them or remain in your current state. Following them will destroy your stability, while if you should fail to follow their lead, the alliance will have a Casus Belli (reason to declare war) against you. What should you do? The future will be changed by this decision, and it can lead to prosperity or disaster depending on the outcome.

The interface in Europa Universalis is colorful and very graphical, but is very difficult to use. So many options are present and so much information is conveyed, it can become very confusing at times to navigate. Europe Universalis uses "pop-up" type windows to convey information while the game is in progress, and although a few of them are ok, it becomes very annoying to close a massive bombardment of them every few seconds. The introduction movie and in game cut scenes are simply magnificent, and really put the player into the mood and setting of the game. The manual is very detailed, and explains everything anyone needs to know about playing. Overall, excellent cut-scenes and a spectacular manual make up for an interface that is really only half-decent.

The general concept behind Europa Universalis is selecting a nation and controlling and shaping it from 1492 to 1792. During this time, war was ramped and every country battled for control. In Europa Universalis, leadership is the deciding factor, and your decisions will decide whether you become a dominant force in Europe, or end up in ruins. Players are expected to build a nation by colonizing unsettled land, and trade with other nations for much needed supplies. While expanding your nation, you are also expected to maintain a healthy balance, and be sure your population has enough food and gold to survive. Balancing financial strategies can be more difficult than defeating nations, but can also be easy if you do it correctly from the beginning of the game. As the government, you must show control and make wise and educated decisions to avoid rebellions. Players can construct ships and soldiers, and deploy them into battle. In Europa Universalis, you do not actually control any individual soldier, but rather, control a battalion of them. You do not tell them how to fight, instead, send them into battle and move them from province to province like a board game. Managing a nation is a massive job, and it is easy to become lost and overwhelmed in Europa Universalis with the huge number of options and responsibilities encountered while playing.

When people think of the term "war", a few large battles come to mind. Personally, I think of the battle of Vimy Ridge in World War I. What most people do not think of is the wars long before this generation. Between 1492 and 1792, war was a very common practice, and many countries were on the brink of devastation because of it. Europa Universalis accurately portrays the tension between nations during this time period in possibly the most realistic strategy title ever produced. You can pressure nations into declaring war against you by sending letters of hatred to their leaders, or develop an alliance with other nations by entering a royal marriage and signing peace treaties. War with other nations may give you a lot of victory points should you be successful, but can cost you a lot of land and troops if you are not. Decisions can be very difficult to make, and this is one thing that makes Europa Universalis unique. 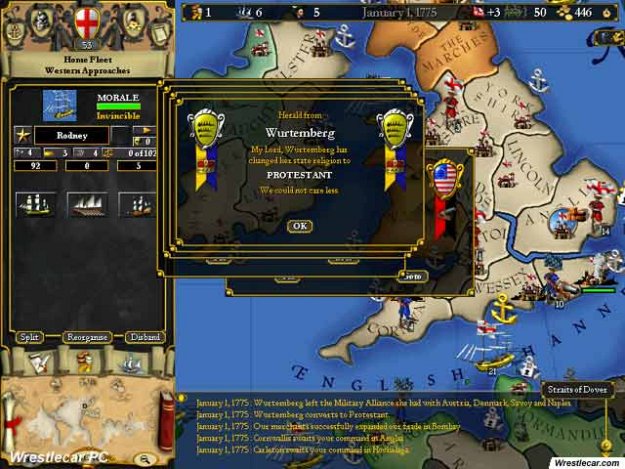 The graphics in Europa Universalis are nothing spectacular, but are very suitable for a game of this type. Europa Universalis appears to be a three-dimensional board game, with good battle sequences and good character animations. Luckily, a title such as this does not require excellent graphics to be successful, as it is mainly directed towards a strategic perspective. It is not a racing simulation or a first personal shooter, where graphics can make or break a title.

The sound is one of the weaker points of Europa Universalis. Although the music is well done and sets a good mood for the game, the sounds of combat become very repetitive and annoying to listen to. A wider variety of sound effects would greatly enhance and benefit this title, and would improve the rating awarded.

The tutorial within Europa Universalis is one that gives the player an understanding of the controls and the general playability of the game, but fails to show how each action interacts with other nations, and the reasoning behind them. The manual comes in here, but even then the game is so complex, it is easy to become overwhelmed. If you do not have a lot of free time to spend learning how to play and understanding how everything works, then this game is not for you. Europa Universalis has a very large learning curve, and I am still learning of some features after completely reading the manual and playing for many hours.

Victory is a sweet thing, but in Europa Universalis, it is very hard to accomplish. No matter how many troops you send in to conquer a province in control of your enemies, you will have a very hard taking it from their grasp. When you do manage to take it over, you still have to deal with restless natives who will often slaughter your troops. Rebels can be very troublesome to deal with should they take over one or more of your provinces. If you fail to eliminate these rebels, they may even form their own nation and break free from your country. This can have devastating consequences, as most of the game is fought for expansion rather than battling your own citizens. Victory in Europa Universalis is different in every scenario, but in most cases, victory is awarded to whatever country has the most victory points at the end of the allotted time-span. Victory points are awarded for completing certain tasks and winning in battles. Some of these tasks also award gold if you can complete them before a specified date. An example of one of these objectives is conquering a country or occupying a province within two years of the beginning of the scenario.

Europa Universalis includes a unique multiplayer mode where players can compete with up to eight players over a local area network or using the TCP/IP Internet protocol. Unfortunately, this game is really not designed or suitable for multiplayer, as offline, the game can be paused to make decisions and organize troops, but online this is not possible. If you should complete all of the scenarios, multiplayer is a change of pace, but do not expect anything to keep your interests for very long.

Europa Universalis is not for everyone. If you do not like the strategy genre, then avoid this title. If you enjoy playing board games such as Risk, or other strategy titles such as Tropico or even Age of Empires, then you will most likely enjoy Europa Universalis. As of the publication date of this review, Paradox Entertainment has already begun working on a sequel to Europa Universalis due to the overwhelming success of the first.