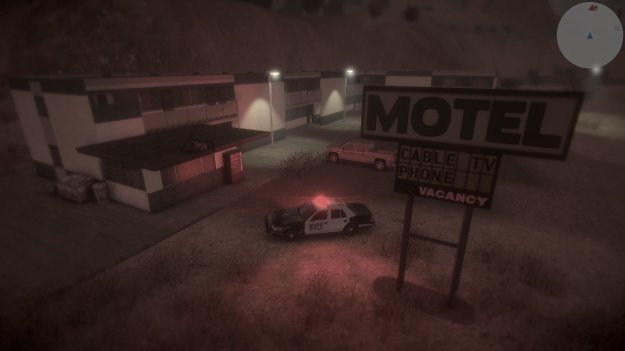 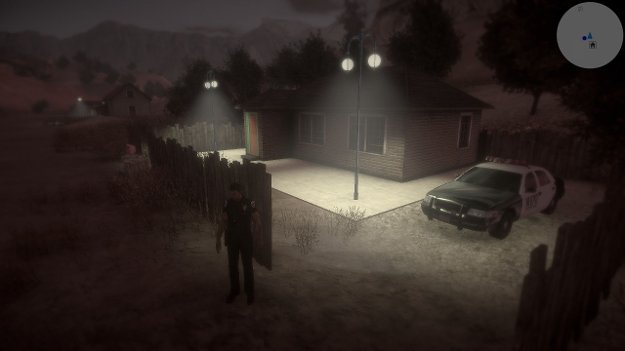 Enforcer is a cop simulator about taking over the streets of your town from all the criminals who have moved in and started ruining things with an influx of drugs. Or at least, that’s what it’s supposed to be. But what it actually is, is a simulator that has you going through the normal tedium of a cop’s life without much to break it up.

When I first loaded up the game, I had to go to my home, put on my cop’s uniform and immediately start getting to work. I managed to get dressed, get into my car and drive into town. When I got an assignment, I started trying to go about my duties. However, the controls were a little unclear as to how I needed to go about those duties. As in, practically nonexistent in game. I had to go to the Steam page to look at a developer post and a community post for further clarification as to how to do simple traffic stops, which believe me, is a huge chunk of what you will be doing in the game.

Once I’d gotten that down, I was able to start going about my cop’s life. My first day had me getting all sorts of emergency calls for assignments which was interesting. I got to respond to disturbances of a couple of different kinds. What I found though, was that when I responded and had to deal with a suspect, most likely that meant shooting them and waiting for the ambulance to show up retrieve them. It seemed a little excessive for a cop to shoot everyone, but when every crook in town had a gun, the stun gun that I was given didn’t really seem like a viable option to be using. 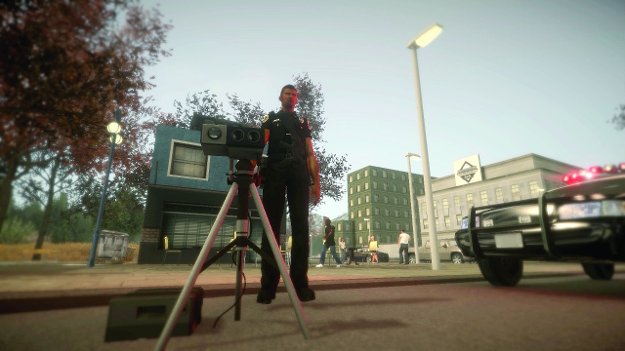 Even when you’re not using your gun to stop folks, you’re mostly just running around and chasing down criminals who are running away from you who run just as fast as you. Or driving the clunky car to try to chase them down.  There are a few missions that require you to check houses out to see what’s going on inside, but they’re honestly not as exciting as they seem like they should be. You walk into a block house with nothing inside the interior, try to find some random person and probably eventually have to use your gun on them.  When you get calls to protect a wounded person on the road, you show up, call the ambulance and that’s it.

In order to finish your shift, you have to go to the police station downtown and check in. Considering that I started my first shift downtown and stayed there it was fine, but on subsequent days I wandered a little further afield, which made it bad. You have to manually drive through all the towns little sections, which can take a significant amount of time when your cop is tired. The driving controls are a little clunky and your car takes damage and gas, both of which cost cash to repair and replenish.  From the cop station, you then have to make your way home to rest up for your next shift.

This can be a problem, considering that your home is some distance away and you have no means to get there besides running. That, or you can call your brother to ‘hang out’. You get a picture of you and your brother, your stress level drops and he drops you off at your house afterwards. But you have to hope that he’s available.  If you purchase a really really expensive car, you can’t really use it to leave at the station, because when you start your shift at your home, your cop car is sitting there waiting for you to use.  You’d have to drive your regular car to the cop station, then run home and get your cop car to go use that for your shift, wasting time and energy.

After the first day, the calls for events started stopping. I only got missions for testing drunk drivers, checking for speeders and testing cars for trouble on the road. Pure tedium. It was authentic, I’ll give it that, but it was boring as all get out. Checking out the forums I saw that other people were having the same problem. I had to exit out the game and go back in to start getting dispatch calls again to start getting any other more interesting missions. But even those get a little boring after a while and start repeating themselves. 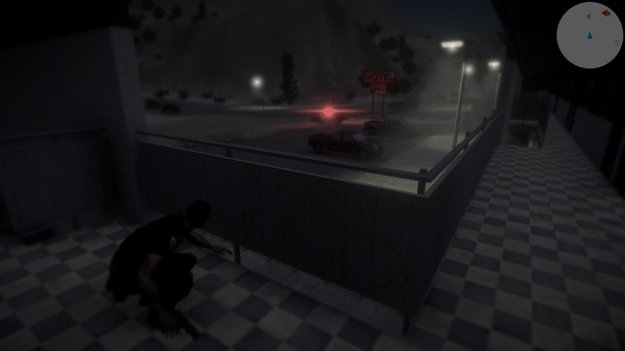 Unfortunately, what the game suffers from is a lot of repetition and not a lot to break it up. The missions tend to repeat themselves and while off duty time is supposed to be a part of the experience, it’s really not. Your cop gets stressed out and has to spend time doing things to bring their stress levels down, but that part of the experience really isn’t fleshed out. You can sit them in front of the TV, but all you get is a little cut scene of them flipping through channels. When they go to spend time with their family or friends, you get a picture of them with said person and an audio clip of cheering in the background. Your entire game experience is being on the beat.

And while your cop levels up and goes up in the ranks, there seems to be no real reason or advantage to going up in experience.  As you level up, the missions stay the same and you gain no experience points or ranks to level up or change how your cop does things. Your health and abilities stay the same and as a matter of fact, there are no real abilities to assist you in your duties. There’s nothing to help make the game more interesting and diverse or make it matter that there are ranks. They’re a superficial part of the experience.  The time system in the game is another small, superficial part of the experience. I went out one night at the end of my shift to hang out for four hours with my friends and the date was November 3. When my time was up, the date was November 23 or something crazy like that. It was very bizarre. There’s an in game calendar with dates marked off as if they’re important, such as your birthday, but things never happen and time moves in a very strange fashion. 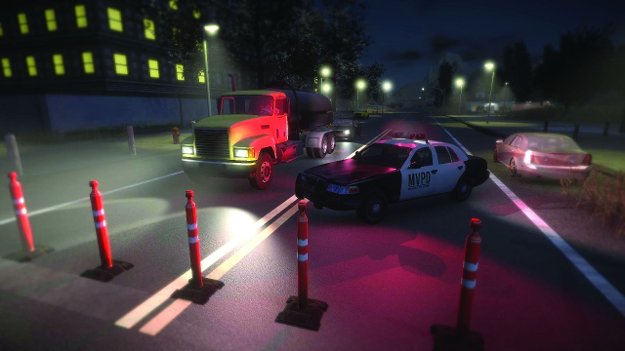 And the graphics are a little underwhelming for what I would expect to see. They’re somewhat blocky and simplistic, especially considering that there’s not a lot going on in the actual game environment itself. The cars and people are at a minimum and the weather effects are very simple.  The character models aren’t bad, but again, much lower resolution than I’d expect and I would actually have hoped to see something a little smoother and nicer quality.

Overall, the game is a little a little lackluster. It’s one of those games you can turn on and enjoy for a while; as a matter of fact, I turned it on and plugged away for quite some time before I really started getting bored with the repetition.  But after a bit, not having anything new to do and not being able to upgrade or change the experience really drags the game down.

As of the time of this review the developer is actually working on some fixes for some of the issues, such as the issue with the dispatch calls and are working on the ability to go on and off duty at both home and the police station. They are also supposed to be working on some more diverse missions.  However, the rest of the issues with gameplay remain and without being able to explore the new missions as of this time, I can’t say if they would change the tedium of the game, especially considering the issues with leveling and off duty time.