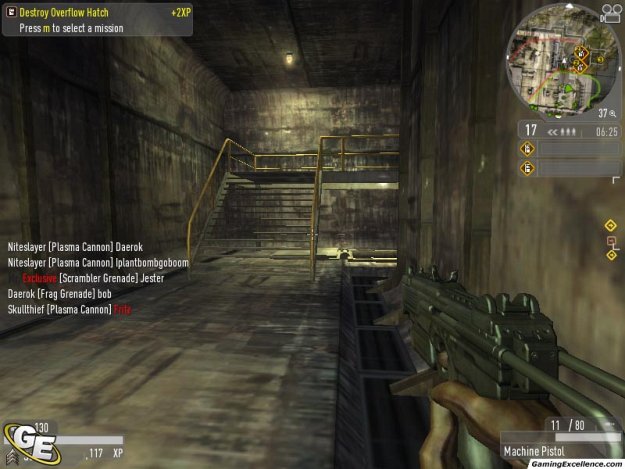 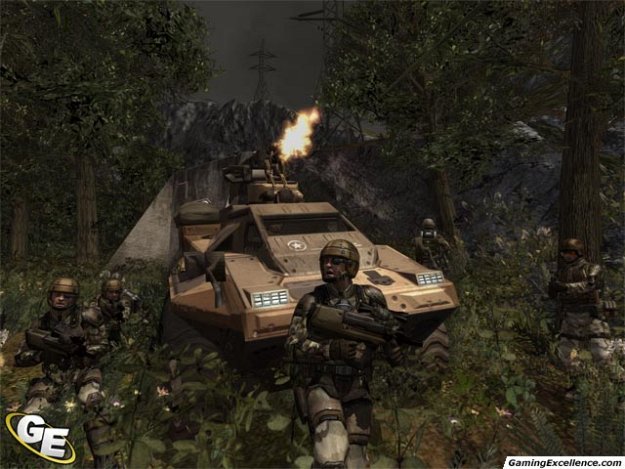 An explosion to the left of me, an air strike taking out the tank on my left I run for cover to protect my own life. Crouching low behind a half destroyed wall to avoid the suppressing fire of a group of filthy Strogg, I take out my machine gun pistol and lean out from behind the wall, shooting one in the face. As the technicians run over to patch up the fallen Strogg I try to hit them with my machine gun only to realize that I've used most of my clip. Luckily for me one of my teammates drove up at that moment with an Armadillo combat pickup. Quickly jumping into the gunners position I start shooting everything that moves as we try to lead a charge into the enemy position. Cutting a swath through the enemies we managed to reach our objective: a barricade in dire need of blowing up so we can reach Strogg command.

Jumping out of the vehicle, my driver moves to set the charge while I provide covering fire with the machine gun turret in the Armadillo. A sudden warning of missile lock makes me rethink that, jumping out just in time to avoid getting blown up. Taking out my sniper rifle and dropping the Strogg with his rocket launcher. The ground begins to shake and turning to my left I see a giant mechanical terror walking towards up, one hundred and twenty tons of bipedal death: the Cyclops battle walker. Saying a silent prayer I hear the barricade explode just as the Cyclops guns down myself and my partner with a well placed barrage of his guns. While I might die now, my mission is complete. The barricade is gone and the tanks are rolling this way. I can't wait to respawn in and join the charge.

Moments like this are what make Enemy Territory: Quake Wars such a memorable experience. Jumping head first into the battle for Earth between the Strogg and humanity's last hope, the GDF (Global Defense Force), you will take on the role of a simple soldier from either side in a number of game modes. All of these modes and game maps are full of choke points, strategic movement and frantic gunfights that all come together to make this a compelling, if not frustrating, gaming experience.

Picking up the game is fairly simple if you have played any modern first-person shooter on a computer in the past few years. However the devil is in the details. Once you have found a game, or started up an offline game against computer controlled bots, you will get to pick which side you wish to join, one of five classes, each with specific battle strategies and uses, and then a primary weapon for that class. The end result of all of this is that even if three of you pick to play a basic soldier you can each have a different weapon with an entirely different purpose: one might be there to take out vehicles with his rocket launcher, one will have the chain gun to take out ground troops and the other, with his shotgun, handles close range enemies. This immense focus on teamwork is what really makes this game so unique and fun.

As a warning this facet of the game does have the consequence of making Quake Wars ungodly punishing to those who come into it fresh and new, expecting to be able to single handedly storm an enemy encampment. Trust me; before you go online try some games against the bots. Once you can handle the enemy A.I. on the hard difficulty setting then you can brave the shores of online.

There are three different modes to choose from, each with its own set of maps. Campaign mode is a best of three, taking place on three different maps on one continent. You take turns being on the offense and defense, thus requiring you to constantly pick classes that work with your team. These goals are usually multi-fold and have you frantically trying to set bombs, blow up barricades and take out enemy positions.

Objective is a single match that takes place on one map. Depending on the map you will have set goals, so every time you play The Ark map you will have Strogg on offense and humans on defense. These are good for quick one off matches. Lastly are Stopwatch matches, the most annoying. Essentially you both take turns trying to complete the objectives on the map while the other team tries to stop you. After that the other team does the same but tries to do it faster. I've not found this mode a lot of fun.

As you play on the maps you will be given the choice of where to spawn in as you capture forward spawn points, allowing you to get to the combat quicker should you die. In addition your vehicles will only spawn at certain places requiring you to strategize where to appear and when. However this does cause some problems when you try to go for vehicles and they are gone thanks to your team. Even worse is when you spend time making a plan with your Fire Team, almost a MMO party if you will, and then as soon as you reach the enemies they blow your plan to shreds. The frenzied combat makes any actual plans you come up with tenuous at best and a total bust, and waste of time, at worst. It can be very disheartening at times.

The major interesting thing here is that when you kill enemies, complete objectives or damage vehicles or turrets you gain experience. This experience nets you general bonuses, like more ammo capacity or faster sprinting, or more class based bonuses, like faster rocket launcher lock on speed or more damage with a gun. The thing here is that you don't get to keep these when a game set ends so during a three round campaign match you will get more bonuses than you would from a one round objective map. These can add a whole new dimension to the game and the fact that they aren't entirely persistent prevents newbie's from being slaughtered by people who have been playing the game far too often.

Speaking of adding another dimension to this game, the vehicles are incredible. Each side has vehicles of its own and while there are a few unique to each side they by and large cancel each other out. Both sides have tanks, ATV's and a basic flying gunship but they have unique vehicles all their own. The humans get an Armored Personnel Carrier (APC) and an attack helicopter while the Strogg get jetpacks and a gigantic freaking bipedal battle mech. While it might sound slightly unbalanced the airborne assaults are really where it is at during some missions so it really evens out.

That is one of the major amazements with this game: no matter how psychotic the situation it never really feels unbalanced. Oh sure, some of the Strogg weapons seem more damaging and there's no denying the maneuverability of their vehicles but the humans aren't slacking off here either. Sheer power and brute force are, for once, on the side of the humans and they can make good use of this with gusto. The only thing that ever really felt unbalanced in this system is the two different airborne vehicles that the humans use can sometimes be a bit much to handle but a few rockets take them out of the air so it isn't that big of a deal most of the time.

While it won't win any awards for its stunning graphics the game certainly looks pretty good. However you will quickly learn the futility of having those good graphics running too high on your computer. When the shrapnel is a-flying and the peoples are a-dying you will start to slow down due to all the gunfire, debris and particle effects flying all over. So while it might be nice to see what the game looks like running on all cylinders don't try to do it online where it matters. There is one major issue that bears noting. The latest patch that was introduced has added in integrated voice, which is really nice and important for this game, but it seems to also be causing problems with some video cards. It took me in excess of three hours to finally figure out how to make the game stop just crashing on me.

As it stands Enemy Territory: Quake Wars is a great game that does what it set out to do, make an engrossing squad based FPS. With all your options and the ability to strategize with your teammates for some really incredible assaults this game really does its job overtime. Nothing beats using an ATV for quick transport and having your medic, who was your gunner, heal you while your squad mates in the tank back you up. If you are expecting something with a bit more depth to it than this game has then you are looking for a real-time strategy game. As far as blending tactical combat of the likes you find in Ghost Recon games with awesome FPS on par with the best shooters have to offer, this game does it great.