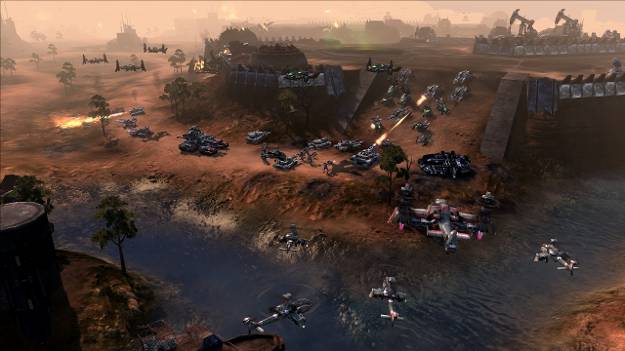 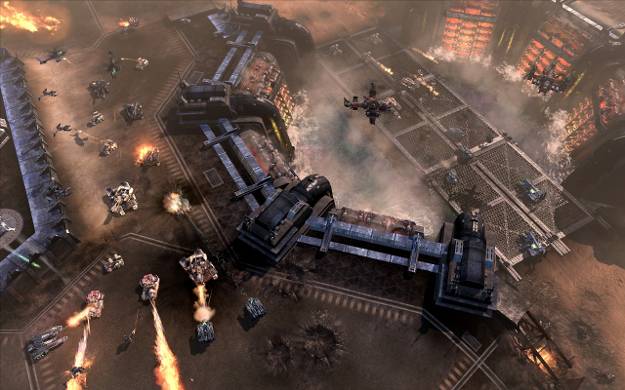 One surprising addition to the show this year was a massive booth by E3 newbie Trion Worlds. I'd normally take a crack at their otherwise obvious attempt to compensate for something, but they really weren't. Though only showcasing two games, much of E3's PC chatter was centered on one of them: End of Nations.

Trion Worlds, a company with a penchant for MMO games, has joined forces with Petroglyph, the EA-resisting half of Westwood Studios known of course for the Command & Conquer series, to create a brand new flavour of RTS gaming.

End of Nations is set in a dystopia caused by the failure of the economic system as we know it. A secret group calling themselves the Order of Nations, emerged from the shadows and grasped the opportunity to take over the world and unite the planet under a single banner, at the cost of individual freedom and civil liberties. The game thus calls out to rebel commanders worldwide to join forces and overthrow the evil dictators. Since the Order has far more advanced technology and virtually unlimited resources, tactics and sheer numbers will be the only factors on your side, as you build your resistance from the crumbling remains of the old governments.

When starting the game, an overview of the world's status is shown. Other commanders you might have friended may already be engaged in battles in some corners of the world. If you are to join them on the battlefield, you'll have to get an army ready. Here's the first key deviation from traditional RTS: each player has a persistent headquarters where research and upgrades occur. Players can only see other headquarters -- they may as well exist in another spatial dimension -- as this represents your commander's skills, abilities, experience and inventory in the MMO sense. It is here that commanders will assemble an army to deploy onto a battlefield. Most choices available here will be affected by the commander's experience in battle, collected spoils of war, and the game's persistent economic model.

Newcomers will have to choose a specialization for their army, a concept akin to MMO's character classes. Though the actual classes haven't been revealed (or even cemented), this will be a key element to distinguish players on the battlefield to compel cooperation and coordination between allies. Whether focussing on strength with battalions of tanks, destruction by long-range artillery, or recon from speedy units, all commanders will have access to mostly the same units but will find that their talent tree and available abilities will target power-ups more suited to their particular class.

Key RTS deviation number two: there's no such thing as a skirmish on a randomly-generated map. Battle locations are persistent as well and will exist all over the world map. Though you're welcome to start pounding away at players who aren't wearing the right shade of blue (unit skins are customizable), most maps will have a distinctly PvE focus in accordance with the storyline. In fact, since the map's difficulty will dynamically adjust to the number of commanders on the field, it's likely to be in everyone's best interests to focus on the real enemy. Though tight-lipped on the variety of mission objectives, Trion assured us that there would be plenty to choose from on the world map. The challenge won't be on the order of typical RTS maps either; the scale of the environments and the enemy far surpasses anything you might have seen before. The mission shown at E3 showed the rebellion attempting to capture an enemy base of strategic importance, but said base was bordered by impressively massive defense structures that dwarfed the commander's best units. In addition to scale, there's also going to be more puzzle-like elements to maps that will affect your strategy. You'll have to decide whether you want to coordinate a wall breach, or split up and tackle the war factory spawning enemy tanks first.

To strike a sense of balance between players of various levels, a commander's entry into a battle is capped by a unit point value, whereby stronger and more powerful units count for more points. This means that beginner maps may, for example, allow newcomers to bring in 20 armoured trucks versus an experienced player's single behemoth tank. Marking the third key deviation, MMO elements come in to play a key role in the balancing and tactical strategy of the game. Seasoned commanders will have access to abilities and ammo that temporarily change the properties of their units. When feeling particularly ballsy, one might use an ability to boost the attack strength of their units at the cost of lowering their defenses. "Consumable" power-ups collected from the field or from previous battles can also change the tides of war. For instance, one can load EMP charges into a specific unit to temporarily immobilize any enemy fired upon. There's a subtle strategic element to these modifiers -- assigning the EMP ammo to rear artillery may likely be more profitable than loading them into front-line skirmish tanks. Other consumables are more akin to "healing potions", instantly repairing selected units in battle.

For those who prefer a more hands-off approach to warfare, the game will feature a meta-game that allows commanders to control their attack on the Order from a strategic map of the world. The goal here is to expand your borders at the demise of the Order, which will somehow contribute to your army's skill and experience. Other player factions may also encroach upon your territory, so you'd best not go offline for extended periods. Though this mode looked interesting, it was not the main focus of Trion's showing, for reasons that should now be fairly obvious.

End of Nations stands poised to be the first successful MMORTS game because concepts from both genres were merged early in the design phase, and it shows. Nothing in this game felt awkward or ill-conceived, and the equal balance between both genres has strengthened the gameplay rather than unnecessarily complicate it. In addition, the incredible polish in a game that's still pre-alpha is absolutely shocking. It's a real shame that we'll still have to wait until some time in 2011 before getting our hands on this one.