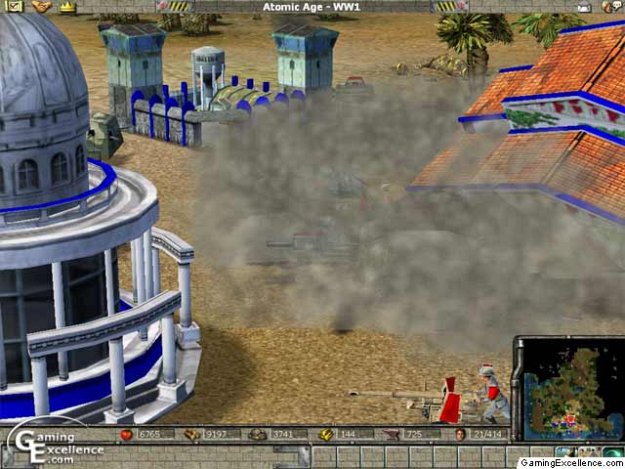 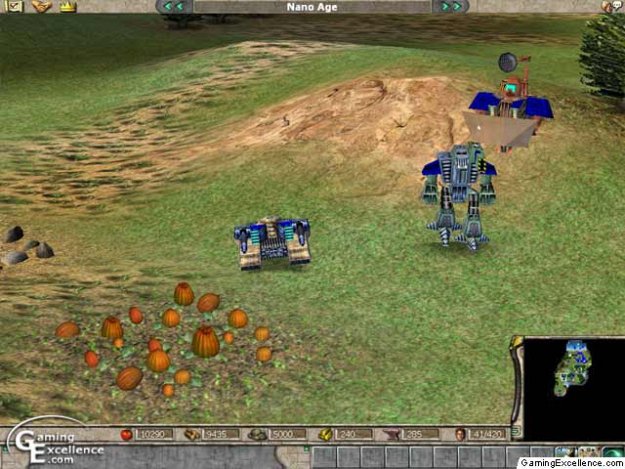 With so many real time strategy games available, it is hard to choose one in which to purchase. Most are very alike in general gameplay and features, but Empire Earth is different, allowing players to engage in combat over a time span of 500,000 years, from the days of cavemen to the future with Nano bots. Prepare for an endless battle, as once you begin playing, you will not be able to quit. 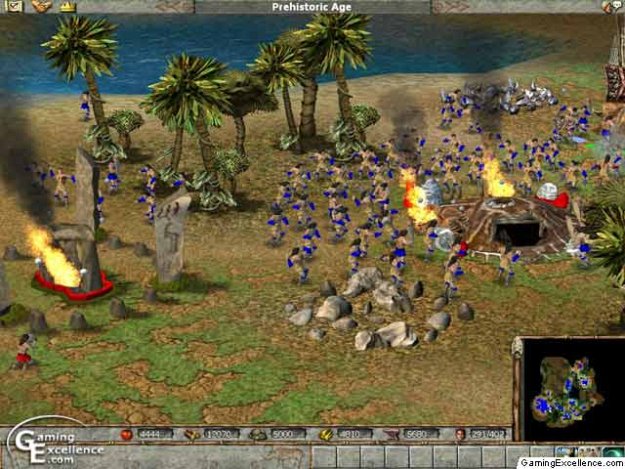 Upon launch of the game, players are faced with several options. Empire Earth features several single player modes of play, including a random map generator and scenario and map editor, where you can develop and create your own scenarios. Empire Earth also includes a fully integrated multiplayer system through Sierra.com or a local area network.

The selection and variety of epochs present in Empire Earth is one of the most outstanding features. Stainless Steel Studios have successfully added half a million years of history and the future into Empire Earth. You can begin at any point in history and progress through the ages, whether it is beginning in the days of cavemen or starting in the Nano age. The most popular epochs included are the World War II and modern age, but every epoch offers a unique challenge. The ability to select from 21 predefined civilizations or develop your own custom civilization from approximately 100 traits is something unique in Empire Earth as well. Develop your civilization carefully, as you will be forced to rely on those traits to your advantage on the battlefield.

Units are another ongoing accomplishment in the field of real-time strategy games. Empire Earth features a massive number of units, and as you progress through the epochs, new units will become available while others become useless. Everything from tanks, helicopters, subs, nuclear weapons, and ground troops have bee included. Every unit behaves differently, and has specific strengths and weaknesses. Although you may be familiar with a specific aircraft, your opponent may be more familiar with a ground unit, and you must be prepared to defend against an attack. It is important to understand the strengths and weaknesses of each unit, and exploit them when facing opponents, as this is the best way to guarantee success.

The graphics in Empire Earth are superior to any previous real-time strategy titles of this type, but have high demands in the hardware department. The visuals are crisp and clear, with an extraordinary amount of detail and accuracy in each unit. The ability to zoom in and out of the map has been included as well, as the game uses a three dimensional engine, something not often used in games of this type. Although the ability to rotate the map is not present, the zoom feature can become useful when dealing with a small number of units, or planning strategy for an attack. The interface and menus are very detailed and easy to Overall, Empire Earth scores big in this department, but the large hardware requirements pose a problem for those with lower-end systems. 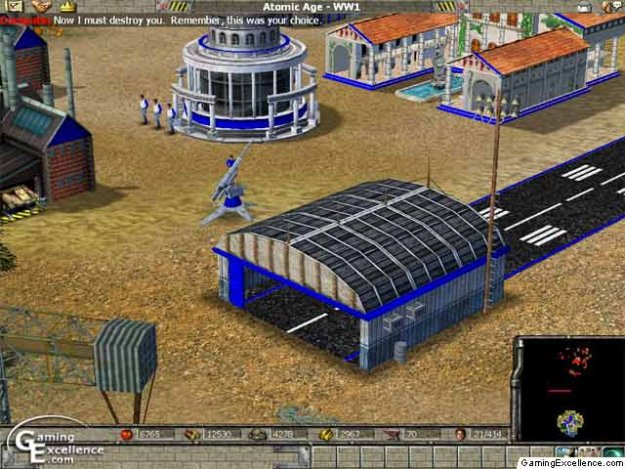 As with units, buildings and other objects play a significant role in the development of a civilization. Empire Earth features a wide variety of units for construction, many of which become unlocked as the ages progress. Airports, naval yards, town halls, settlements, barracks, temples and many other units play a crucial role in your ability to function as a nation. Barracks and other military buildings are often the target of attacks, so it is wise to protect these buildings with necessary force. It is also possible to construct wonders within Empire Earth, each offering a special ability unavailable to others. Six of these wonders are present, a good example being Pharos Lighthouse. If this wonder is constructed, the water will become illuminated, which is a great advantage when planning for an attack or defending your nation.

One feature I was not impressed with was the presence of Prophets and their abilities. These abilities include creating natural disasters, which often destroy a complete settlement. It is also possible to spread disease such as the plague to enemy troops and civilians by using Prophets. When a prophet can walk into an enemy settlement and create an earthquake or a volcano that can destroy most of the city, something is not right. It is possible to win the game simply using prophets, and I find that unrealistic. The ability to spread disease is understandable, but the power to destroy an enemy settlement through natural disasters is a disaster in itself.

The gameplay included in Empire Earth is very similar to that of most real-time strategy titles of this genre. Although a three-dimensional graphics engine is used, the game engine is the primarily the same of that in Age of Empires. The only complaint in this department is that the units are not always aware of each other. For example, clipping issues are often present when tanks and other ground units are battling with enemy units, and although this doesn't really affect the game in general, it could be fixed to offer more realistic gameplay.

Although confrontation and war are the primary aspects of Empire Earth, resource management plays a very important role as well. Gold, stone, wood, food, and iron are all required for survival against your foes. These precious resources are required for almost everything in the game, from creating citizens to constructing buildings and developing technologies. Technology is the heart of Empire Earth, and a massive technology tree has been included. Almost every unit is upgradeable, whether it is an increase in speed or simply a better defense system. This is another outstanding feature present in Empire Earth, and makes every game a unique one. 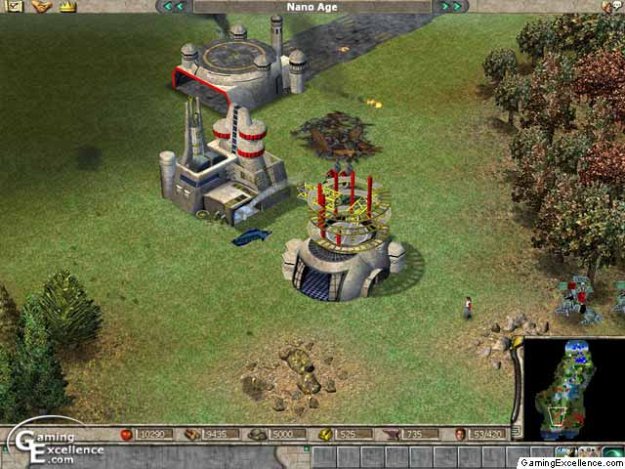 Sound is something often overlooked in games, but Empire Earth takes sound effects to a whole new level. The background music is outstanding, and really adds to the general theme and mood the game. The music changes depending on how you are flourishing in the game. If enemy troops are slaughtering you, then the music is a depressing tune, but if you are destroying an enemy settlement, the music is louder and more upbeat. A huge variety of sound effects have been included as well, and they really suit the game in general. The air raid sirens going off as your anti-aircraft guns shoot enemy planes out of the sky, and the sounds of exchanging gunfire between troops are an excellent aspect of Empire Earth, and one of the best sound packages seen in any recent title.

Multiplayer is an important feature in any title these days, and Empire Earth is no exception. Similar to most other Sierra titles, Empire Earth offers a complete matchmaking package through Sierra.com free of charge. This is hands-down the best aspect of the game, as players can compete with up to seven opponents through Sierra.com or a local area network. The multiplayer code, although somewhat demanding in terms of bandwidth, is quite stable, and I have been very impressed with the online community. It is not hard to find a game in which to compete, as something is always available. This is one of the most addicting features, and what really makes Empire Earth superior compared to other real-time strategy titles.

Although it is not perfect, Empire Earth is an excellent addition to any gamer's collection. The replay value of Empire Earth is incredible, and is something that will keep you hooked for hours. Although it may appear similar to Age of Empires and Cossacks: European Wars, this is a whole new battlefield. No other developer has attempted to take all of human history, and successfully combine it into one single game. Stainless Steel Studios have succeeded in doing so with Empire Earth. As you travel through the ages, you'll be faced with many obstacles and challenges, and only the strong-minded will be able to overcome them. Prepare for a battle, because Empire Earth offers exactly what you are looking for.