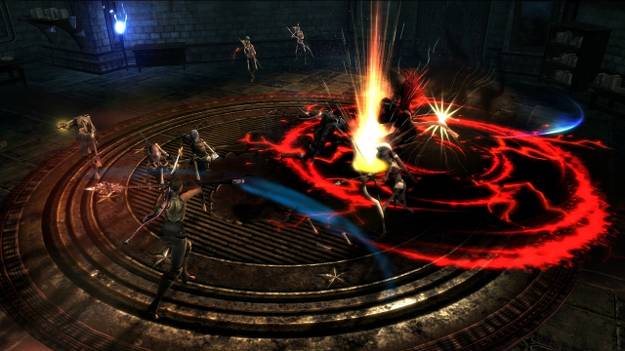 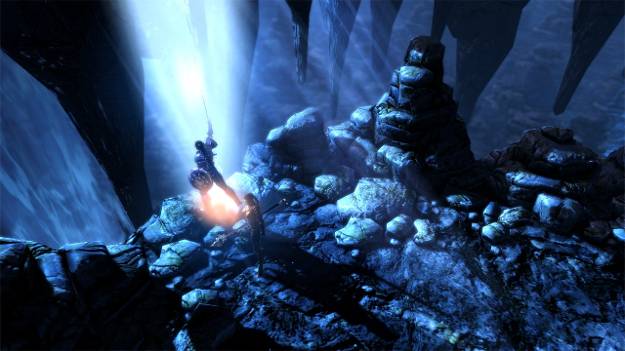 Dungeon Siege III takes players back to the legendary land of Ehb, where the fierce 10th Legion protects the citizenry and provides justice, peace and prosperity. But that peace is ruined when Jeyne Kassynder decides to revolt against the Legion, hunting its members down and killing them. Years have passed and her reign of terror continues, causing the common folk to lose hope. You are one of the last of the Legion, destined to help it rise again and bring peace back to the land by taking it back from those that would harm it.

The game is a basic action RPG, with players being able to pick from four different characters to play. Each character is one of the last members of the 10th Legion, with a different back-story behind them. One is the long lost daughter of an important Legion member; one is a descendant of a Legion wizard and so forth. However, when playing the game, I was disappointed to see that even with a different back-story, each character has exactly the same opening action sequence. In fact, the opening conversations you have are pretty much the same with only a few variants. An opportunity to customize each characters starting level was missed here and it seems a waste in an RPG that puts such a strong focus on back-story. The starting experience of playing the game puts across the initial impression that each character is just like the others, with the changes between them being more cosmetic than anything else. More on that later.

Once your character is selected, you begin to progress and I found it very easy to pick up on game controls and to figure out how to activate attacks and powers. The game does a very comprehensive in game tutorial that takes the form of little pop up messages telling you how to interact with the world. For instance, press A to attack, press RB to interact with objects and so forth. They gave the prompts with enough time for the player to react as well, for instance, the prompt to use A to attack came before getting into an actual combat situation. This enabled me to learn the command before getting my character's face punched in, which was awesome! I didn't have to learn attacks on the fly in the middle of a burning building. The game's instruction book also does a good job of explaining how to control characters.

And for status effects and other miscellaneous information, Dungeon Siege III has an in game Help Topics menu that answers the remainder of your questions. What to know what Withering or Doom does? Check out the Help Topics. The game did an excellent job of allowing me to know exactly what I was looking at on the screen during inventory changes, leveling up and so on.

However, while each of the characters is cosmetically different, they all have the exact same healing ability and each have either abilities that are geared to ranged or melee combat. There are no characters that specialize in say, ranged abilities almost exclusively. In other words, each character is equally capable of handling a baddie who's far away as they are one that's spitting into their face.

In a one player game, this works very well. No matter which character is chosen, the player is able to progress through the story without being afraid of getting into a situation their character can't handle. Playing on normal difficulty, I was able to progress through much of the story without getting my character killed once. Not a single death, in an action RPG that throws enemies at you that range from hordes of mercenaries to spell casting witches that throw magical energy from a distance. Each character is a virtual powerhouse onto themselves, equally able to handle one or ten enemies. And at a certain point in the game, one of the other playable characters is added as a 'companion' in the one player game, becoming a non controllable NPC that helps kill enemies. Between the super capable characters and the super capable NPC's, getting through this game one player is no biggie.

However, in a multiplayer game, it stops being "Oh cool, I just took out that super hard boss!" and starts becoming, "Oh. Joy. We killed all the enemies before we blinked twice." The multiplayer mode seems tacked on and sloppily done with very little attention paid to balance. Because every character is equally able to handle all the enemies on their own, there's very little need for a second or third player to join in. There's no appreciable difference in enemy difficulty nor is there any difference in the amount of enemies that you fight. Every character being so equally capable becomes a hindrance in a multiplayer environment. In addition, when another player joins in the game, the NPC characters don't react any differently. Dialogue options stay the same and the other players aren't even acknowledged. In other words, the NPC's don't realize there's another player in the game because the story was specifically built for a single player only. In multiplayer the camera also goes a little banana, making it difficult to control characters in a fight. One player may end up pushed off the screen because one has moved up too far when fighting an enemy.

Pickups and equipment also come into play here, and once again, there seems to be a considerable difference in how effective they are in one player versus multiplayer games. In a one player game, many of the pickups will be geared towards the player character, which means that they're able to upgrade and get better equipment fairly easily. However, in a multiplayer game, most of the pickups still seem to be geared towards the first player. In one multiplayer session, I saw the first player in the game receive about seven new equipable items in an area while the second player only got two.

Again, the game is geared towards the first player being the only player, being the only important person in the game. It just adds to the overall disappointment in the multiplayer aspect of the game. It's no fun playing with others when they're getting all the cool stuff and you're stuck with your starting equipment and have to use party gold to constantly buy better items.

The game world is rendered nicely and the flashy animations when player abilities are going off are very nice to look at. However the enemy models and facial rendering on the NPC's that speak to you leave a lot to be desired. Many of them seem bored and a little tired, both with facial animations and with the voice acting. But the rest of the game makes up for it in looks, with the environments being fairly detailed with attention being paid to mood. The haunted mansion looks old and disused. The spider infested forest has webbing in various different places. The music is also nicely done and is very atmospheric, giving a good background to the action and story being played out. In an action RPG it's always nice to have background music for those long forest and dungeon runs, as opposed to empty silence.

And in game documents and some conversations with NPC's fill in the storyline, giving a full and rich history of Ehb. It's an interesting land with a colorful past and I actually found myself enjoying it when I found more documents that detailed events that had happened prior to the game.

Don't be mistaken however; the game is enjoyable to play. In single player. Multiplayer is a lot more dicey and I think it takes a good group of friends to put up with it and not get frustrated. I would have also liked the characterization to have made more of a difference and for the individual characters to be allowed to stand out more. Why bother giving me an opening cut scene that details my character's background if the game plays out pretty much the same regardless of who I picked? It's a letdown and does an injustice to the characters. I might as well have been playing 'The Warrior' or 'The Wizard' as opposed to actual named characters. And for all the difference each individual had in fighting capability, they could have simplified it even further to 'Character 1' or 'Character 2'.

Dungeon Siege III is a decent game; it just let itself down by not living up to what it could have been and by making some sloppy mistakes and over generalization that took away from any individuality or change in experience from one play through to another.