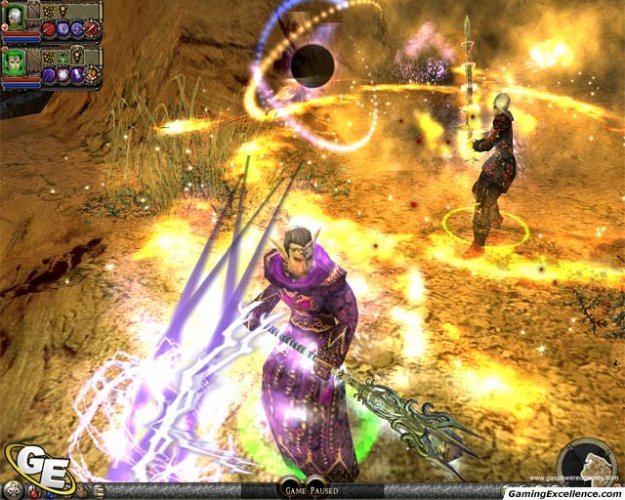 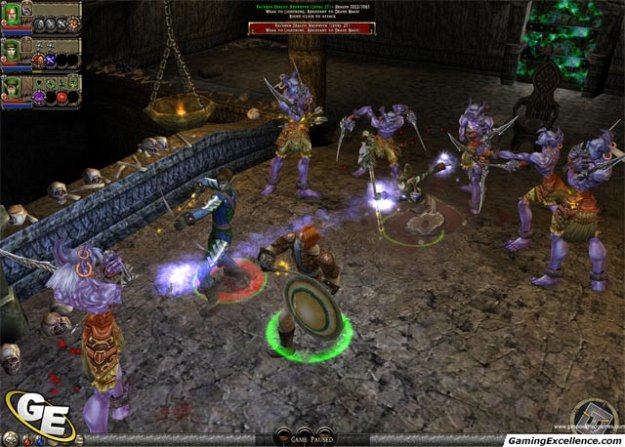 The Gas Powered Games developers are best known for their work on Dungeon Siege, an RPG game with enough depth to best many others. While this did seem to be a high point in role playing games, I couldn't wait to see how the original's sequel would shape up. After many consecutive hours of uninterrupted gameplay, I could only come to one conclusion: the sequel is even better than the original.

Like its predecessor, Dungeon Siege II takes place in the strange and mythical world of Aranna. The story tells of an ancient war between two godlike beings, Zaramoth and Azunai, which culminated in an epic battle on the Plain of Tears. At the height of the conflict, Zaramoth brought his giant sword down upon the shield of Azunai, creating a giant fissure in the earth that swallowed the souls of both armies. A thousand years later, a powerful man by the name of Valdis ventured into the mountains and, with the guidance of unearthly visions, discovered the sword of Zaramoth. Corrupted by its power, Valdis now leads a mighty invasion force in search of a mysterious object said to hold supernatural abilities. Cue the music.

The first thing that needs to be mentioned is how in-depth the campaign story mode is in comparison to the original release of Dungeon Siege. One of the only complaints that I had about the original game was that the plot seemed to be taken relatively lightly. Your character didn't have any kind of personality at the end of the game other than "uber-stats". Gas Powered Games took this into consideration, but have greatly expanded on both the storyline and player interaction with other in-game characters. Compared to the original, Dungeon Siege II feels like a completely different game.

One of the biggest additions to the game is the ability to raise pets. Pets specialize in four different areas of combat, just like other character units. These four areas are melee, ranged, combat magic or nature magic. One of the most intriguing parts of this gaming concept is that your pets grow up over time until they reach a mature stage. This is accomplished by feeding your pet items of the four areas mentioned above. A pet has five stages of development, cumulating to a matured final status that gives your team an extremely powerful passive bonus. Each stage has a bar that fills up the more you feed your pet items. The better the item, the more potential money you lose and possible equipment that could have been used later on. This trade off is something that you need to consider before you even think of buying a pet. Once the bar is filled up in any particular stage of development, your pet receives a special development bonus depending on the types of equipment and weapons you've been feeding it. For example, melee weapons produce a bonus to strength and overall hitpoints. Pets are far weaker than other characters in the game, and are therefore only valuable when they are fully matured. You need to be willing to sacrifice a good piece of armor from time to time in order to level up your pet. In my game, I managed to purchase a dire wolf by completing a side quest early on in the game. The in-game NPC that owned the pet shop said that the dire wolf was a rare pet, so I decided to level it up as fast as possible. In turns out that the dire wolf's passive bonus is 60% reflection bonus of all physical attacks back at the enemy. So while the dire wolf was not my strongest unit, its passive ability allowed my whole party to receive a bonus that gave them an extremely powerful defensive and offensive bonus.

Another one of the bigger surprise additions was the ability to create enchanted weapons and equipment. This ability does have its limitations however, since it does require certain types of materials and equipment to make these enchanted items. Oh, and don't forget that you'll have to fork out some coin at the same time. Like your standard RPG game, monsters randomly drop different kinds of weapons. These weapons can range from regular weapons to super rare magic weapons. What the developers have done to incorporate custom weapons is to add a new base regular weapon. These weapons vary from 'good' to 'rare' and give varying amounts of 'enchantment space' possibilities. Each upgradeable weapon is given a certain amount of slots that you can use to fill up with enchantments. These enchantment items can be purchased from shops, but some of the more powerful ones can be found at random or by completing quests. Once you have selected a combination of enchantments on a given piece of equipment and completed its construction, the change is permanent and can never be re-enchanted or undone.

One of the most welcomed additions to Dungeon Siege II is a complete revamping of the magic spells that can be earned. While some spells are familiar, such as 'resurrect' and 'fireball', there are plenty of new spells that have cool effects and do tons of damage. One such spell that is new to the game is called 'Summon Teleporter'. This spells allows the spellcaster to teleport his or her party back to a town and at the same time create a temporary two way portal back to their original position on the map. This spell is very useful when you are running out of space in your inventory to hold all of the items that you collect on your journeys. While you could feed most of these items to your pet, if you have one, sometimes it's better to just go to a town and trade the items in for gold. Another neat feature is the storage chest that is located in each town. This chest is a sort of vault where you can hold items that you don't want to sell, but will need later on. This is especially useful for storing the components for future enchanted equipment, as well as items that can't be used till your character has levelled up a couple more times.

As in all great role playing games, the ability to customize your character is a necessity, and the more detail you can give the gamer, the happier they usually become. The original Dungeon Siege did not allow for any character customization beyond the clothes the character wears, the color of their skin, and their gender and race. The sequel takes character creation to a whole new level. There are five races to choose from, each with different strengths and weaknesses. For example, the half-giants receive a +6 bonus to their strength while at the same time receive a -2 bonus to their dexterity. This somewhat limits you to a certain playing style with different races, but at the same time the game is trying to simulate statistics that make sense. Who ever heard of half-giant with the intelligence of an elf?

The biggest innovation to the levelling up system is the addition of a Skills Specialty Tree. In the original game there were three traits; strength, dexterity and intelligence. These traits used in conjunction with different types of weapons increased 4 experience meters; melee, ranged, nature magic and combat magic. Certain weapons and spells required different levels of experience before your character was allowed to use them. In Dungeon Siege II, a skills speciality tree is added for each experience meter. Basically, as you level up, you earn skill points that you can spend on any one of the four skills charts. Skills are unlocked as you gain experience with different weapon types and each skill gives you different bonuses. For example, in the melee skill tree, there are skills that you earn that allow you to upgrade your critical strike probability, or even your melee damage. There is even a melee skill that allows you dual wield certain melee weapons.

The overall quality of the graphics in the game seems to have undergone a slight tweaking since the release of the original Dungeon Siege. The in-game graphics are sharper and crisper than before and the level of detail of the character skins is quite impressive. There are a vast number of different equipment and weapon models that make the game quite interesting the whole way through the story. The camera control is just as good as the original game and even allows for zooming in for an up-close-and-personal view of your characters. Even when you are zoomed in as close as possible, the level of detail is still very impressive. The in-game cutscenes are fairly well done; there are CGI clips for important story details, but overall the in-game cutscenes work well enough.

The quality of the musical score hasn't changed very much since the first Dungeon Siege game. However, the music keeps to the same general style as the previous releases, and really makes you feel apart of the Dungeon Siege universe. The voice acting for the NPC's is fairly well done and a lot of effort was put into making a large number of conversations readable as well as spoken.

Dungeon Siege II not only maintains the same look and feel of gameplay as its predecessor, but also increases the depth to make it really feel like a new game altogether. The storyline is interesting enough to keep the average gamer playing into the wee hours of the morning. While the graphics engine may have only been tweaked slightly, the changes that were made only enhance the gaming experience. If you've played and liked the first Dungeon Siege, you'll love the sequel.