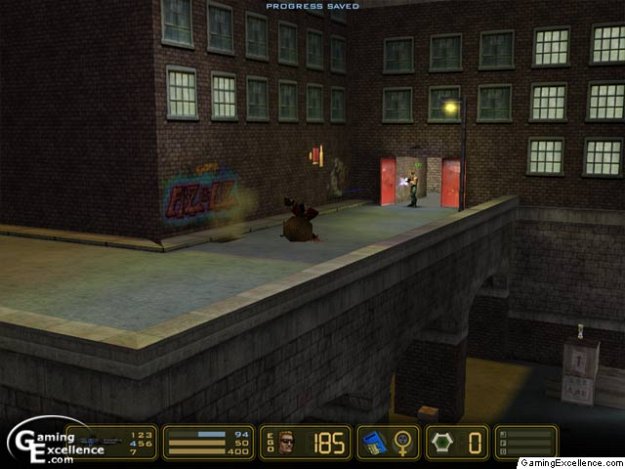 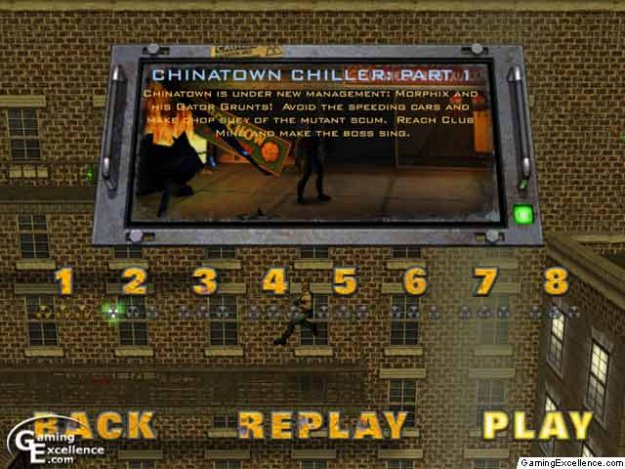 Anyone who is familiar with PC shoot-em-up games has heard the name Duke Nukem. Launched in the early 1990's as a shareware title, Duke Nukem quickly rose to be one of the best side scrolling shooters of the period. Soon after this side scrolling adventure, Duke took part in a first person shooter, one of the most groundbreaking titles released at the time. With his humorous quotes and violent nature, Duke is still one of the best characters ever created for gaming, ever!

Duke Nukem Manhattan Project is published by ARUSH Entertainment and developed by Sunstorm Studios, known most notably for the Deer Hunter series of titles. Duke Nukem Manhattan Project is a side scroller, for those unfamiliar with the term just think of the original platform games where players can only move to the left or right, and jumping from platform to platform is a common occurrence. Although the original opinions of many were skeptical regarding the idea of a modern side scroller, it has proven successful. Sunstorm Studios have successfully combined the key elements of an entertaining title into Duke Nukem: Manhattan Project, and that is just the beginning.

The game takes place in; you guessed it, New York City. Unfortunately, you probably will not recognize it, as no actual landmarks have been included that represent any part of the city. Once again, Duke Nukem is after his arch nemesis, Mech Morphix. This time Morphix has released a substance called GLOPP that is mutating everyone and everything. Of course, what would a Duke Nukem game be like without "the babes" that require the dire assistance of our hero? Well, Duke Nukem Manhattan Project has that as well, you could almost say this title represents Duke in every way imaginable, "babes", violence, and entertainment.

Duke Nukem: Manhattan Project is broken down into eight different episodes, the first few are short and can be completed quickly while some of the later episodes require some thought to complete. Overall, the game is quite lengthy, but can only derive interest for a period of time before blowing mutants to bits will get a tad boring. Each episode takes place in a different location and setting, whether it is the skyscrapers of New York, through the streets of Chinatown, or into the demolished subway station below the city. Each level contains a variety of secret areas and often multiple paths for completion; extra bonuses are available for players who have a sharp eye, so it is important to keep on the lookout for anything that may be of significance.

The visuals presented in Duke Nukem: Manhattan Project are completely rendered a three-dimensional perspective, although the game is primarily uses the X and Y axes. This depth that each object is given offers much more detail than most side scrollers, and has allowed the developers to use exceptional texture modeling. Explosions and smoke effects are well done, and provide high levels of detail. The explosion created as a pipe bomb goes off kills any unlucky mutants in the vicinity, literally splattering them in all directions. These effects are generally well done, and have a humorous aspect to them.

Without a doubt, the sound effects are the best part of Duke Nukem: Manhattan Project. The game includes a solid musical background suitable for any Duke Nukem title, but the vast selection of entertaining comments are what make this game so much fun. On several occasions, I found myself pausing the title to catch my breath after laughing at one of his comments. An example of these humorous remarks can be seen after the first time you are killed. Upon respawn, Duke will mention something along the lines of "son of a b..." well, you get the idea. Throughout the game, Duke also uses modern cliches to lighten up the atmosphere, "you are the missing link, goodbye!" and "time to deliver Max Payne on the a-train" are two good examples of this type of lighthearted humor. Some of Duke's speeches could be seen as offensive, so players may find themselves disabling the speech, as the humor is extremely lowbrow.

Duke Nukem: Manhattan Project contains a nice collection of seven different weapons for use, each having unique characteristics and advantages. These weapons consist of a pistol, shotgun, assault rifle, GLOPP gun, pulse cannon, pipe bombs, and the ever-powerful rocket launcher. The primary weapons that will be used are the assault rifle and rocket launcher when it is made available; the other weapons all offer interesting concepts but often are not as effective in the kill versus progress ratio. The GLOPP gun is an interesting weapon as it fires anti-GLOPP beams that return your enemies into their natural state, whether it is a pig, insect, or any other type of strange creature. The pulse cannon is the most powerful weapon in the game when fully charged. This weapon is virtually unstoppable, unfortunately it takes a few seconds to charge up before a powerful blast is released, and often the fighting is over before then.

Generally, the gameplay is quite good for a side scroller, but several issues are present that need to be addressed. On occasion, the path takes a turn around a three-dimensional curve, something not seen in side scrollers previously but adds a good effect to the game. Unfortunately, you are unable to shoot at enemies that are just around the curve as the bullets continue on a straight path, just a minor oversight by the developers.

Duke Nukem: Manhattan Project is generally an entertaining title, but has a few minor flaws that compromise the replay value. The game is quite long; eight missions do take quite a lengthy period of time to complete. From the well rendered environments to the slick sound effects, Duke Nukem: Manhattan Project is a well-rounded title, and has proven successful as a side scroller, something that hasn't been done in a long time.