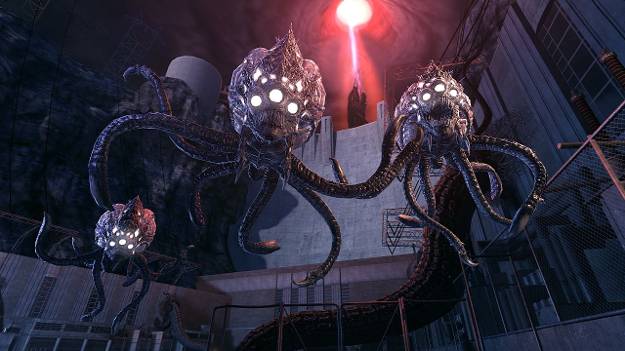 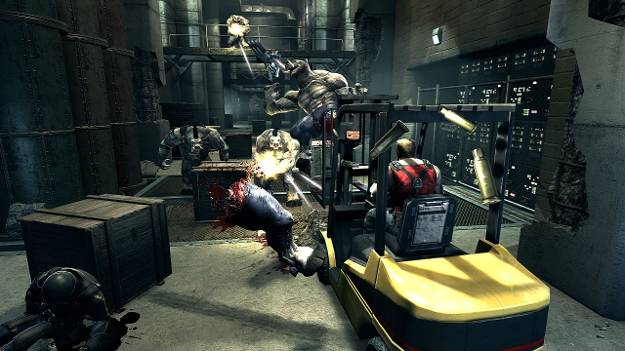 The question that is on everyone's mind with the long awaited release of Duke Nukem Forever is this: does age and time, like with a good wine, make a game better? In the case of Duke Nukem Forever, the answer is a resounding no. After over a decade of development, numerous restarts and developer changes, Duke Nukem Forever is not the Duke you remember. In fact, everything you loved about the original game will be ruined, your fond memories destroyed and your wallet a bit emptier, all for this unappealing and extremely unsatisfying game.

The original Duke was released way back in 1996 and was an entertaining shooter starring a main character with a bad attitude and some comical one liners. After its success, a sequel was announced and anticipation grew. As the years went by, the game kept getting pushed back and many wondered if this game would ever see the light of day. Unfortunately for us, Gearbox decided to save the game from the abyss of a blackhole and today we once again play as the crude and muscular Duke Nukem. Unfortunately for Duke and Gearbox, in the time it took to release this game, we have seen games with breathtakingly photorealistic graphics, engrossing storylines worthy of comparison to cinema, and characters we can empathize with. Duke Nukem Forever is none of these things, and does not even deserve comparison to current day B list shooters.

The plot of DNF is rather simple, if non-existent. The aliens Duke once saved Earth from are back, and this time they are out for revenge and our women. Duke takes it upon himself to save the world from these alien creatures. After some unmemorable dialogue you go against the president's wishes and take aim for these invaders. This essentially sums up the story in DNF; it is boring, it is weak and it does not compel you to care about the characters that populate this empty and bland world. The few characters you will meet blurt out their lines, often without even looking at you, and then just stand there motionlessly and aimlessly waiting for you to leave. The atmosphere and plot do nothing to draw you in and turns the game into being nothing more than a 'go from point a to point b' shooter, about as linear as you can get.

Overall, the game feels rushed and thrown together if you can believe it. The game will stutter without cause, damage models are essentially devoid of any type of realism, and online lag will make you yearn for a different multiplayer experience.

The gameplay, which in many cases can redeem a game from a poor story is as bad, if not worse. Gunplay is unfulfilling as enemies just throw their arms in the air and fall limp once you have killed them and damage models are nothing more that flying blood. You will be fighting the same three or four aliens over and over throughout the game, save for some boss characters. These boss fights are nothing more than bullet sponges that require you to take them down, execute a quicktime event, and if need be, rinse and repeat. There is no "wow" moment with any of these bosses, just more of the same generic gameplay. The guns are limited too, with the more unconventional weapons such as the freeze and shrink ray scarcely seen save for a small number of levels. The variety is also hindered by the fact you can only carry two weapons with you at any one time.

Like many shooters from the mid to late '90s, the level design makes it obvious you are simply moving from kill room to kill room. Typical levels consist of slamming open a door with your foot (why can't he just open it like a normal person?) with the doors closing behind you. What will occur next is repeated dozens of times throughout the game; enemies will pour in, you will kill them, and then you will move to the next kill room. There is little deviation to this formula, and even levels that occur outside are just as straightforward and unexciting as these indoor incursions. You move from one position to another, killing the same enemies over and over, spurting out the same unfunny lines. Frequent and long load times will have you groaning every time you die. Unfortunately this will happen often as the game can be rather cheap as it throws enemies at you without a chance of properly preparing yourself. If I were Duke and the world was this boring, I'd probably just let the aliens win.

Platforming, which is surprisingly a large portion of this game considering it should be known for its mayhem and carnage, suffers from all the same pitfalls as the other parts of the game. You awkwardly jump from one platform to another, sometimes in a shrunken form, and avoid obstacles like electrified water or burning grills. Combined with this rudimentary platforming are laughable attempts at puzzles. These puzzles can be as simple as using 'physics' to push a cart underneath a button so you can reach it, or awkwardly directing an alien ball into a switch device. These physics puzzles will not give you any of the satisfaction you'll get from games like Half-life 2 and are merely crude attempts to prolong sections of the game and split up the poor pacing of the game.

Another of the ways Duke avoids conflict is spending long periods driving in four wheelers that handle like boxes on wheels. One section sees you driving around in a miniature RC version of your truck and another will see you taking a long drive out in the bland desert of what is supposedly Nevada. These driving sections aren't all that entertaining, take too long to complete, and employ 'running out of gas' to prolong these sections. Every five to ten minutes you will stop, take out some bad guys and find some gas cans to refuel. It's during these stage you also see how scripted the game is.

To further bring down the overall experience is the horridly bland and colorless world that you inhabit. There is no art direction, the game is just a pile of grayish blah that poorly blends together, and looking off into the distance, especially while zoomed in with a weapon is a blurry mess. To further this complete lack of attractiveness to the world is outdated graphics, that may have been top of the line half a decade ago, but now just further emphasize how bad the world looks. What is even more confusing about this then is how poorly the game handles at points. Your system or console will crawl to halt at random and without fail every time you smash open a door the game will become a slideshow. It's understandable why the graphics are a bit outdated, the game has been in development so long that another reboot wasn't acceptable. But with all this time, you would have at least thought that the developers could have created a smooth experience over every platform.

The final element that Duke Nukem used to have going for it was its crude and comical one liners. Who can forget 'It's time to kickass and chew bubble gum, and I'm all outta gum'. It may be that we've become more sophisticated or that fifteen years ago these types of one liners were more shocking and laughable, Whatever the case, Duke Nuke Forever is not funny. Not only does Duke spurt out line after line of unfunny dialogue, he repeats himself so often you just want him to shut up. More to the humor is the attempts at being crude, which fails, as slapping fake tits on an alien wall and seeing abducted women moan as they're being raped by alien ships is just not funny in any way, shape or form. It's all done in bad, if not extremely misogynistic taste.

If not a bit ironic, Duke ends the game with a line about how 'crappy' the ending was. Well Duke, that just about summed up the entire game. There are no redeeming qualities about this game, the shooting, weapons, enemies, gameplay, platforming and driving all combine to be one extremely unrewarding experience. If it were not for the fact this game has had so much hype and been in development for nearly fifteen years, this game would not be receiving any attention, because it does not deserve any. The real question is for Gearbox Software. How could you save a game, stating you could not allow it to just 'die' and then put out something that is so universally unenjoyable on almost every level? Duke Nukem Forever is everything that is wrong with games. Calling this game generic would be a compliment, because that might mean it's like every other shooter out there. It is in fact quite the contrary.