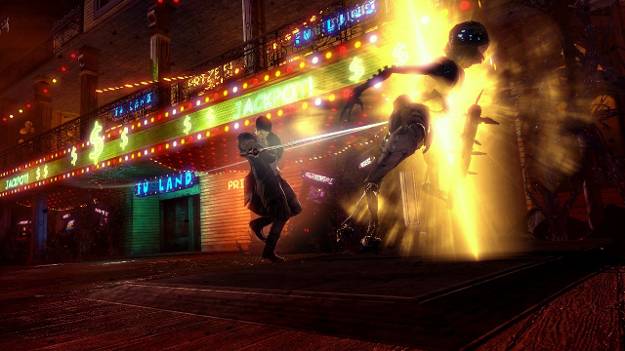 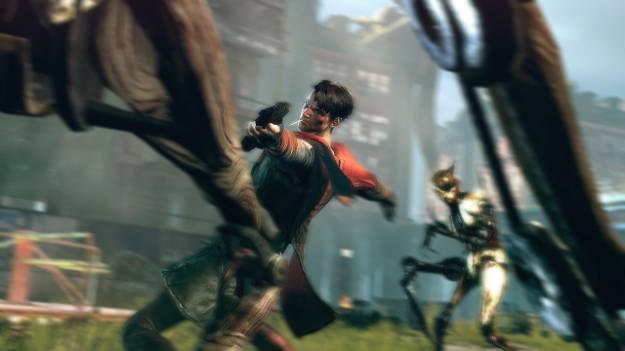 In North America, Anime is a polarizing thing. Depending on your age, and exposure during college, you either love it or you hate it, with few in-between opinions.

So if you avoided Devil May Cry in the past because of its clearly Japanese look, you might want to try it now. The Capcom franchise has moved to a North American developer, and it's gotten a makeover. The new game originally got slammed for that, but there's more to this reboot than Dante's darkened 'do making the fans' collective hair go white.

I hadn't followed the fan freak outs as this new game has been developed. So I sat down at the demo station, squinted at Dante on the screen, and immediately said "this looks different". Cue sheepish response from the Ninja Theory game rep. It's obviously been a rough ride for them. 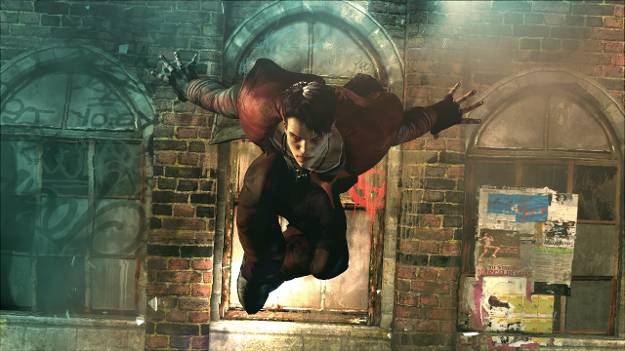 As the name suggests, Devil May Cry hinges on a struggle between good and evil. Dante has been reconceived as half-angel, half-demon, and has the powers of both at his command... and some ghost chick with a whispery voice that occasionally interrupts the slaughtery combat to be generically annoying. The series' style grading is back, as are some weapons from the past, including the pistols Ebony and Ivory.

The newest Devil May Cry plays in a similar way to God of War. It does many of the same things as the previous games did, just in slightly different ways. Combat is still fast, varied, and powerful. You're doing some pretty awesome looking stuff fast, even if you only get a C as a style grade.

You can jump and glide, and you have ranged, light, and heavy attacks that you can alternate for impressive combos. The demo showed off a pretty sophisticated one-button combo concept based on timing. It's tricky, but if you pause long enough at certain times in the middle of a sequence, you can perform a special move.

Not surprisingly, little was revealed of the story of the game, but it sure looks pretty. Some platforming challenges were also present in the demo, and it showed a little of how levels gradually unlock as more areas are revealed to explore. You navigate the colorful, maze-like level until you encounter groups of enemies you can pummel, melee, and launch for air combos. When they die, they release red orbs, which, for the record, DmC did before Kratos. Destroying various cameras positioned around the map opens up new areas to explore. 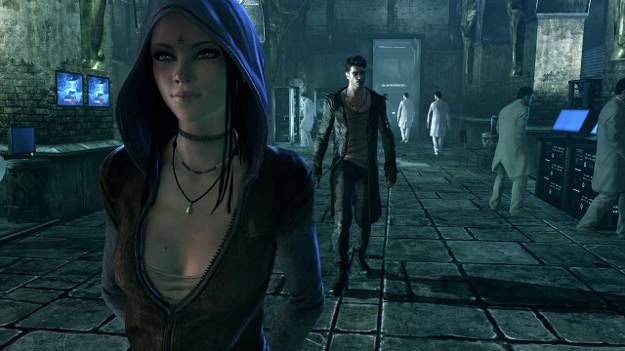 Why all this was going on, I have no idea. There was a vague theme of escape, but since this is a reboot, it's too hard to make assumptions. Perhaps I was distracted by the girl pole-dancing in the middle of the demo room. However, the pick up and play combat system has me interested enough to give the game a try when it comes out: even if the story sucks, we're guaranteed some fun fights.

It might not be the old Devil May Cry, but many of the fundamentals have been maintained. Though it might lose me core-gamer cred, I'm okay with saying that not all is lost as Dante gets a new origin and story.