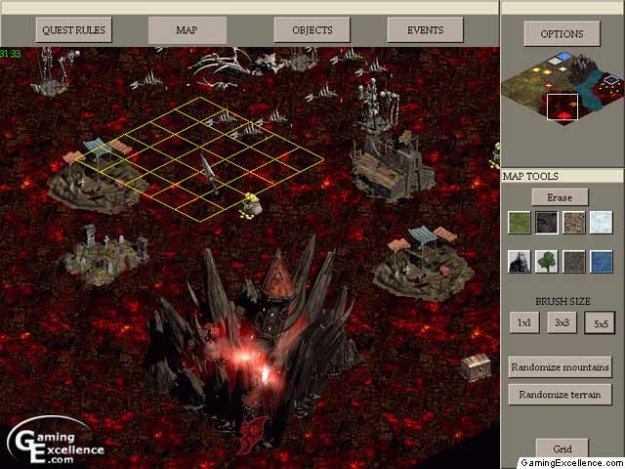 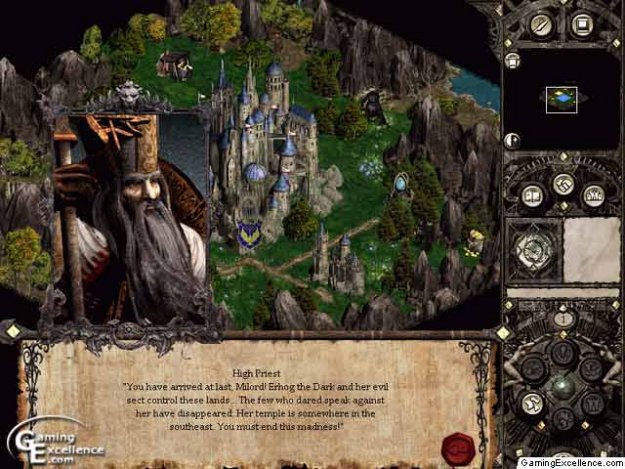 Disciples II: Dark Prophecy is a strategy title, although in a way it can be seen as an RPG as many attributes are shared between them. Although I have been a heavy gamer for many years, I have never been overly fond of the RPG style of games. They rarely derive any interest from me, usually I find them somewhat boring and unentertaining. Although Disciples has both characteristics of an RPG and a strategy title, I think it has just made me change my mind.

Published and developed by Strategy First, Disciples II: Dark Prophecy is a turn-based real-time strategy game with a complex storyline and a generally good concept. Based off the original Disciples released in 1999, Disciples II takes this same style storyline, and improves on the original in nearly every way possible. Although the original was not a huge success upon its release, it slowly gained recognition as time passed, to the point that it became seen as one of the better strategy games on the market. Disciples II: Dark Prophecy will most likely follow this same trend.

Usually, I don't open a review with the graphics of a title, but in this case I feel its necessary. Disciples II: Dark Prophecy contains jaw-dropping graphics, absolutely gorgeous in virtually every way possible. Although the environments can be a little crowded at times, the detail and visual quality in each object is spectacular. Characters contain beautiful and fluent motion animation. When casting spells and engaging in combat, the character detail is remarkable, yet the performance has been optimized to run well even on low-end systems. The artists at Strategy First deserve a solid pat on the back, as they have taken Disciples II to a whole new level of visual quality.

The story begins shortly after the conclusion of the first. The same four factions as in the original are the main points of focus, these consisting of the Empire, the Legions of the Damned, the Undead Hordes, and the Mountain Clans. The Empire is a race of humanoid warriors, similar to those that would have been seen long ago in human history. The Legions of the Damned are a very interesting faction, demons from the underground world of hell. The Mountain Clans are a race of small dwarf like creatures, although carrying a human appearance. The Undead Hordes were once a proud and noble race, until Mortis unleashed a plague killing most of them off. She continued to create an army of mutilated creatures, most of which were her victims in the plague; the result is the Undead Hordes faction.

For anyone new to the RTS or Strategy genre of games, it will take much practice before you will actually understand what is happening in the game. If you have yet to play the first in any detail, the storyline can become extremely complex and confusing at times. Unfortunately, the tutorial is not overly through and difficult to find, and the manual is not much better. Although it outlines the general concepts of the game, it is lacking when it comes to explaining how everything ties together, and how to simply play the game.

As in most other strategy games, resource management plays a crucial role, and the balances in Disciples II: Dark Prophecy are very good. Several different resources can be collected, these including Mana, which is used for spells, and gold that is used for constructing buildings. Players are limited to constructing one structure per day, and this is well developed as one day spans a time period of one turn. Each addition to your kingdom will cost a prespecified amount of resources, and will allow you to develop new spells or create an army depending on the structure built.

Disciples II includes a wide variety of modes of play, these primarily consisting of single player and multiplayer availabilities, as well as a complete scenario editor for added replay value. The single player modes consist of complete full-scale battles where players select a race and compete for victory. Also included are a variety of scenario-type missions, where you can choose from the specified races in the scenario and attempt to accomplish the task at hand. The multiplayer mode in Disciples II Dark Prophecy is primarily accomplished using the GameSpy connection software included on the CD-ROM. This third party software acts as a connection gateway, a matchmaking service if you will. It lists all available games, and allows players to quickly and easily connect to an available server. Disciples II: Dark Prophecy can also be run over a standard TCP/IP connection, or using a Local Area Network.

Disciples II offers players the ability to play as one of three different character types, "Warrior Lord", "Mage Lord", or "Guildmaster Lord." Each of these character types has their own advantages and disadvantages, and it is important that you select the best option for the mission and your style of competition. The Warrior Lord is primarily used for heavy combat, as the fighters will automatically regenerate 15% of their damage per day. Warriors are limited to one spell per day, and can only achieve a level four spell casting ability. The Mage Lord can cast two spells per day, and only requires half of the mana to research new spells compared to other lord types. The Guildmaster lord is similar to the warrior lord in the effect that more traditional combat techniques are used. The difference between the two is that the Guildmaster lord can use thieves in his conquest.

The maps included in Disciples II: Dark Prophecy is well developed, but can be somewhat crowded at times. Since the display is limited to 800x600 resolution, some units can be lost behind objects. When moving characters, the buildings and objects can sometimes obstruct parts of the pathway, making it difficult to control character movements. If the resolution could be increased a little higher, the maps could be improved somewhat by spacing the objects out a little more, and would better present the game and allow easier play.

Unlike most strategy games, players really only control a handful of units in Disciples II, leaning it towards the idea of a role-playing game. Although you may only control a small number of units, each unit you select will play a critical role in winning the game, and often, you will find yourself reverting to previous saved games if a hero is lost in battle. Lucking, the game is automatically saved after each turn, so you can return to a previous game very easily with little effort. Building parties of units requires time, and usually several turns. These whole parties including their leaders can be lost in a single turn, and this can mean the difference between winning and losing.

Disciples II: Dark Prophecy includes a solid AI model, but even on the simplest settings, the game can be extremely challenging. Even the most experienced players can always find a challenge in Disciples II: Dark Prophecy, as the AI will change their strategy to counter anything you can come up with, especially on the more difficult settings. Generally, the AI is well developed, the only suggestion being an easier mode for beginners.

The developers at Strategy First have added a lot of replay value to the title through the single and multiplayer campaigns, but the map editor bundled with the software is only an enhancement to the already entertaining title. This editor allows players to create their own maps from the ground up, adding terrain features, and customizing the map to your liking. By adding units, placing objects and resources, and adding objectives and strategies, the quest editor adds a lot to Disciples II: Dark Prophecy, something that is a big positive overall.

Although the gameplay is nearly identical to the first, the visuals are the largest enhancement. For anyone who enjoyed the first rendition, Disciples II: Dark Prophecy is a must have, as the updated visuals and general improvements make this a well-rounded and addictive strategy title.