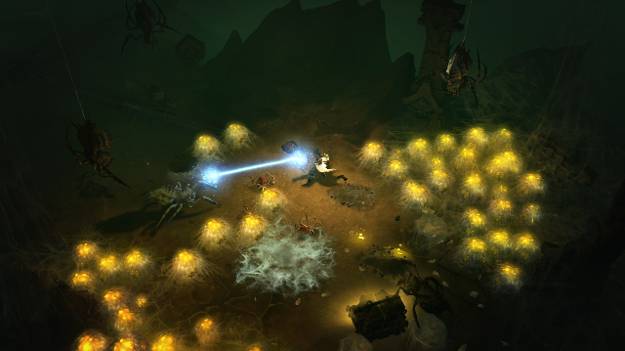 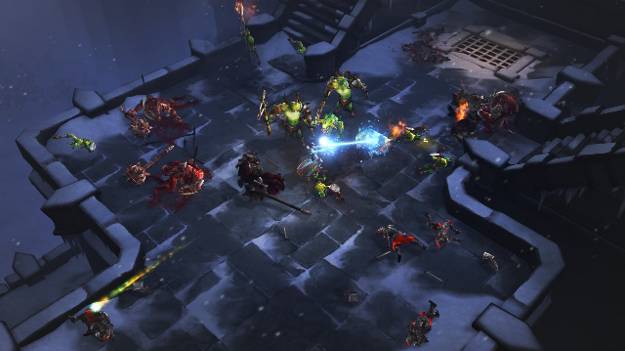 I'm pausing my game for a few minutes to tell the rest of you who aren't playing Blizzard's Diablo III why you might want to reconsider that decision. In fact, I was expected to do this much sooner, but it's been a while since deciding between opening my text editor or the game was quite this subconscious.

As much as I've played and want to keep playing this game, I've had a hard time rationalizing why. The fact is that this game isn't really as impressive as the vast majority of fans, myself included, were expecting. It's good, but it's not mind-blowingly awesome. I think it might be impossible for a title to ever live up to a decade's worth of expectations and anticipation, but Diablo III manages to stay true to form by expanding on the original concept without making too much of a mess. Heck, setting expectations is the first and most important battle. Duke Nukem Forever expanded on its original concept in the only way I think it could have, but was met with a world where that concept was no longer socially acceptable on that scale. In that light, Diablo III deserves points just for being appealing to its audience beyond launch day. In fact, after all the launch disasters and the subsequent bitching all over the Internet, the vast majority bitterly went back to actually playing the game.. but more on that later. 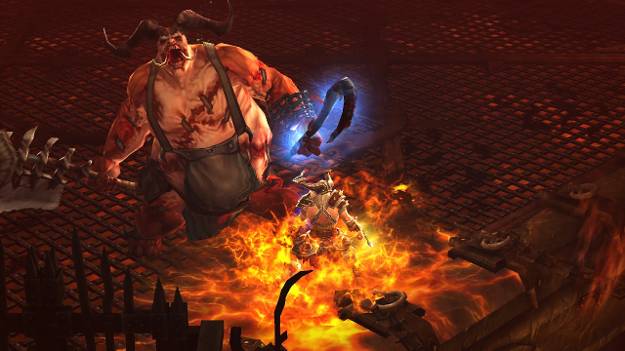 Diablo III is the perfect fantasy game for those who aren't into, or are scared away by the complexities of the MMORPG genre. It's MMO- and RPG-like as far as controlling and leveling-up a single character, managing and upgrading equipment, and making decisions in a skill tree, but there aren't any quests or other features that require large organized groups and massive time commitments, and all of these characteristics are moderately optional. Ultimately, this game could even be played as any other hack-and-slash, but you wouldn't get much fun or value out of it, let alone any hope in hell of beating it on any but the easiest difficulty. In contrast to an MMO, the best part (besides the absence of monthly fees) is that there's a singleplayer mode that can be enjoyed quite thoroughly without the risk of being pwned like a n00b by a l33t. This has been the case since the original title, but no longer is there a division between the singleplayer and multiplayer modes; friends and even random people can drop into your world if and when you want them to. This comes with the nefarious drawback of requiring players to be online and logged-in at all times while playing, and I'm fairly sure the means was worth the end.

The game itself takes players into a world again overcome with evil as a badass hero that just shows up out of nowhere to fix everything. There are five character classes to choose from and, this being the third title in the series, they're not the bland classes you'd expect. Each is an original variation on more common themes with perhaps intentionally flawed characteristics that make the choice more judicious than usual. They're also sufficiently varied to warrant a second and perhaps third playthrough, making the game's length more palatable at roughly 25hrs per. That's considerably more than you'll get out of the average AAA title, but is a far cry from what you got in the first Diablo, though the latter owed most of it to grinding through repetitive dungeon floors.

What really maintains my interest in this game is the brilliant visuals combined with the constant additions and novelty. While the original game had players going through 30 floors of fairly rectangular and monotonous dungeons, Diablo III introduces new environments and monsters about every 15 minutes if you're not taking the scenic route. I do however end up taking the scenic route almost every time, just to uncover all the details in the landscape. The scenery is even more welcomed if you recall that there wasn't any land to explore outside of the main town in the first title. Even better, many of these tangent dead-ends contain books which reveal more of the story and come with experience bonuses. While these environments look spectacular and are incredibly detailed, it hasn't slowed down the game's ability to randomly-generate dungeons, making every playthrough different and unique. What's different this time is that it won't bore players by forcing them down those 30 floors, opting instead for more numerous yet shallower dungeons. Other than the nostalgia, the desire to explore every corner of the world, to defeat every abomination and to create an unbeatable hero is why I'm still logging on every evening. 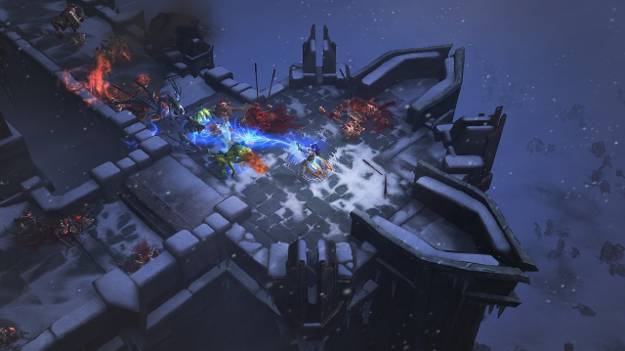 The unfortunate part is that the core parts of the game are very unimpressive. The story is less compelling and considerably less creative than the original. While the main story line gives players a fairly loose explanation for the state of the world, there's a whole slew of NPCs that have terribly boring backstories to tell you. Honestly, I end up just walking away from them more often than not. What's worse, the game mechanics and gameplay remain largely unchanged. To be fair, the original title nailed those elements pretty well, and while the expected new variations on attacks, skills and upgrades are more than satisfactory, changing those elements any further likely might've inspired a bigger riot amongst the more dedicated of fans. Still, there are a few elements that are quite obviously broken. First, the portals strewn about the land to help players move around faster are completely useless given that the storyline is linear and the "town portal" ability, learned early on in the game, will bring you to town and back from absolutely anywhere. Second, there's absolutely zero value in picking up non-magical loot dropped from enemies as these only earn you a few gold coins at a merchant while their magical counterparts sell for dozens to hundreds of coins. The time spent portal-jumping back to town could have best been spent finding just one more magical item, not to mention the many more you could fit in your inventory taken up by trash. Third, buying items from merchants is just about useless after the first half hour of game time, as the addition of item crafting (borrowed from the MMORPG genre) almost always produces better items for a cheaper price. Lastly, I don't understand why you'd ever need the item auction house, another concept borrowed from the MMO genre that allows you to buy/sell items for real currency. That's like buying a walkthrough or looking up the shortcut to the end. Why would you pay more money to shorten your game? It's not like this one has hours of grinding required.

The game itself is great but probably won't have a lasting impact on the gaming world, and as with many others, will likely be forgotten within a year. The packaging and delivery method however, has myself and gamers worldwide seriously concerned about the future of PC gaming. Blizzard has tried to fix a bunch of fair problems with game development with absolutely terrible solutions. It's not necessarily new, but the scale and attention that the game is receiving is hardly helping. Naturally, their marketeers cleverly chose to add these things in a game that has broken sales records for a launch, so they can go back to their bosses and say "see, nobody minds the changes." Of course, those sales were surely a byproduct of the success of the game's predecessors more so than the worth of this particular title, but that won't matter. 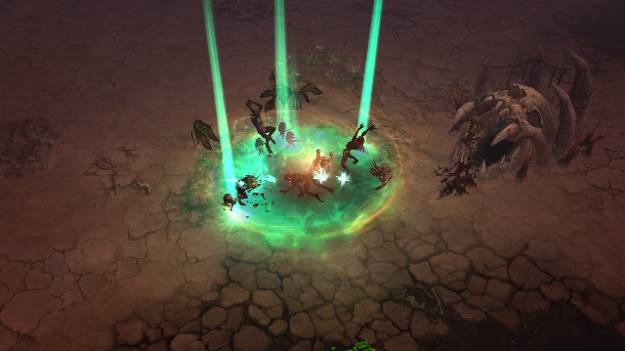 This is the part where I'm inclined to write a rant about the terrible delivery model, the annoying auto-update mechanism, and the launch week login problems. I can write a clever rant as much as the next guy, but the Internet and Diablo's forums are already full of them. There's a solid article at cracked.com that's well worth the read. I'd offer solutions if I thought I could come up with something that clever developers haven't already suggested only to get muted by the higher echelons of management. The reality is that for gamers to attempt an organized revolt against these practices is about as likely and effective as an annual boycott of gas stations. We're all going to keep buying and playing the games, and we'll have to accept the drawbacks imposed upon them. Luckily these issues were largely temporary and short-lived, though they may likely reoccur when another big title gets released relying on Battle.NET. For those of you that aren't on a high-speed connection, this game is only continuing the trend of treating you like second-rate consumers.

Diablo III is not, as I was expecting, a video game version of The Avengers. If you go in expecting a continuation of Diablo I with better graphics and more stuff, then you'll be pleasantly entertained. Three times the awesomeness of the first, it certainly isn't by a long shot.

A quick aside, as a Mac owner and gamer, I feel it important to warn everybody that the performance of D3 on OSX is absolutely terrible. At resolutions higher than 800x600, you have to anticipate where the enemy is going to be in the next frame before clicking. If you dual-boot a Bootcamp partition with Windows 7 on the same hardware, the game runs great at max graphics options. You can get similar results with an XP partition, except the poorer resource management tends to cook your hardware.