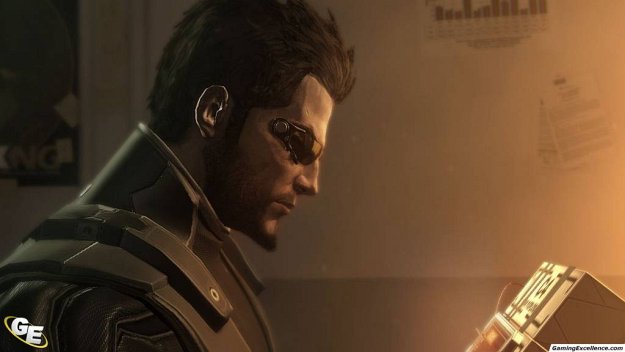 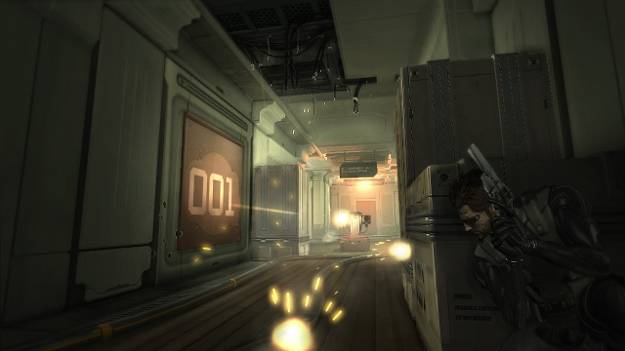 Having been privy to the game at E3, I was interested to see what more Eidos Montreal would be able to show the assorted media gathered in their studio. While they told us that we would be seeing that same gameplay, they also promised a new level that would show off the choice-filled multi-path design of the game. They weren't joking.

Deus Ex: Human Revolution takes place in the not-so-far year of 2027. Eidos's goal was to create a world with characters that was grounded as much in reality as possible, something that seems like it could be happening in the future of tomorrow. The world is no utopia either: the advent of augments that can let people live beyond their physical means has created social rifts, between those that can afford the augments, and those that can't, creating strong social divides and the problems that arise with them. It is into this world that you, as Adam Jensen, security specialist, are thrust.

The most core concept of the title is that of the four pillars of gameplay: combat, stealth, hacking, and social. With this, the developers created gameplay in which multiple solutions are always available to the player, and which 'bottlenecks' of choice are never present, allowing you to choose how you play the game. The game is also about choices and consequences, about augmentations, how they upgrade, and about how the story will proceed: some choices will have to be made by Adam Jensen that will change how the story proceeds.

The game is played mostly in a first-person perspective, though when you lock to cover, things switch to a third-person mode. The inclusion of this was part of a decision to make the game more tactical: running through the levels like Rambo is not something that will keep you alive for very long (though, they note, it is possible with the right augments and upgrades). It also allows the player to be 'rewarded', as producer David Anfossi puts it, for using augments such as takedowns. Being able to watch Jensen see an enemy through a wall with x-ray vision, punch through it, and take him down in one fell swoop does have quite the appeal, I admit.

But while cover has its uses in a full-blown combat, it's also used a lot in stealth, which has an important place in this latest Deus Ex. Based only on sound and line-of-sight (avoiding mechanics like light and darkness), making your way through the game without being seen is a definite viability. We're told, in fact, that it's possible to go through the game without accruing a single kill – except for bosses.

We saw two different demos at the studio: the first, one some of us had already seen before, was the one shown at E3 this year. It showed Jensen investigating the location of a hacker in a two-tiered city filed with bright neon and slummy conditions. Making his way through a club known as the Hive, we were shown the dialogue system and the 'social boss fights', as they were referred to. It was all about figuring out what to say to the person we were talking to in order to get the information Jensen needed – that is, where the club's owner was. For the purposes of the demo, the conversation failed, and Jensen was forced to find an alternate route to get to where he wanted. Overhearing a conversation allowed the player to get to a pocket secretary (basically a PDA), giving him a code to use on a locked door.

From there, with the judicious use of stealth, he made his way through some back rooms, some overly large ductwork, leading to overhearing some information about a warehouse, which we were then taken to.

The warehouse, in a more violent show of what stealth could do, had Jensen taking down enemies left and right, using augments like jumping, x-ray vision and strength, without ever being seen. From here, Jensen found some explosives needed for a diversion, leading to a cutscene, and a cliffhanger as a gun pointed at his head was fired. It was interesting seeing this all again, but what was the real meat of the demo was yet to come.

The second part of the presentation was an example of the game's multi-path and non-linear approach to the gameplay. The objective was relatively simple: get into a police station, retrieve a device from the brain of a corpse in the morgue, and get out. We were going to be shown three radically different approaches to how this could be done, and while they all differed in the method, there were even more paths to take in terms of how to enter the building, what augments you could use to do so, and so forth.

The first was the simplest, but definitely not the easiest: run in, shoot everything that moves, run out. Though the demoer was working with infinite ammo and health, it was clear that doing it this way could easily result in death and what have you, as police officers came out of the woodwork to defend the station. The objective was completed, but it took some serious work.

The next method was much easier to do, though harder for the player to puzzle out. It involved a conversation with a man at the front desk, someone whom Jensen had a past with. We needed him to open the door and allow us free reign of the station, but it meant dredging up some painful memories and forcing him to confront them before he could forgive Jensen and himself for what he had done in the past. Succeeding at this meant being able to roam around the station at will, a vastly different experience from the gung-ho approach of the first attempt. In addition to this, there was more to find, including conversations that could be overheard and backstory that could be discovered since the officers were no longer scrambling for their guns.

The third option was that of stealth. Making our way behind the back of the police station, the demoer hacked his way through a locked door, kept out of sight and out of the way of security systems (including using the unconscious body of an officer to deactivate a laser barricade), and went into the morgue just like every other time. Since no alarm had been raised, the doctor in the morgue greeted us just the same as if we had been let in, and Jensen was able to make his way out easily.

We saw a few new things here, not just the various types of ways you can get through a level. Experience was gained for completing objectives and performing feats of skill (such as talking our way through a problem, or scoring headshots). Earn enough experience points, and you gain a Praxis point, something which can be used to upgrade augments. This was an interesting thing to note, as each augment has a tree-based upgrade system, allowing you to choose what you want to upgrade about them, allowing more choice in how you strengthen Jensen.

Hacking was also an interesting thing to watch, as it's no longer just non-interactive thing you have to rely on your skill to succeed in. It plays out as a simple game of territory control between you and the security system, where each 'node' is a territory to control on your way to the goal. The security system starts out passive, but each node you capture has a chance to activate it, at which point it attempts to take back nodes and make its way to your entrance node, at which point the hacking fails and the alarm goes off. It's an interesting game of tug of war that looks like it'll actually make digital espionage fun to accomplish.

It looks like the third Deus Ex game in the series is looking to both reinvent itself and return to the elements of the series that really made it fun. Set to release in February of next year, Deus Ex: Human Revolution is really looking like it's going to bring all the fun of the original back in a new, modern package.