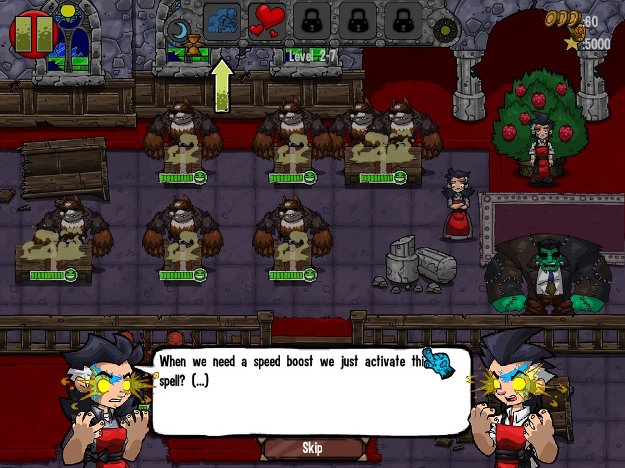 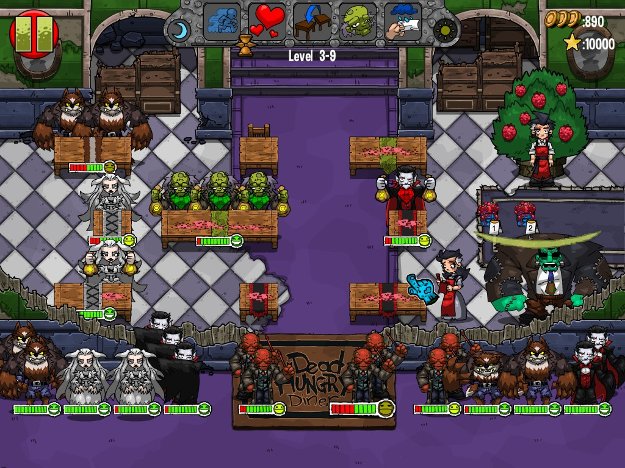 With the zombie craze continuing its popularity streak, many zombie/undead-based products continue to appear on store shelves including this neat twist on a tried-and-true game style. Dead Hungry Diner by Black Market Games is a quirky take on the react-and-click style of game, mixing great visuals and some silly humour as you strive to have both time, and hungry dead things. on your side.

The general premise is that dead creatures, such as zombies and vampires, are starting to overrun  the small town of Ravenwood. After learning the monsters are simply hungry and will happily leave the town alone if they’re fed a bucket of brain berries, Gabriel and Gabriella, orphan twins from the town, take it upon themselves to feed the hungry dead at their very own outdoor diner to save the residents from being eaten themselves. 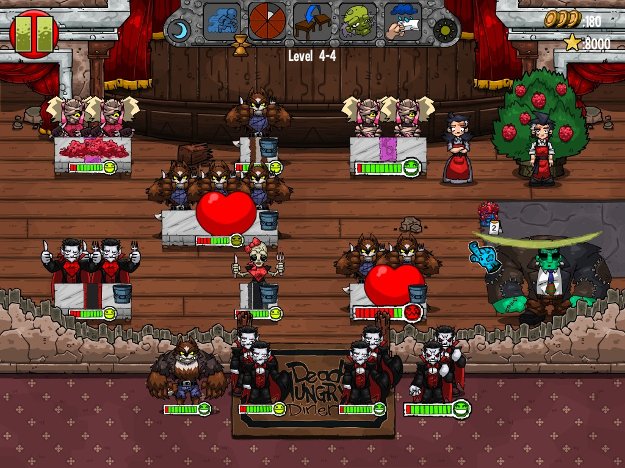 Just like many games out there, the first few levels are more tutorials than anything else, teaching you how to place creatures at a table, feed them, and clean up once they’re done. Anyone who’s played Diner Dash will immediately be comfortable with this style of play as it’s very similar in that regard. As you progress, however, the game gets difficult quickly. This is great if you’re one who gets easily bored and appreciates a challenge but not so great if you just want to live the simpler kind of dead diner life.

Initially you start by serving zombies, your easiest customer (yes, they’re customers as the creatures do pay you for every meal), followed by irate zombies that should be served first to avoid the loss of a sale. As you learn to juggle the two, more creatures, such as vampires and werewolves, are introduced and, with them, more game mechanics come into play. Learning strategies such as how to seat the same creature at the same table back-to-back for bonuses, and avoiding seating certain creatures side-by-side (if you place a vampire beside a werewolf, fangs and fur will fly), is integral to the success of your feeding the creatures of the night.

Other characters appear as the story progresses to help or thwart your efforts, providing some comic relief while adding more helpful or challenging elements to the game. Some of these characters include Frankie, a muscular monster who volunteers to be your bouncer, Shady, a shady character (harhar) who sells you upgrades and spells that will help you manage your diner, and Vandra, a woman who continually tries to thwart your efforts by casting spells on your patrons in her attempts to destroy them.

While playing story mode, your mission is to earn at least one star in each of the dozens of levels that are spread over five different locations. Achieving bonuses as you keep your customers happy and fed, such as doing the same action two or more times in a row and ensuring the same monsters sit in the same seats as often as possible, will help you achieve up to three stars for your efforts. If you want to add to the challenge, there’s an “all-you-can-eat” mode where it’s nonstop diner action that tests your endurance. The only downside when playing any mode, however,  is there’s no way to cancel an action once you’ve selected your target chore, costing you precious seconds as you strive to be the best dead hungry diner you can be. 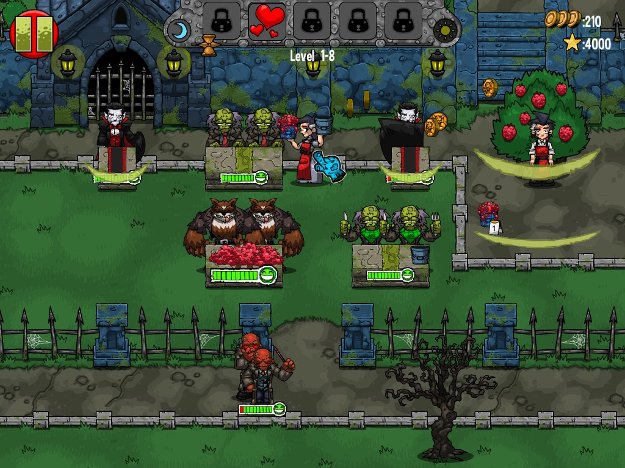 In addition to the addictive gameplay, the graphics are stunning, feeling crisp and vibrant in their detailed 2D form. The catchy music, plus the unique noises each creature makes as they visit your establishment, also adds to the experience as it really gets you into the groove of things.

It’s obvious a lot of effort was put in to make the game an overall impressive package.  With the combination of visuals, music, fun characters, plus the added elements of difficulty and fun as you progress, it truly feels like a chaotic diner experience that you, and only you, can manage.  Dead Hungry Diner is available and ready to be served on your PC.