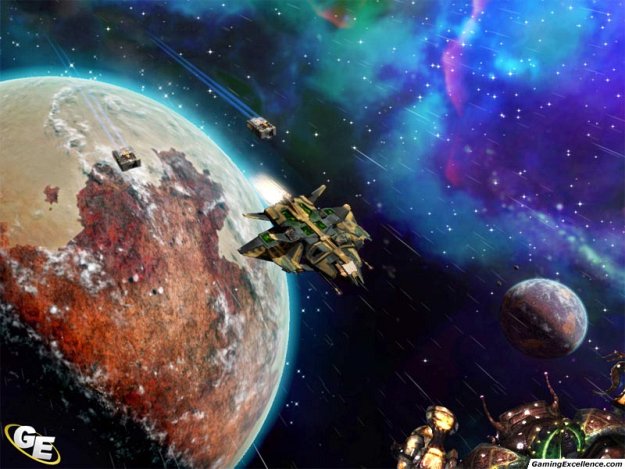 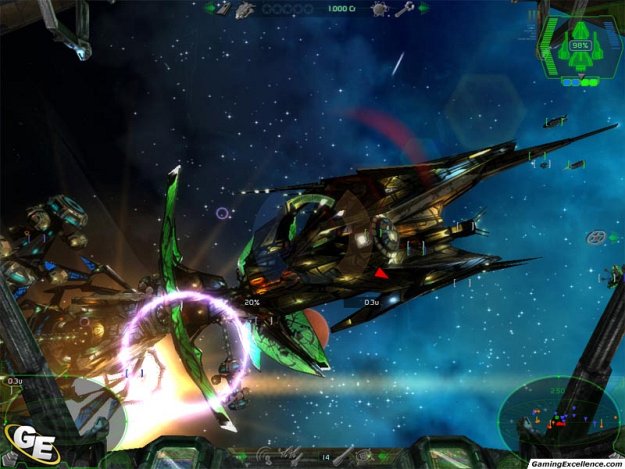 Sometimes a game doesn't need to be innovative to be enjoyable. Sometimes you don't need new ideas and concepts and designs, something Katamari-esque to have fun with. Sometimes a game can take an old concept, add a little dash of idea here and there, and still be a satisfying experience to play. DarkStar One is one of these games.

This is one of those games where you take a look at it and realize that you've seen much of everything that's happening in front of you before, but at the same time, you don't really care. DarkStar One is a free-roaming space shooter, with minute RPG elements hidden within the gameplay, such as a reputation that can have slight consequences, and how your ship grows in strength. As Kayron, you'll be flying from system to system, completing jobs and gaining credits, everything that's typical of this kind of genre, while every now and then a well-made cutscene will deploy to progress the storyline.

There's the system-hopping, to start with: you'll be going through hyperspace between each system, which usually consist of a planet, a trade station, perhaps a research station or two, and some assorted color in the form of a shipwreck, anomaly, etc. The game boasts 'over 300 solar systems', but they're not exactly very diverse. There's no real point to explore them either, other than to look for an artifact that you already know is there.

Speaking of artifacts, that's one of the few ways DarkStar One diversifies itself from the rest of the pack. The ship you command in the game is unique, and consists of biological parts. As you cruise through the universe, having lots of fun, you'll find artifacts that your ship will absorb once you approach them. Often these artifacts are found within an asteroid or after you fight off a swarm of pirates that have taken over a particular system. Once you get enough of these green glowing things, your ship will gain a level, allowing you to improve one of three different sections on it. How you improve your ship affects everything from maneuverability, hull integrity, or how quickly your energy recharges. While this does add a little to the game, it seems something of a superficial task to hunt down the artifacts, since your star map already displays the systems that they can be found in. It becomes almost something of a chore as you go from system to system; just reading down the list of places you need to go to collect another green blob. A more imaginative approach would have been appreciated, but nevertheless, it actually gives you a reason to visit more than a couple systems per cluster.

The other item that the artifacts are used to upgrade is the plasma cannon, an oddly-named device that performs a variety of tasks for you. You start off just with the ability to boost your weapon energy recharge rate for a short period of time, but every time your ship levels up you can add new abilities or strengthen those you already have. The device is exceedingly useful while in pitched battle, but one of its greatest shortcomings is that is it a hassle to change what effect you would like it to have at any given time. If, for example, you want to switch to 'shield recharge' instead, while in the midst of battle this could take long enough for you to get killed. Most of the time it feels better to upgrade existing abilities just to avoid the hassle of having to change amid explosions, and that just cheapens the entire weapon.

While you do get a bounty for shooting down pirates, the bulk of your wallet will be coming from the missions that you can take on each trade station. There's a surprising amount of variety in these randomly-generated missions, allowing you to do the standard hunt-and-destroy and escort missions, but also giving such options as listening in on conversations using a long-range microphone, or taking pictures from various waypoints in the system. They don't get too repetitive, and the rewards get higher as you play further into the game, meaning you won't need to do a dozen missions just to get a single piece of equipment.

That's not the only way to fund your weaponry, though. You can take on cargo on any trade station and perform the classic buy-low-sell-high game of economics that finds its way into every one of these games. It's fairly easy to make profit wherever you go, but if you want to make that extra bit of cash, you can take certain goods to certain systems where they...ah, shall we say, might not be appreciated by the authorities. Smuggle these goods past the cops and you'll be raking in some heavy profit. Then, if you want to ride of the bad side of the law, just start blasting down trade convoys and stealing their goods. The problem with this plan, which always seems to pervade the illegal activities in games like this, is that it makes everything much, much more difficult for not enough profit. You'll get the police on you, and if you shoot them down you become even more of a wanted criminal in a GTA-esque system of one to five stars.

The biggest problem I've found with the game is the lack of any real challenge, particularly in the enemy AI. There's a scale you can move in order to increase the challenge, but this does little besides change damage amounts. The enemies themselves tend to just fly in circles around you; usually just letting the auto-aiming turrets mounted on their ships do the damage. What this means is that at times the combat can boil down to little more than a shooting gallery. The combat features a startling lack of strategy and can get very repetitive if it goes on for too long.

As I stated before, some games don't need to be different to stand out. DarkStar One is the game you might have played before, but everything that you've seen before is done just as well here, if not better and still makes for an enjoyable experience.