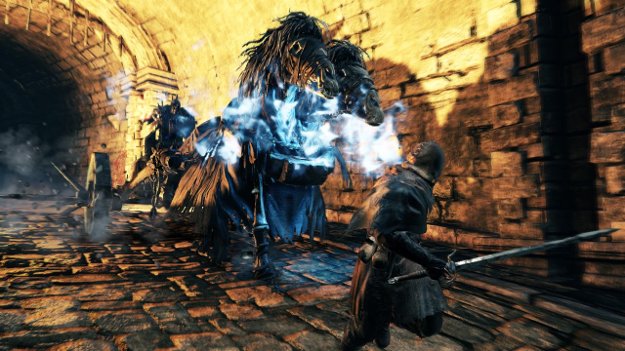 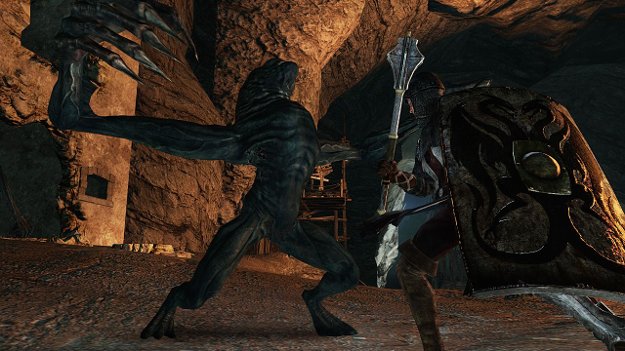 After my fourth death during the demo of Dark Souls II, I really wanted to snap the controller in half. And yet, I still wanted to play more and more.

That is the alluring siren song that the Soul series sings to its players. When you die, it makes you want to do better. Its challenging gameplay are for a serious sect of roleplaying gamers. This is not a series that holds your hand. You may get a quick tutorial that tells you the buttons, but after that THAT'S IT! You are left on your own to fight and to die. And make no mistake: you will die a lot.

Things will be a little different with Dark Souls II, you will no longer get preset classes to choose from and then manage your stats. Now, you choose your beginning stats from the beginning and then you build up your character from as you progress.

The developers at From Software have indeed listened to what their fans have wanted and have made some adjustments to the game. For starters, Dark Souls II will run on an entirely new game engine. Also characters will now be able to perform true duel wielding. Before, you could carry two swords, but never swing them simultaneously. Now, that has become possible. However, doing this action will take quite the chunk out of your stamina bar and you may want to be more frugal on how you use it as the AI system has also been improved as well. One key thing the developer pointed out was that it won't be so easy to keep backstabbing people as now you must truly be behind them to land a proper backstab. Also, some enemies are immune to it as the developer stated that the Turtle Knight; a new enemy that carries a giant mace and has a huge shell on its back, will trip players that try and will fall on them to deal immense damage.

As this was not the full game, the demo gave me a few type of characters to choose from and playing on the safe side, I decided to try out a Warrior-built character with the standard shield and sword setup. Slow and steady keeps you alive so approaching every oncoming enemy with shield up is a practice I like to utilize. Taking down enemies is still a trial of what tactics works and what doesn't and it is still a great idea to face them in one on one scenarios if possible as mobs of enemies can quickly down you.

As I progressed further into the dungeon, I came to a staircase that lead down into a basement. Going down there was a huge risk in either scenario. I could have gone down there as is, but with no such light on my character, I'd be nearly blinded by the darkness and could not see where enemies were coming from. However lighting a torch would light the area in question, but would pretty much make my defenses nullified as blocking weapon strikes with a flimsy torch is not an effective means of defense.

Deciding to have nearly no defense rather than being blind, I lit the torch and made my way down into the basement. As I slowly walked the dank corridor, I noticed an enemy who began throwing bombs at me. To make matters worse, there were barrels of explosives piled up in a corner. This was another key feature that the developer pointed out as the enemy's attack could blow a hole in the side of the building to create a shortcut. The key risk being you had place yourself in front of the explosives as the enemy threw a bomb your way forcing you to roll out just before the explosives instantly killed you. Something the developer playing did not do successfully.

The safety of bonfires is still present as enemies most times will not come at you after you have reached one. Also noteworthy, the developer says now that there will be persistent bonfire warping in Dark Souls II. As I warped, I was transported to a room that the developer was extremely proud of. They have created a room that now keeps track of how many times a player has died. For each death, a candle would be lit. As this was on a demo machine and many players had gone before me, the room was quite illuminated.

Moving into the gray fog, I was now standing face to face with the demo's boss; a towering silver warrior that went by the moniker Mirror Knight. Before I could acclimate myself to the situation, the boss quickly leaped across the stage and greeted me with a powerful sword smash taking out half of my health. Deciding I wanted to try and deal big damage to him, I quickly changed over to a two-handed sword. The Mirror Knight responded in kind by slamming his shield into the ground and producing a clone of me to battle. It only took two hits to destroy my Doppelganger, but in the time I spent focusing on him, the Mirror Knight took that moment of distraction to launch two blows to me that ended my life. Three more tries taking on the Mirror Knight produced the same outcome. With each time, I tried to change up my strategy learning from my mistake. The game's siren song had taken hold of me.

Dark Souls II will not be kind to players. It will test your resolve with each death, but will make you a greater player for it as it teaches you patience and to be mindful of your surroundings. Your merits will indeed be tested next March.